Aaditya Thackeray has become the first Thackeray family member to be sworn in as a minister in the state cabinet. 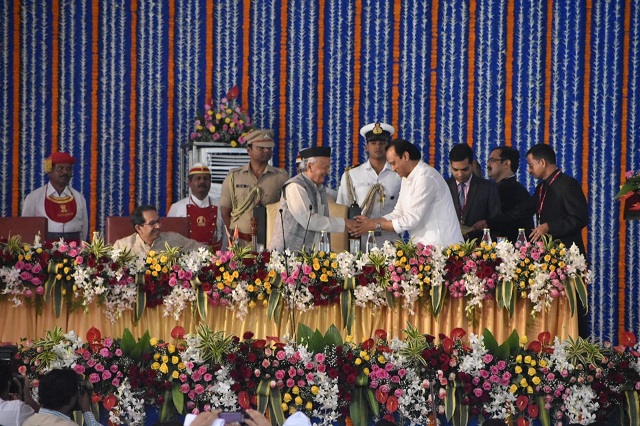 Maharashtra Cabinet Expansion: NCP’s Ajit Pawar was sworn in as the Deputy Chief Minister of Maharashtra during the cabinet expansion on December 30, 2019. Shiv Sena’s Aaditya Thackeray was also sworn in as a cabinet minister along with 34 MLAs.

Maharashtra Governor Bhagat Singh Koshyari administered the oath of office to the newly inducted Ministers in the presence of CM Uddhav Thackeray and NCP Chief Sharad Pawar at a special ceremony conducted in the premises of the State Legislature.

Aaditya Thackeray has become the first Thackeray family member to be sworn in as a minister in the state cabinet. This is the first expansion of the Maharashtra cabinet since the Shiv Sena-NCP-Congress alliance formed a coalition government in Maharashtra.

• Maharashtra CM Uddhav Thackeray expanded his cabinet for the first time on December 30 to include his son Aaditya Thackeray and 34 other legislators.

• NCP’s Ajit Pawar also took the oath of office and secrecy as the deputy Chief Minister of Maharashtra along with the 35 Ministers.

• Among the 36 MLAs given ministerial berths in the Maharashtra cabinet, ten belong to the Congress including former Maharashtra CM Ashok Chavan.

• Six cabinet ministers had taken the oath of office earlier along with Uddhav Thackeray on November 26 including Shiv Sena’s Eknath Shinde and Subhash Desai, Congress’ Balasaheb Thorat and Nitin Raut and the NCP’s Jayant Patil and Chhagan Bhujba.

• Maharashtra CM Uddhav Thackeray is yet to announce the portfolio allocation. The announcement is expected to be made in a day or two.

• According to the power-sharing formula of the Maharashtra Vikas Aghadi, the Sena will have 15 ministerial berths excluding the CM post, the NCP will also have 15, while the Congress will have 12 berths.

• The Maharashtra cabinet can have a maximum 43 ministers. The size of the council of ministers also cannot exceed 15 percent of the total number of MLAs in the state, which is 288.

Ajit Pawar, senior NCP leader and nephew of NCP chief Sharad Pawar, had in a midnight coup broken rank with the Shiv Sena-NCP-Congress alliance and sided with the BJP to support Devendra Fadnavis to form the government in the state with the alleged support of NCP MLAs.

In a dramatic move, Devendra Fadnavis was sworn in as Maharashtra CM and Ajit Pawar was sworn in as the deputy CM in an early morning ceremony on November 23, 2019. Pawar had submitted letters of support from 54 NCP MLAs to the Governor, claiming allegiance to Fadnavis.

NCP chief Sharad Pawar, however, denied having any role in the coup and claimed that the letters of support were not meant for Fadnavis. The senior Pawar reiterated the support of his MLAs for the Shiv Sena-NCP-Congress alliance and the matter was listed for hearing before the Supreme Court.

The Supreme Court, after hearing arguments from both the parties, ordered an immediate floor test. Hours before the scheduled floor test, Ajit Pawar announced his resignation as deputy CM, following which Devendra Fadnavis also resigned as the Chief Minister claiming that after Ajit Pawar’s withdrawal of support, the BJP did not have the required numbers to prove their majority in the assembly.

In a historic moment, Shiv Sena’s Uddhav Thackeray was sworn in as the 18th Chief Minister of Maharashtra on November 26, 2019. He became the first member of the Thackeray family to hold the top post in Maharashtra state government. It was also the first time that arch-rivals, Shiv Sena and the Congress came together to form the government in the state.

The NCP, Congress and the Shiv Sena formed the Maharashtra Vikas Aghadi (MVA) after the announcement of the Maharashtra Assembly Election Results 2019. The unexpected post-poll alliance came into being after Sena’s pre-poll alliance with the BJP collapsed following a disagreement over rotation of the CM post.  The BJP rejected Shiv Sena’s demand for sharing the CM post for two and a half years each.

The Maharashtra Vikas Aghadi formed the government in Maharashtra after weeks of negotiation on the common minimum programme. This is the first time that the Congress and the Shiv Sena have come together to form government in the state.

The Congress and NCP alliance have formed government in Maharashtra previously as well and NCP’s seven-time MLA Ajit Pawar had served as the Deputy CM on both the occasions. The 2019 Maharashtra assembly polls ended with the BJP winning 105 seats, Shiv Sena winning 56 seats, NCP winning 54 and the Congress winning 44 seats in the 288-member assembly.