The Shiv Sena-NCP-Congress alliance staked claim to form government in Maharashtra on November 26, 2019, after collapse of Devendra Fadnavis-led BJP government.

The Shiv Sena-NCP-Congress alliance staked claim to form government in Maharashtra on November 26, 2019 after Devendra Fadnavis-led BJP Government collapsed in the state. Fadnavis had announced his resignation after Deputy CM Ajit Pawar withdrew his support from the government.

Uddhav Thackeray was chosen as the common CM nominee of the ‘Maharashtra Vikas Aghadi’ during a joint meeting of the Shiv Sena-NCP-Congress. NCP chief Jayant Patil had put forward the resolution proposing Thackeray's name as the next Maharashtra CM and it was seconded by Congress Maharashtra chief Balasaheb Thorat.

Following the meeting, the leaders of the three parties met Maharashtra Governor Bhagat Singh Koshyari and staked claim to form the government. The leaders submitted letters of support of 166 MLAs. 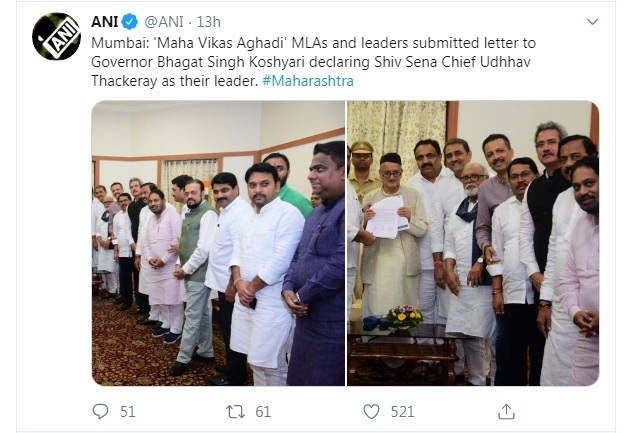 The Uddhav Thackeray-led government will have to submit letters showing majority support in the assembly by December 3, 2019. Uddhav Thackeray is scheduled to take oath as Maharashtra CM at 6:40pm on November 28, 2019 at Shivaji Park.

Also read: Who is Uddhav Thackeray? Know all about him

The newly appointed pro-tem speaker Kalidas Kolambkar called for a special session of the Maharashtra Legislative Assembly at 8 am on November 27 to administer the oath to all the 288 members of the assembly.

Babanrao Pachpute, Vijaykumar Gavit and Radhakrishna Vikhe Patil were announced as presiding officers for the swearing-in ceremony of the MLAs. Babanrao Pachpute and Vijayakumar Gavit were the first to the oath of office, following by caretaker CM Devendra Fadnavis.

Devendra Fadnavis resigned as the Chief Minister of Maharashtra on November 26, merely 80 hours after taking the oath for the second term.  Fadnavis’ resignation came after NCP’s Ajit Pawar withdrew his support from the government citing personal reasons.

The development broke out after the Supreme Court ruled for a floor test to happen before 5 pm on November 27 to prove which alliance claimed the majority.

Devendra Fadnavis, during a press briefing, revealed that his party had formed the government for the second time solely based on the support of the 54 NCP MLAs, as promised by Ajit Pawar. However, when Pawar withdrew support, the BJP did not have the numbers to prove the majority.

This prompted Fadnavis to resign from the post and it paved away for the Shiv Sena-NCP-Congress alliance to stake claim to form government in the state.

Devendra Fadnavis was sworn in for the second time on November 23 in an early morning ceremony with the alleged support of NCP. NCP’s legislative party leader Ajit Pawar was also sworn in deputy CM. However, the Maharashtra Vikas Aghadi objected to the government formation saying it did not have the support of the NCP MLAs and filed a petition against it at the Supreme Court.

The Shiv Sena had walked away from the NDA alliance on November 11, 2019 after the BJP refused to agree to its 50:50 arrangement.

According to the Shiv Sena, the BJP had agreed to the 50:50 formula before entering into a pre-election alliance with the party. However, after the election results were announced, the BJP refused to agree to the arrangement.

The BJP-Shiv Sena alliance had received an absolute majority in the Maharashtra Assembly Elections 2019. The BJP had won 105 seats, while the Shiv Sena had won 56 seats in the 288-member assembly.

On the other hand, the NCP had won 54 seats in the elections and its ally the Congress had won 44 seats.