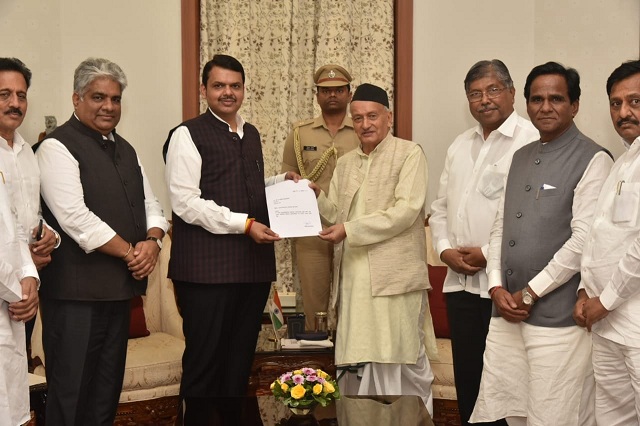 During his media address, Fadvanis reiterated that the BJP had emerged as the single largest party with 105 seats in the Maharashtra assembly elections 2019, while Shiv Sena was the second largest party with just 56 seats. He said that though the BJP had contested with Shiv Sena, the mandate was primarily for BJP, as it had won 70 percent of the total seats it had contested.

Fadnavis also stressed that the BJP had not made any promise regarding rotational CM post to the Shiv Sena. He blamed the Sena for going back on its promises and ideals and attempting to tie up with the Congress and NCP. 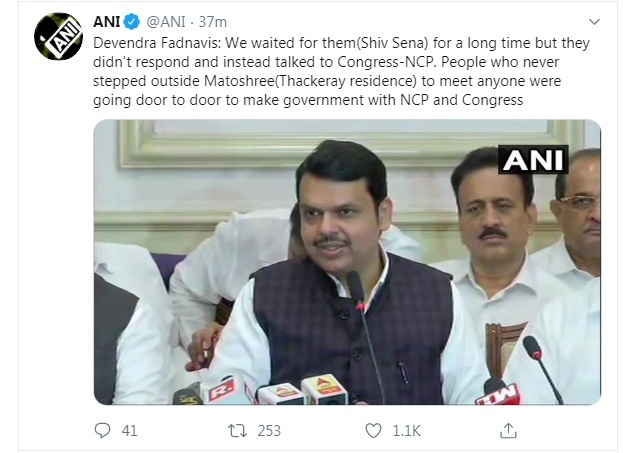 He further said that Ajit Pawar had offered his support to form government in the state when the NCP-Shiv Sena-Congress alliance could not come to a conclusion. Believing that they had the support of all 54 NCP MLA's, the BJP had staked claim to form the government.

However, when the Supreme Court ordered an immediate floor test, Ajit Pawar stated that he could not continue with the present government due to personal reasons and requested Fadnavis to let him resign from his position. Following Ajit Pawar's resignation, Fadnavis said that the BJP does not have the numbers and it does not believe in horsetrading. Fadnavis confirmed that the BJP has decided to sit in the opposition and be the voice of the people in the state. 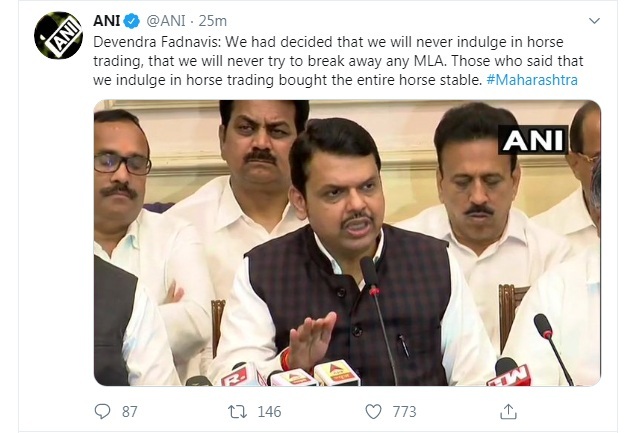 This brings an end to the political impasse caused by the legal battle between the Sena-NCP-Congress combine and the Devendra Fadnavis-led BJP and NCP’s Ajit Pawar. The Shiv Sena, Nationalist Congress Party and Congress had filed a joint petition against Maharashtra Governor Bhagat Singh Koshyari's decision of inviting Devendra Fadnavis to form government in Maharashtra with the alleged support of the NCP, as claimed by NCP's legislative party leader Ajit Pawar.

The Supreme Court had earlier today ordered that the Maharashtra floor test must be conducted by 5 pm on November 27, 2019.  The apex court had said that the floor test should be conducted through open ballot and the entire proceedings will be recorded and telecasted live.

Justice NV Ramana, while reading out the order, stated that constitutional morality needs to be promoted while finding a balance to opposing claims. He said that the issues need to be addressed at the interim stage itself. The top court further stated that in such a situation if the floor test is delayed, the possibility of horse trading increases. So, an immediate floor test might prove to be the most effective mechanism.

The case was heard by a special bench of the Supreme Court headed by Justice NV Ramana and comprising Justices Ashok Bhushan and Sanjiv Khanna on November 25, 2019.

1. The Maharashtra floor test should be live and it should be videographed.

2. The floor test to be conducted through open ballot.

3. The pro tem speaker should be appointed immediately.

4. The floor test must be conducted before 5 pm on November 27.

5. The floor test should not be a secret ballot.

6.  All elected members shall take oath on November 27.

How is pro tem speaker appointed?

The senior-most member of the assembly must be appointed as the pro tem speaker. The final decision rests with the Maharashtra Governor, who has the responsibility to appoint the pro-tem speaker.

In the special hearing held on November 25, 2019, the counsel for the Maharashtra BJP and the state and the central government defended the Maharashtra Governor’s decision of inviting the BJP to form government with the support of NCP’s Ajit Pawar stating that the Governor had based his decision on the letters of support submitted to him.

Solicitor General Tushar Mehta argued that the Governor does not have to do a review of the submitted documents. Abhishek Manu Singhvi, appearing on behalf of NCP and Congress, argued that nowhere did the letter say that the 54 NCP MLAs support BJP.