NASA and Chandrayaan-2: India was hoping to become the fourth such country after the US, China, and Russia to make a successful landing on the south pole of the moon. 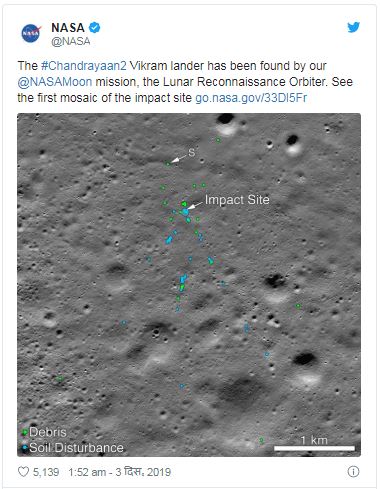 Also Read | Chandrayaan-3: ISRO’s another bid to land on Moon

• NASA said in a statement that it had released a mosaic image of the site on September 26 and invited people to search for signs of the lander.
• After that, a person named Shanmuga Subramanian approached the LRO project with positive identification of the wreck.
• The debris, located approximately 750 meters northwest of the main crash site was identified by  Shanmuga Subramanian.
• He previously had discovered the mosaic (1.3 m pixels, 84 ° incidence angle) in November.

As per the reports, Shanmuga Subramanian reviewed Vikram Lander's last known velocity and position; he changed the location of debris as per the previous images are shown. A white dot appeared just a short distance from where Chandrayaan-2's hard landing was being anticipated. He said that in some earlier photographs this point was not clear. It is quite possible that the Lander may have penetrated the surface of the moon.

Earlier, Indian Space Research Organization chief K Sivan said on September 9 that ISRO had found photographs of Vikram Lander on the moon. After 47 days of travel, on September 07, when Chandramayan-2's Vikram lander was just 2.1 km away from the lunar surface, his contact with ISRO was lost. Then it was announced that Vikram had hard landing on the lunar surface.

What was the objective of Chandrayaan-2?

It took 11 years to send Chandrayaan-2 on the Moon. Vikram Lander was primarily to analyze the rocks and craters on the lunar surface. The main objective of ISRO was to find out water on the lunar surface with the help of Pragyan Rover. India would have become the first country in the world whose spacecraft would have landed close to the south pole of the moon if Vikram Lander had a soft landing. India could also become the fourth country in the world to land on the moon after the USA, Russia, and China.