The ozone hole that forms over Antarctica every year in September was found to be the smallest this year since 1988. This was revealed by the NASA satellite measurements from 2017. 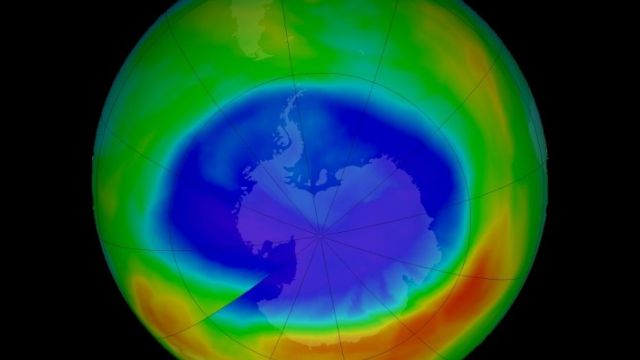 The ozone hole that forms over Antarctica every year in September was found to be the smallest this year since 1988.

This was revealed by the NASA satellite measurements from 2017. According to NASA scientists, the hole in the ozone layer reached its peak extent on September 11, covering an area about two and a half times the size of the US - and then it declined through the remaining part of September.

The ground- and balloon-based measurements from the National Oceanic and Atmospheric Administration (NOAA) also showed the least amount of ozone depletion above the continent during the peak of the ozone depletion cycle since 1988.

• The NOAA and NASA collaborate to monitor the growth and recovery of the ozone hole every year.

• The smaller ozone hole this year was strongly influenced by an unstable and warmer Antarctic vortex - the stratospheric low pressure system that rotates clockwise in the atmosphere above Antarctica.

• The formation and persistence of these clouds are the first steps that lead to the chlorine- and bromine- catalysed reactions that destroy the ozone.

• These Antarctic conditions resemble those found in the Arctic, where ozone depletion is much less severe.

According to scientists, the smaller ozone hole extent in 2016 and 2017 is due to natural variability and not a signal of rapid healing.