Perseverance rover has become NASA's fifth rover to touch down on Mars after Sojourner, twin rovers Spirit and Opportunity and Curiosity. 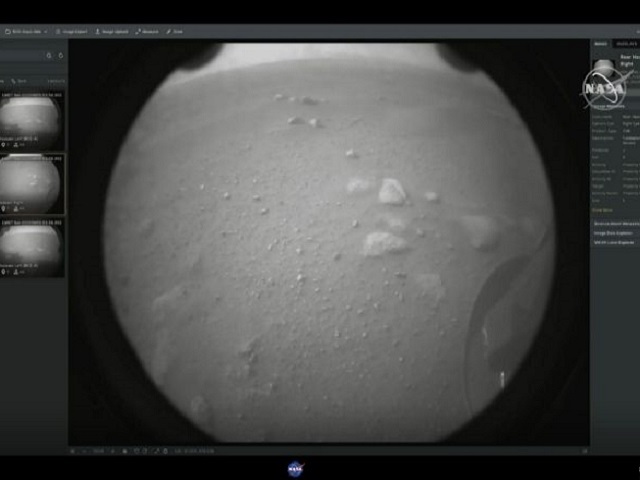 The National Aeronautics and Space Administration's (NASA) Perseverance rover landed successfully at Mars' Jezero Crater on February 18, 2021 after surviving a blazing seven-minute plunge through the Martian atmosphere, nearly seven months after its takeoff.

Perseverance rover has become NASA's fifth rover to touch down on Mars after Sojourner, twin rovers Spirit and Opportunity and Curiosity.

I’m safe on Mars. Perseverance will get you anywhere.

Perseverance will spend the coming years searching for signs of ancient microbial life on Mars in a historic mission. It will be the first mission that will bring back rock samples from Mars to Earth, paving the way for future manned missions.

After 203 days and 300 million miles, our @NASAPersevere landed on Mars at 3:55 p.m. EST on Feb. 18. After spending some time checking out its systems, it'll be rolling across the Red Planet, looking for signs of ancient Martian life. https://t.co/3Tr7doXdJS pic.twitter.com/FhwoXz5l4n

US President Joe Biden tweeted congratulating NASA and everyone whose hard work made Perseverance’s historic landing possible. He said that the historic feat proved once again that with the power of science and American ingenuity, nothing is beyond the realm of possibility.

Thank you, Mr. President. My team persevered through incredible adversity to get me here, and now I’m ready to get to work. https://t.co/L5siszeb4i

Vice President Kamala Harris also tweeted congratulating NASA and all its partners on their successful mission. She said that the historic landing embodies the US' spirit of perseverance—building on past accomplishments and paving the way for future missions.

Thank you, @VP Harris! I’ve got ambitious goals, and a long to-do list. Looking forward to many more accomplishments to come. https://t.co/4uafckTeqm

And another look behind me. Welcome to Jezero Crater. #CountdownToMars pic.twitter.com/dbU3dhm6VZ

When was NASA's Perseverance rover launched?

What is the main mission objective of the Perseverance rover?

•Perseverance's main mission objective will be to search for signs of ancient microbial life and carefully collect selected rock and regolith (broken rock and dust) samples for a future return to Earth.

•The rover will characterise Mars' geology and climate and pave the way for human exploration beyond the Moon.

•Perseverance is carrying along a technology experiment - the Ingenuity Mars Helicopter - which will attempt the first powered and controlled flight on another planet.

Perseverance is NASA's fifth Mars rover and overall, it is the space agency's ninth Mars landing. It is also the largest, most advanced rover that NASA has sent to another world. It touched down on Mars after a 203-day journey traversing 472 million kilometers.