The research team will led by McClure and co-principal investigators Adwin Boogert and Harold Linnartz and will target the Chamaeleon Complex, a star-forming region visible in the Southern Sky. 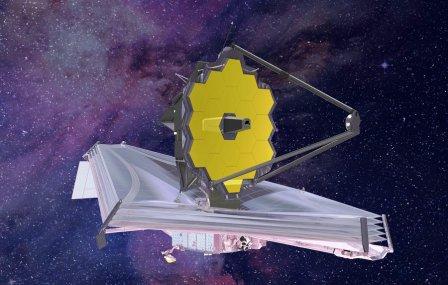 NASA’s James Webb Space Telescope will examine the molecular clouds, the cosmic reservoirs, to know the origin and evolution of water and other major cosmic objects for habitable planets. This was announced by the National Aeronautics and Space Administration (NASA) on March 9, 2018.

Molecular Cloud and its Processes

• A molecular cloud is an interstellar cloud comprised of dust, gas and a variety of molecules such as molecular hydrogen (H2) and carbon-containing organics.

• These clouds hold most of the water in the universe and serve as the nurseries for newborn stars and their planets.

• All these molecules stick to the surface of dust grains, accumulating icy layers over millions of years.

• This finally leads to the vast collection of snowflakes that are cleared up by small planets, delivering materials needed for life.

• Researchers will use a variety of Webb's instrument modes and capabilities to examine a nearby star-forming region to determine which ices are present where.

• The project will make use of Webb's High-Resolution Spectrographs to get the most perceptive and accurate observations at wavelengths that specifically measure ices.

• Webb's spectrographs NIRSpec and MIRI will provide five times better accuracy than any other space telescope at near and mid-infrared wavelengths.

• The Research team plans to target the Chamaeleon Complex, a star-forming region visible in the southern sky. It is located about 500 light-years from Earth and contains several hundred protostars, the oldest of which are about 1 million years old.

• The team will use Webb's Infrared Detectors to observe stars behind the molecular cloud. As the light will pass through the cloud from background stars, ices in the cloud will absorb some of the light.

• By observing these background stars, astronomers can map ices within the cloud's entire area and locate where different ices form.

• The team will also study individual Protostars to learn how ultraviolet light from these stars promotes the creation of more complex molecules.

• Researchers also will examine the birthplaces of planets and Protoplanetary Disks, the rotating disks of gas and dust that surround newly formed stars.

• By examining the interstellar water, researchers could understand the chemical complexity of these snowflakes in the molecular cloud, and how they evolve during the formation of a star.