Nobel Prize in Medicine 2019 has been jointly awarded to William G. Kaelin Jr., Sir Peter J. Ratcliffe and Gregg L. Semenza for their work in discovering how cells adapt to varying oxygen levels. The announcement was made by the Nobel Committee at Karolinska Institutet in Stockholm on October 7, 2019.

The three researchers- William G. Kaelin Jr., Sir Peter J. Ratcliffe and Gregg L. Semenza had discovered how the cells can sense and adapt to changing oxygen availability. They had identified molecular machinery that regulates the activity of genes in response to varying oxygen levels.

The discoveries revealed the mechanism for one of life’s most essential adaptive processes. They established the foundation of understanding how oxygen levels affect cellular metabolism and physiological function.

Though the fundamental importance of oxygen has been relayed for centuries, how cells adapt to changes in levels of oxygen has remained unknown. Oxygen is essential to convert food into energy.

Why is the discovery important?

Understanding how cells sense and adapt to oxygen availability is central to curing a large number of diseases. Hence, the discoveries made by the 2019 Nobel Prize Medicine winners have fundamental importance for physiology and also pave the way for discovering new strategies to fight diseases such as anemia and cancer. 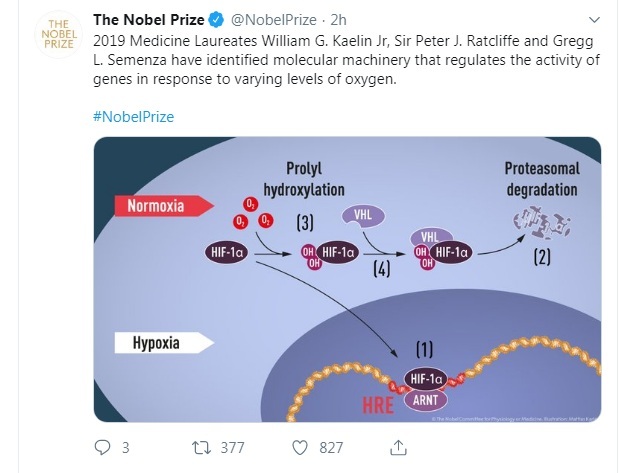 1. William G Kaelin Jr: The 2019 Nobel laureate is a professor of medicine at Harvard University and the Dana-Farber Cancer Institute. He has been an investigator at the Howard Hughes Medical Institute, based in Maryland, since 1998.

3. Gregg L Semenza: The Nobel laureate became a full professor at Johns Hopkins University in 1999. In 2003, he had appointed as the director of the Vascular Research Program at the Johns Hopkins Institute for Cell Engineering.

Oxygen (O2) makes up about one-fifth of Earth’s atmosphere. Oxygen is essential for animal life, it is used by the mitochondria present in virtually all animal cells to convert food into useful energy. During evolution, mechanisms were developed to ensure there was a sufficient supply of oxygen to tissues and cells. The carotid body, which is adjacent to large blood vessels on the sides of the neck, contains special cells that sense the oxygen levels in the blood.

The Nobel Prize in Medicine 2018 was jointly awarded to James P. Allison from the US and Japan’s Tasuku Honjo for their work on immunotherapy, using the body’s immune system to attack cancer.