PM Modi will attend G7 Summit in France and visit the United Arab Emirates and Bahrain for bilateral meetings. 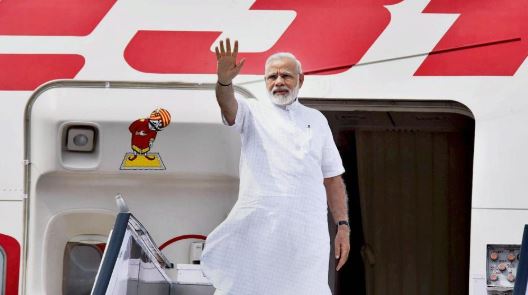 Prime Minister Narendra Modi will visit France, UAE and Bahrain between August 22 and 26, 2019. PM Modi will attend G7 Summit in France and visit the United Arab Emirates and Bahrain for bilateral meetings. These meetings will focus on issues ranging from defence and security cooperation to energy security and the Indo-Pacific.

India is not a member state of G7 but has been extended a special invitation. French President Emmanuel Macron and PM Modi will hold a one on one meeting within hours of landing. This will be his first bilateral visit to a European nation in his second term.

• PM Narendra Modi and French President Emmanuel Macron will hold a one on one meeting followed by delegation-level talks and the signing of agreements.
• The Next Day French Prime Minister Edouard Philippe and PM Modi will meet. PM Modi will also address an event of the Indian community at the UNESCO headquarters in Paris.
• He will inaugurate a memorial for Indian victims of two Air India flight tragic air crashes of 1950 and 1966.

• PM Modi will visit the United Arab Emirates (UAE) after France. Crown Prince of Abu Dhabi Sheikh Mohamed Bin Zayed Al Nahyan and PM Modi will hold delegation-level talks.
• He will also receive the Order of Zayed, the highest civil decoration of the UAE. This award is given in recognition for giving a big boost to the bilateral strategic relations.
• Commemorative stamps on the occasion of Mahatma Gandhi's 150th birth anniversary celebrations will be launched in Abu Dhabi.

Also Read | Aadhaar-social media linking: All you need to know

After Bahrain, PM Modi will return to France on August 25 for the G7 Summit. The G7 Summit will happen on August 25-26 in Biarritz, France. PM Modi will demonstrate JAM- Jan-Dhan, Aadhar and Mobile in a Digital Transformation session. Apart from several bilateral and pull aside meetings, PM Modi will also speak to the US President Donald Trump and British Prime Minister Boris Johnson over the phone.