Pollution in Delhi : A Chronic Problem

The Indian national capital Dellhi has been witnessing a serious pollution problems since many years. This problem has been incurable since many years. This year too, a lot of smog which is many times more than danger level, is dissaminated all over Delhi.So, in order to understand the actual reasons and solutions of this chronic problem, we have elaborated the whole phenomenon in detail. 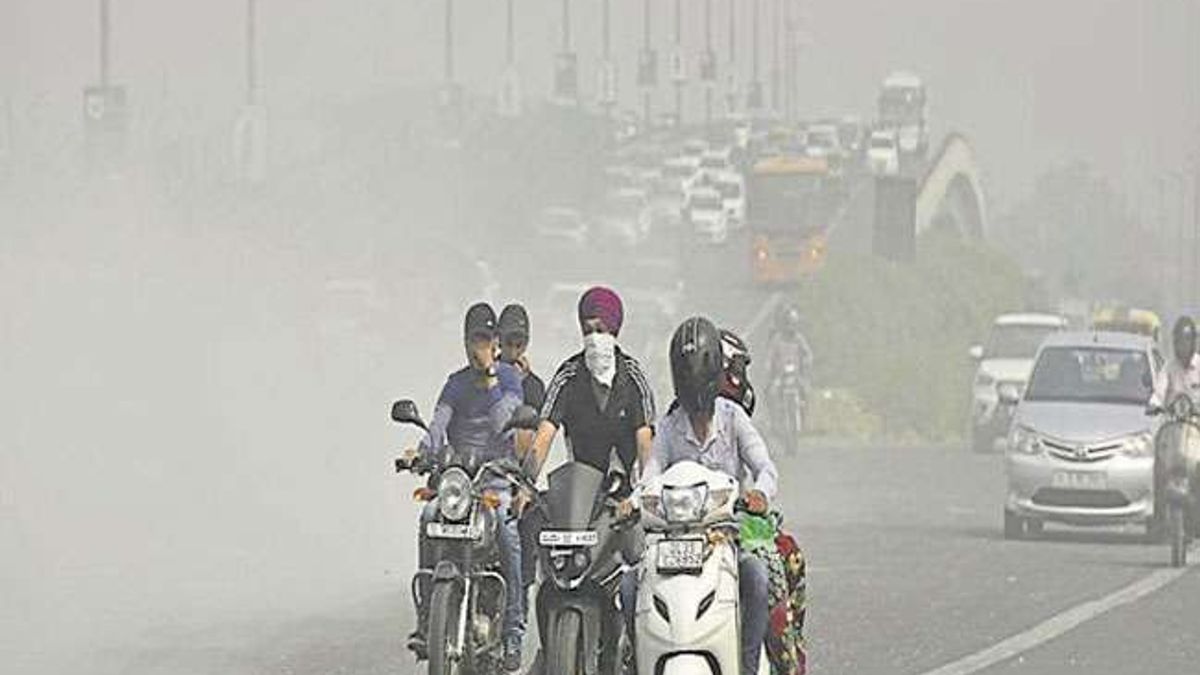 Pollution in Delhi : A Chronic Problem

Delhi (or the National Capital Territory of Delhi), is an union territory which is administrated by the central and state governments. According to 2011 census of India it accommodates nearly 167.5 lakh people. The air pollution has been a chronic problem of Delhi.The condition has deteriorated so badly that Government decided to shut down the schools because of the fear of respiratory diseases. The Delhi government has announced a slew of measure to cop up the crisis. The immediate measures which were taken by the government includes the Ban on construction activity and closing of the Badarpur power plant.

Air pollution in Delhi NCR (National Capital Region) is caused by various reasons. The air pollution comprises of mix of pollution which ranges from human activities like vehicle emissions, industry, and residential fuel burning to natural sources like sea salt and dust. In winters cool air triggers inversions which stagnant the air and keep pollution close to the ground. This kind of meteorological conditions affect the heavy volume of particulate matter. Delhi’s location falls in the way of Air flow patterns from Afghanistan and Pakistan which carry emissions from both urbanized and Rural areas of Punjab and Hariyana.  Dust storms which are seen in pre-monsoon period also cause air pollution.

Municipal solid waste generated in The NCR is about 10,000 tons per day. And much of this solid waste is eventually burned which adds particulate pollution to the air .The rapid urbanization which is taking place in NCR increases air pollution through massive constructions. A high numbers of Vehicles play an important role to cause air pollution in Delhi. According to the Department of Transport, Government of National Capital Territory of Delhi, there are around 9 million registered vehicles are in Delhi which is set to increase more with the time. This  segment almost contributes  to two-thirds of the air pollution, but  there has been a palpable decline compared to the 1995-1996 levels. The PM10 parameter is generally used to figure out the quality of air. The PM10 includes particles with a diameter of 10 μm or less (0.0004 inches). These small particles are harmful enough for health because of their ability to access the lower regions of the respiratory organs. The Air Quality Guideline issued by the World Health Organization, states that the annual average concentration recommended for PM10 is 20 μg/m3. The concentration beyond  this limit is considered harmful  for cardiopulmonary health effects. Major ailments caused to human health from exposure to PM10 entail effects on respiratory and breathing systems, cancer and premature death and damage to lung tissue.  This particulate matter is more lethal for children and people with chronic lung disease, influenza or asthma and Elderly persons. World Health Organization in September 2011 released The urban air database  which reported that Delhi has crossed the maximum PM10 limit by almost 10-times at 198 μg/m3, trailing in the third position after Ludhiana and Kanpur.

The data shows that PM 2.5 level in Delhi after this Diwali was far more than danger level. The PM 2.5 levels were 428µg/m³—nearly six times the safe limit. The particulate matter 2.5 (PM2.5), refers to tiny particles in the air that are two and one half microns or less in width .A micron is a unit of measurement for distance and it is used to measure particulate matters like PM2.5.  And an inch equals to 25,000 microns. The widths of the larger particles in the PM2.5 size range would be about thirty times smaller than that of a human hair. Particles in the PM2.5 size range easily travel deeply into the respiratory tract, reaching the lungs.  Human’s exposure to fine particles can induce short-term health effects such as  Nose, eye, throat and lung irritation, sneezing, coughing, shortness of breath, runny nose and shortness of breath. Exposure to PM2.5 particles can also worsen medical conditions such as asthma and heart disease and it can also affect lung function of the body. Scientific studies have shown that increase in daily PM2.5 exposure results in increased respiratory and cardiovascular hospital admissions, emergency department visits and deaths. Studies also show that long term exposure to PM2.5 may be associated  with increased mortality from lung cancer and heart disease , increased rates of chronic bronchitis, and reduced lung function. PM 2.5 is particularly sensitive to people with breathing and heart problems, the elderly and children. The Ministry of Environment and Forests at the Centre and the Department of Environment of the Government of National Capital Territory of Delhi are set up for protecting the environment in Delhi. The Central Pollution Control Board was set up in 1974 under the Water Act. It is the main watchdog for implementing the functions stated in the environmental acts, application of National Air Quality Monitoring Programme and other related activities.

At state level, The Delhi Pollution Control Board is the body responsible for environment protection. In response to public litigations, the judiciary has taken strong steps against environmental deterioration in Delhi. One of the earliest stand taken by judiciary was the verdict stated by the Supreme Court of India to deal with the chronic problem of vehicular pollution in Delhi in 1985. Subsequently, the orders of shutting down of harmful and noxious  industries, brick kilns  and hot-mix plants operating in Delhi.

The Air Ambience Fund was formed from diesel sales and stringent emission norms were set  for industries and thermal power stations.  The campaigns about Environmental awareness are done at regular intervals. The Delhi Pollution Control Board does monthly Ambient Air Quality Monitoring at 40 different locations in Delhi, and takes corrective measures wherever necessary.

Delhi saw its first Industrial Policy in 1982. The second Industrial policy (2010–2021) was passed by the Department of Industries, Government of Delhi. This policy envisions higher industrial development with clean and non-polluting industries. In the policy documents details of steps to be undertaken in this direction have been described. There are many other organizations that collaborate synergistically with the government to reduce air pollution in Delhi. These organizations are The Energy and Resources Institute, the Centre for Science and Environment and the Indian Association for Air Pollution Control. Some government agencies like Factories Inspectorate are also actively involved in the control of pollution. Research and academic institutions include National Environmental Engineering Research Institute, Council of Scientific and Industrial Research institutions , Indian Institute of Technology, Indian Agricultural Research Institute and various other academic institutions  are also involved in the control of pollution .

The center has taken a move to provide real time data on air in India’s bigger cities. Prime Minister Narendra Modi launched The National Air Quality Index which is under work process. This will help pollution control agencies to take more corrective measures to control the pollutants. The WHO’s recommendation about particulate matter is that an average level of 10 micrograms per cubic meter  and an interim target of 40 mcg/m can be tolerable. But as its already mentioned the PM level in Delhi goes way beyond from the WHO recommendation.

The global experience shows that the escalation in pollutions levels accompany boosted economic activity but an informed and insightful policy response reduces the progression of pollution. The challenge in front of central government is to come out with such laws which would make wealthy polluters pay and spread green alternatives with attractive incentives.

The Prime Minister of India has advocated about change in life style so that we can move in the direction of clean India but a supportive framework is very essential for achieving it.

The National Green Tribunal has ordered that diesel vehicles over 10 years old not ply on Delhi roads. This is a positive measure, but those affected should get a reasonable opportunity to make alternative arrangements. The government has also failed to grasp the potential of bicycles as a clean mobility solution, and cities are hostile to their users. Coal burning for power generation can be reduced if rooftop solar power is promoted through a national scheme. U.S. cities are leasing out to homes solar panels. It is such smart solutions that can dramatically improve the air in urban India, without affecting the high quality of life that citizens aspire for

The Government of National Capital Territory of Delhi has taken several steps to reduce the level of air pollution in the region during the last 10 years. But after Diwali , the dense smog with high level of particulate matter revealed the  loopholes in the efforts made by the government. Still many things are needed to be done to curb the level of air pollution. The already existing measures are needed to be strengthened and expanded to a larger scale. The efforts made by the government alone are not enough. The active participation of the community is essential in order to make a concrete effect in the reduction of pollution. The use of public transport is a must be promoted. The maximum utilization of Metro train should be encouraged.  The frequency in checking of Pollution Under Control Certificates needs to be undertaken by the civic authorities .People  are required to be educated to switch-off their vehicles while waiting at traffic intersections. The ever-increasing influx of migrants  in Delhi can be maintained by creating job opportunities in the peripheral and suburban areas. This will help in causing population congestion in Delhi.  As it is an obvious fact that health is an all-pervasive subject ranging from not only health department but all those who are involved in human development. Even in the past many great scholars from Charaka to Hippocrates have emphasized the importance of environment in  human health. Therefore, everybody who plays any role in affecting the environment in any way needs to sincerely contribute to safeguard people's health by controlling all those factors which affect it.