Qatar has announced that it would be introducing a minimum wage for workers. The country has been under global scrutiny over its alleged ill-treatment of migrant labourers. 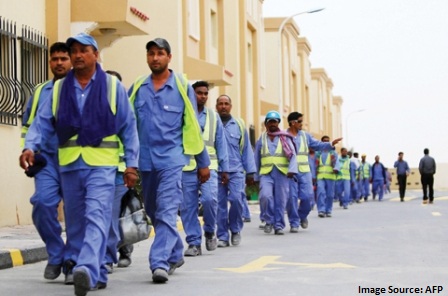 Qatar on 25 October 2017 announced that it would be introducing a minimum wage for workers. The country has been under global scrutiny over its alleged ill-treatment of migrant labourers.

The gulf country has also signed bilateral accords with 36 countries from which it draws most of its two-million-strong foreign workforce, in order to provide legal protection to the workers.

The information for the same was shared by the country’s Minister of administrative development, labour and social affairs - Issa Saad al-Jafali al-Nuaimid, during a meeting with foreign diplomats.

According to the Minister, the minimum wage initiative would aim to meet the necessary needs of the workers, to enable them to live at an appropriate humanitarian level.

However, no further details were shared on when the minimum wage would be introduced or what level.

The announcements came on the eve of an International Labour Organisation (ILO) meeting that could see the launch of a formal investigation by the UN agency into Qatar's treatment of migrant workers.The ILO’s meeting is scheduled to start on 26 October in Geneva and it would be running till 9 November 2017.

• According to many unions and Human Rights groups, workers and labourers have been lured to work in the oil-rich nation for considerably less money that what was promised to them earlier.

• There has also been widespread criticism on the workers not getting paid their dues on time.

• In February 2015, Qatar introduced the Wage Protection System, a major reform that was designed to ensure workers receive their salaries electronically, either within a fortnight or monthly.