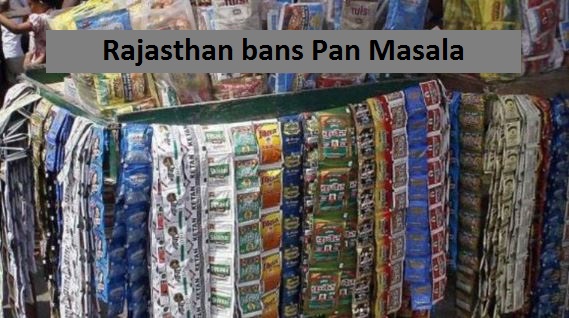 The Rajasthan Government banned certain categories of Pan Masala and flavoured Tobacco products made of magnesium, carbonate, nicotine and mineral oil. Rajasthan is the third state to impose this ban after Maharashtra and Bihar. The medical department of Rajasthan will start taking samples of these products, and after investigation, if products found these substances will be banned.

The government has banned these items under the Food Security Act. Every year, thousands of people in Rajasthan lose their lives due to cancer and consumption of tobacco. Now any kind of sale, production or storage of these products will not be allowed in the Rajasthan.

• Earlier, Rajasthan had banned Tobacco based Gutkha. Then to defy this ban, Pan masala companies started selling tobacco and pan masala separately.
• Hence, the ban was not successful in the State. Now, all the products containing pan masala, gutkha, tobacco, carbonate and nicotine will be completely banned.
• Production, storage, distribution, transportation, demonstration and sale will be banned under the Food Safety Act.
• The government believes that this decision will control the number of cancer patients in the state.
• The state government had already banned e-cigarettes and hookah-bars.

According to the cancer society of India, chewing tobacco is the major reason for mouth cancer in India. AS per the research, people who regularly use or chew tobacco products have more risk of cancer as tobacco and chemicals can damage natural DNA. Tobacco can cause various types of cancer like mouth, lung, throat, bladder, kidney, stomach, colon and many other organs of the body can be affected.