Five new species of fish have been discovered from different districts of Arunachal Pradesh.

Five new species of fish have been discovered from different districts of Arunachal Pradesh. The discovery was made by a fisheries and aquatic ecology research team from the zoology department of Rajiv Gandhi University (RGU). The research team was headed by Professor DN Das.

The RGU research team published the details of the discovery in various International journals. According to Prof DN Das, the head of the research team, the majority of remote water bodies in the state are still not easily accessible to researchers due to dense rainforests, steep terrains and communication problem. He, however, said that the research team was confident that systematic exploration may result in more discoveries of new Ichthyo species from the state in the future.

1. Mystus Prabini: The fish species was discovered in Sinkin and the Dibang rivers in Lower Dibang Valley district.

2. Exostoma Kottelati: The species was discovered in the Ranga River in Lower Subansiri district.

3. Creteuchiloglanis Tawangensis: The species was discovered in the Tawangchu river in Tawang district of the Arunachal Pradesh.

4. Garra Ranganensis: The species was discovered in the Ranga River.

5. Physoschistura Harkishorei: The species was discovered in the Dibang and the Lohit rivers in Lower Dibang Valley district. 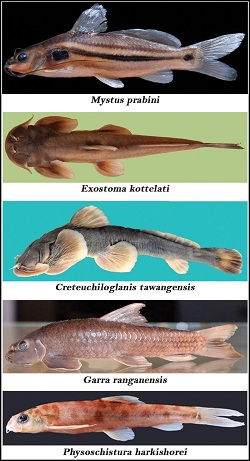