Indian batsman Rohit Sharma created history on 13 December by becoming the first batsman in the history of cricket to score three double centuries in one-day internationals (ODI). The ace batsman achieved the feat during India’s second ODI against Sri Lanka in Mohali, Punjab.

The ace batsman achieved the feat during India’s second ODI against Sri Lanka in Mohali, Punjab, in which India put up a mammoth score of 394/4 in 50 overs.

The batsman, who opened the innings alongside Shikhar Dhawan, remained unbeaten till the end. His individual score card read 208 not out in mere 153 balls, which was studded with 13 fours and 12 sixes.

This is Sharma’s second double century in the 50-overs' format against Sri Lanka. The last one was at the Eden Gardens in Kolkata in November 2014 when he played a knock of 264, the highest-ever score by a batsman in an ODI innings.

His first-ever double century in ODI was against Australia in November 2013 at the M Chinnaswamy Stadium in Bengaluru when he made 209 runs.

Sharma’s effort has also made him the first-ever captain to score an ODI double century. Interestingly, it is his first 100 plus score as the skipper of the ODI team. He is temporarily handling the job while Virat Kohli is on a break.

Scroll down to see who said what on Sharma's fabulous feat: 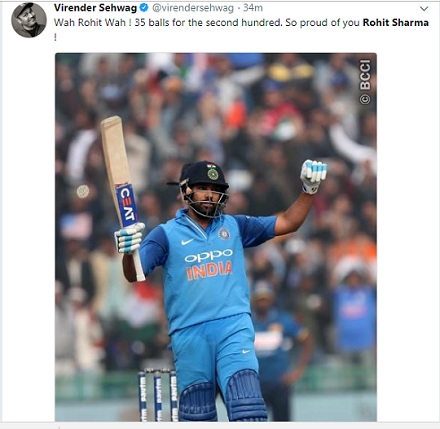 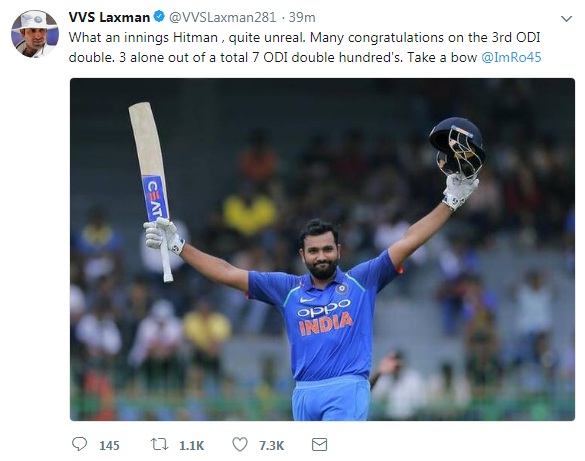