Shimla Agreement: What is Shimla agreement and how is it relevant to Trump’s Kashmir mediation claim?

Shimla Agreement: Donald Trump’s Kashmir claim turned into a huge controversy, as it violates the 1972 Shimla Agreement, signed between India and Pakistan. 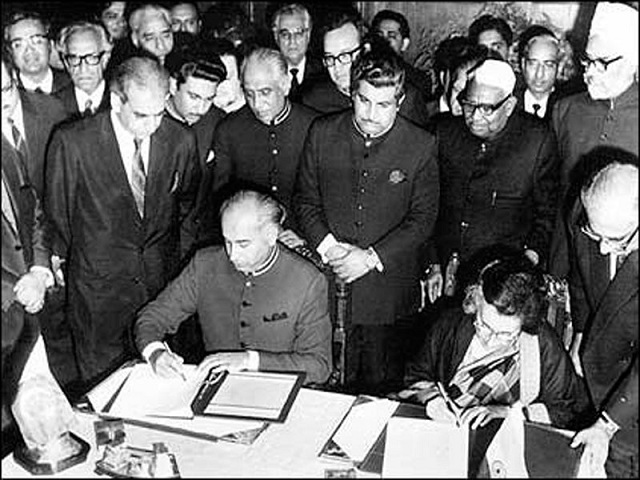 Shimla Agreement: What is Shimla agreement and how is it relevant to Trump’s Kashmir mediation claim

Shimla Agreement: Donald Trump in a recent statement claimed that PM Modi had asked him to be the mediator in the Kashmir dispute between India and Pakistan. India outrightly rejected Trump’s claims saying that no such request was made by the Prime Minister. Trump’s Kashmir claim has, however, turned into a huge controversy, as it violates the 1972 Shimla Agreement.

The United States has always previously maintained that the Kashmir issue must be solved bilaterally by India and Pakistan. India has also strictly maintained that its Kashmir dispute with Pakistan is a bilateral one and no third party has any role in it. Hence, Trump’s recent statement marks a major shift from the US’s earlier stand on the issue.

Shimla Agreement: What is it?

The Shimla agreement was signed by the then Indian Prime Minister Indira Gandhi and Pakistan President Zulfikar Ali Bhutto on July 2, 1972, after the 1971 India-Pakistan war, which liberated East Pakistan and led to the creation of Bangladesh.

The Shimla agreement was a comprehensive blueprint that aimed to enable good neighbourly relations between India and Pakistan. Under it, both India and Pakistan decided to give up past conflict and focus on establishing a durable friendship, peace and cooperation between them.

Principles of the Shimla Agreement are as follows:

- Mutual commitment to the peaceful resolution of all issues through direct bilateral approaches.

- Build the foundation of a cooperative relationship with a focus on people-to-people contacts.

- Uphold the inviolability of Line of Control in Jammu and Kashmir.

1. India and Pakistan resolved to put an end to the conflict and confrontation that had strained their relations in the past and work to promote a friendly and harmonious relationship to establish durable peace in the subcontinent.

2. Both India and Pakistan agreed that the relations between the two will be governed by the principles of the United Nations charter.

3. The two countries resolved to solve their differences by peaceful means, through bilateral means or other means mutually agreed upon by them.

4. Both India and Pakistan agreed to respect the line of control in Jammu and Kashmir without any prejudice to the recognized position of either side. They also agreed that neither will seek to alter it unilaterally, irrespective of mutual differences and legal interpretations.

5. Further, the two nations also agreed to refrain from the use of threat or force in violation of this Line.

The Shimla agreement was ratified by both India and Pakistan in their respective constitutional procedures.