The World Bank on 31 October 2017 released the Doing Business (DB) Report 2018 titled as 'Doing Business 2018: Reforming to Create Jobs'. As per the report, India ranked 100 among 190 countries, assessed by the Doing Business Team. While, India and Italy on 30 October 2017 signed six Memorandum of Understanding (MoU) to boost cooperation in various important sectors including energy and trade and railways. 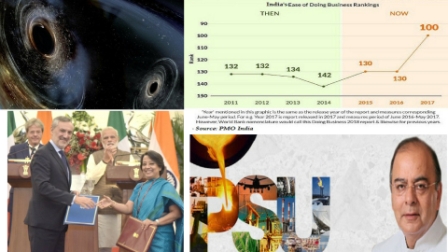 India jumped over 30 ranks this year to attain 100th spot in the ease of doing business list. It was ranked at 130th position in the 2017 Doing Business Report.

As per the report, Brunei Darussalam, Thailand, Malawi, Kosovo, India, Uzbekistan, Zambia, Nigeria,  Djibouti and El Salvador were the most improved economies in 2016/17.

The study points to a prime location for scientists hunting for the sources of gravitational waves. The findings will be published in the upcoming issue of the Astrophysical Journal Letters.

Scientist Sukanya Chakrabarti, who is an Assistant Professor at Rochester Institute of Technology, observes that conditions favourable for black-hole mergers exist in the outer gas disks of big spiral galaxies.

India and Italy on 30 October 2017 signed six Memorandum of Understanding (MoU) to boost cooperation in various important sectors including energy and trade and railways.

A joint statement issued after the meeting read that both the Prime Ministers called upon all the countries to work towards rooting out terrorist safe havens, their infrastructure and networks and halting cross-border movement of terrorists.

The Supreme Court, while hearing the case of inhuman conditions of prisoners in the country, said that jail officials must be made part of the undertrial review committees (UTRCs) in the states and a standard operating procedure in this regard should be put in place.

The court directed that jail superintendents should be a part of the UTRC (undertrial review committees) meetings, and therefore prison authorities must be involved in the process.

The Supreme Court ruled this while hearing the case of inhuman conditions prevailing in 1,382 prisons across the country.

The bench, however, expected that the state governments and the authorities would take care the issues, by keeping in mind that it pertains to human rights which must be given priority.

The Union Government on 31 October 2017 constituted a ministerial committee headed by Finance Minister Arun Jaitley to oversee merger proposals of 21 state-owned PSU banks.  The other members of the committee include Railways and Coal Minister Piyush Goyal and Defence Minister Nirmala Sitharaman.

Besides this, the Union Government is working on banking reforms and constituted an Alternative Mechanism for Public Sector Banks. The mechanism will oversee the proposals coming from boards of PSBs for consolidation.