For the first time, a Mars exploration project will be able to take a global picture of the Martian atmosphere. 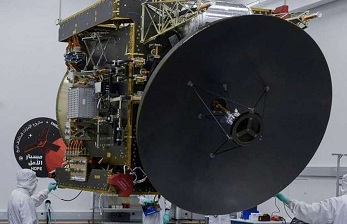 The UAE Space Agency and Mohammed bin Rashid Space Centre (MBRSC) have announced 85 percent completion of the gulf nation’s ‘Hope Probe’ project. The probe is an ambitious dream project of the UAE to send a mission to Mars.

The two space organizations confirmed in a joint statement that most of the main parts of the project have been completed and are currently undergoing intensive testing to ensure every aspect of the Probe is ready for activation a few months before the launch date.

The probe is scheduled to be launched in July 2020. With its successful launch, UAE hopes to become the first Arabic and Islamic country to make the Mars Mission dream a reality.

• The probe has entered an intensive testing phase to ensure its readiness before the launch date, with less than 500 days are remaining for the launch.

• Several aspects related to the design, assembly of the structure, cameras and control have been verified.

• Other systems and components, as well as its ability to communicate with the ground station,  have been checked by the team.

• The Probe has also succeeded in all the tests it has been subject to so far, ahead of the five environmental tests to be conducted on the probe from June to December 2019.

• The next and final stage, prior to the probe's launch, will involve testing the probe's readiness to operate in outer space

• The probe is planned to reach Mars by 2021 to coincide with the 50th anniversary of the founding of the UAE.

Hope Probe has been developed in accordance with the Mars Exploration Programme Analysis Group (MEPAG), the global scientific community which is working on Mars exploration and coordinated with international entities to ensure the best results.

The implementation and supervision of the mission and its various scientific, educational and awareness initiatives is being done by the Mohammed bin Rashid Space Centre. The space centre is also executing and supervising all stages of the design, development and the launch of the probe in 2020.

The UAE Space Agency, on the other hand, is funding and supervising procedures and necessary details for the implementation of the project.

The UAE, through this ambitious project, has positioned itself amongst the leading countries in the field of space exploration and advanced space manufacturing.

Story 2- China to build moon station in 'about 10 years'

China plans to send a manned mission to the moon and to build a research station there within the next decade. The announcement was made by the head of China’s National Space Administration, Zhang Kejian during his speech marking ‘Space Day’.

Kejian revealed that the nation plans to build a scientific research station on the moon's South Pole within the next 10 years.

China aims to achieve space superpower status. The nation took a major step towards that goal when it became the first nation to land a rover on the far side of the moon in January 2019.

China has confirmed that its fourth lunar probe, the Chang'e-5, will be launched by the end of 2019.

The launch of Chang'e-5, which was originally scheduled to collect moon samples in the second half of 2017, was delayed after its planned carrier, the powerful Long March 5 Y2 rocket, failed during a separate launch in July 2017.

The nation also plans to launch a Mars probe by 2020.

China spends more on its civil and military space programmes than Russia and Japan and is second only to the United States.