The Union Cabinet chaired by Prime Minister Narendra Modi has approved a new umbrella scheme ‘Pradhan Mantri Annadata Aay SanraksHan Abhiyan’ (PM-AASHA).  The scheme aims to ensure that farmers get remunerative prices for their produce as announced in the Union Budget for 2018.

The scheme aims to ensure that farmers get remunerative prices for their produce as announced in the Union Budget for 2018. It will give a major boost to the pro-farmer initiatives of the Government.The Government had previously increased the MSP of Kharif crops by following the principle of 1.5 times the cost of production. The increase is expected to be translated to farmer’s income by the way of robust procurement mechanism in coordination with the state governments. 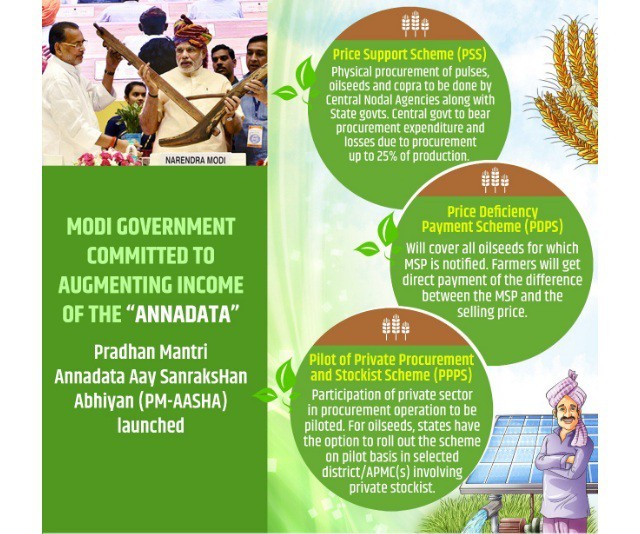 The Cabinet has decided to give additional government guarantee of Rs16, 550 crore making it Rs. 45,550 crore in total.

In addition to this, budget provision for procurement operations has also been increased and Rs 15,053 crore is sanctioned for the implementation of PM-AASHA.

For procurement of these agri-commodities during 2010-14, Government Guarantee of Rs 2500 crore was provided with an expenditure of only Rs 300 crore, while during 2014-18,

Guarantee amount has been increased to Rs 29,000 crore with an expenditure of Rs 1,000 crore.

• The Union Government is working with the holistic approach of solving any issue rather than in fragments.

• The Government has realised that increasing MSP is not adequate and it is more important that farmers should get the full benefit of the announced MSP.

• For the same, it is essential that if the price of the agriculture produce market is less than MSP, then in that case state governments and the central government should purchase either at MSP or work in a manner to provide MSP for the farmers through some other mechanism.

• With this approach, the cabinet approved the umbrella scheme of PM-AASHA with its three sub-schemes.

• The other existing schemes of Department of Food and Public Distribution (DFPD) for procurement of paddy, wheat and nutri-cereals/coarse grains and of Ministry of Textile for cotton and jute will be continued for providing MSP to farmers for these crops.