Aatish Taseer’s OCI status has been cancelled by the Home Ministry for concealing that his late father was of Pakistani origin.

The Union Home Ministry cancelled the Overseas Citizen of India (OCI) status of Aatish Taseer, a prominent Indian-origin journalist and novelist, on November 7, 2019 stating that he had concealed important information and not complied with very basic requirements to be eligible for the card.

The spokesperson of the Ministry of Home Affairs tweeted saying that Aatish Taseer is ineligible to hold the OCI card, as he had concealed the details that his late father was of Pakistani origin, while submitting his PIO application.

The spokesperson stated that Taseer had been given the opportunity to submit his reply and objections regarding his PIO/OCI cards, but he failed to dispute the notice. As a result, he was declared ineligible to hold an OCI card, as per the Citizenship Act, 1955. 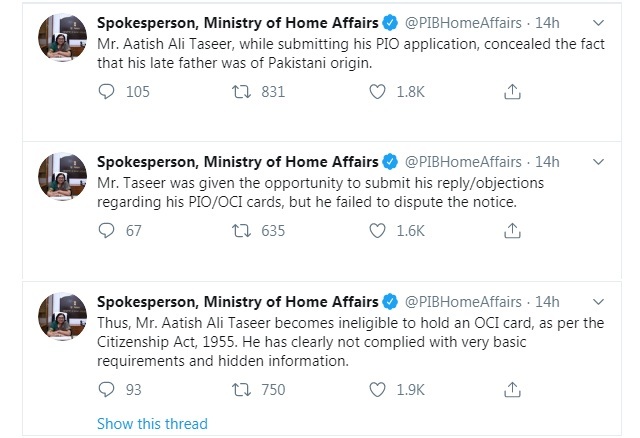 In response, Aatish Taseer disputed MHA’s claim and said that he was given very less time to respond to the clarifications about his submissions to the Indian government.

What is OCI Card?

The OCI card provides Overseas Citizenship of India status to a foreign citizen of Indian origin to live and work in India for an indefinite period. The OCI card was launched in 2005, under the Citizenship (Amendment) Act, 2005.

The OCI card was introduced after demands for dual citizenship grew, especially from the Indians living in developed countries. The Indian constitution does not allow its citizens to hold dual citizenship.

While the OCI card allows the holders to live and work in India, it has its own limitations as the citizens having the card do not enjoy the right to vote, right to hold constitutional offices or the right to buy agricultural properties.

In the UK, however, the OCI card is considered as holding dual nationality.

Under the eligibility criteria for the OCI card, the holder must be a citizen of another country and have the passport of the nation, except that of Pakistan and Bangladesh.

The Indian government provides the Overseas Citizen of India status if the holder:

• Was eligible to become Indian citizen on January 26, 1950 or is a child, grandchild or great-grandchild of such a citizen

• is a minor child, whose parents are both Indian citizens or one parent is a citizen of India

Disqualification criteria: Who is not eligible for an OCI card?

2. Those who served as a member of any foreign military are also not eligible to register for the OCI card.

Aatish Taseer is the son of a senior Indian journalist and columnist Tavleen Singh. Taseer’s father was, Salman Taseer, the Governor of Punjab in Pakistan.

Salman Taseer was one of the leading politicians in Pakistan. He was assassinated in 2011 by a bodyguard for defending a Christian woman in a blasphemy case.

Aatish Taseer has reportedly declared Tavleen Singh as his sole legal parent and guardian. Aatish Taseer had previously held the Person of Indian Origin card until 2015 when the government merged the card with the OCI card scheme.