USS Constitution, the world’s oldest warship took off recently on its first sail since three years. The ship sailed from Charlestown Navy Yard in Boston to Fort Independence on Castle Island to celebrate US Navy’s 242nd birthday and the 220th anniversary of the iconic vessel's maiden voyage. 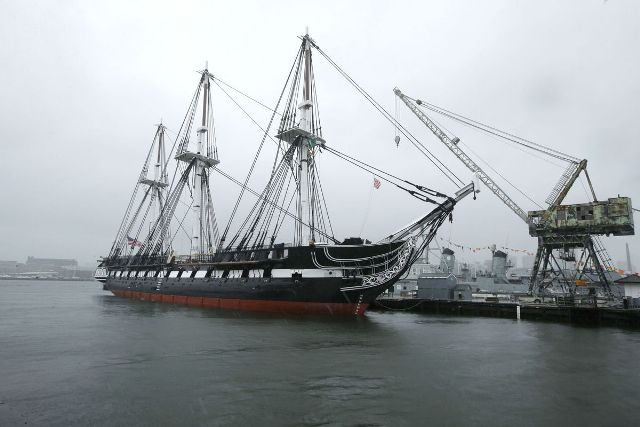 USS Constitution, the world’s oldest warship took off on its first sail since three years on 20 October 2017. The newly refurbished ship had been moved to dry dock for major restoration till recently.

The ship sailed from Charlestown Navy Yard in Boston to Fort Independence on Castle Island to celebrate US Navy’s 242nd birthday and the 220th anniversary of the iconic vessel's maiden voyage.

• The warship fired a 21-gun salute in the waters off the fort Independence and fired another 17 times when it passed the US Coast Guard Station.

• The US Coast Guard station was the former site of the shipyard where the iconic ship was built and launched in 1797.

• This was the warship’s first sail since October 2014.

• The ship earned its nickname "Old Ironsides" during the War of 1812 against Britain.

• It was given its name by first US President George Washington after the Constitution of the United States of America.

• The ship is the world's oldest commissioned naval vessel afloat. It was launched in 1797.

• The ship was most noted for her actions during the War of 1812 against the United Kingdom, when she captured numerous merchant ships and defeated five British warships.

• The battle earned her the nickname of "Old Ironsides".

• The ship retired from active service in 1881 and served as a receiving ship, until being designated a museum ship in 1907.

• She sailed under her own power for her 200th birthday in 1997, and again in August 2012 to commemorate the 200th anniversary of her victory over the British warship, HMS Guerriere.

• The mission of the ship currently is to promote understanding of the Navy's role in war and peace through educational outreach, historical demonstration, and active participation in public events as part of the Naval History & Heritage Command.