Ocean Currents are a general movement of a mass of ocean water in a definite direction. They are similar to the winds in the atmosphere in that they transfer significant amounts of heat from Earth’s equatorial areas to the poles and thus play important roles in determining the climates of coastal regions. In this article, we are giving 10 important facts related to the Ocean Currents which will be helpful for the aspirants of the competitive exams like UPSC/PCS/SSC/CDS etc. 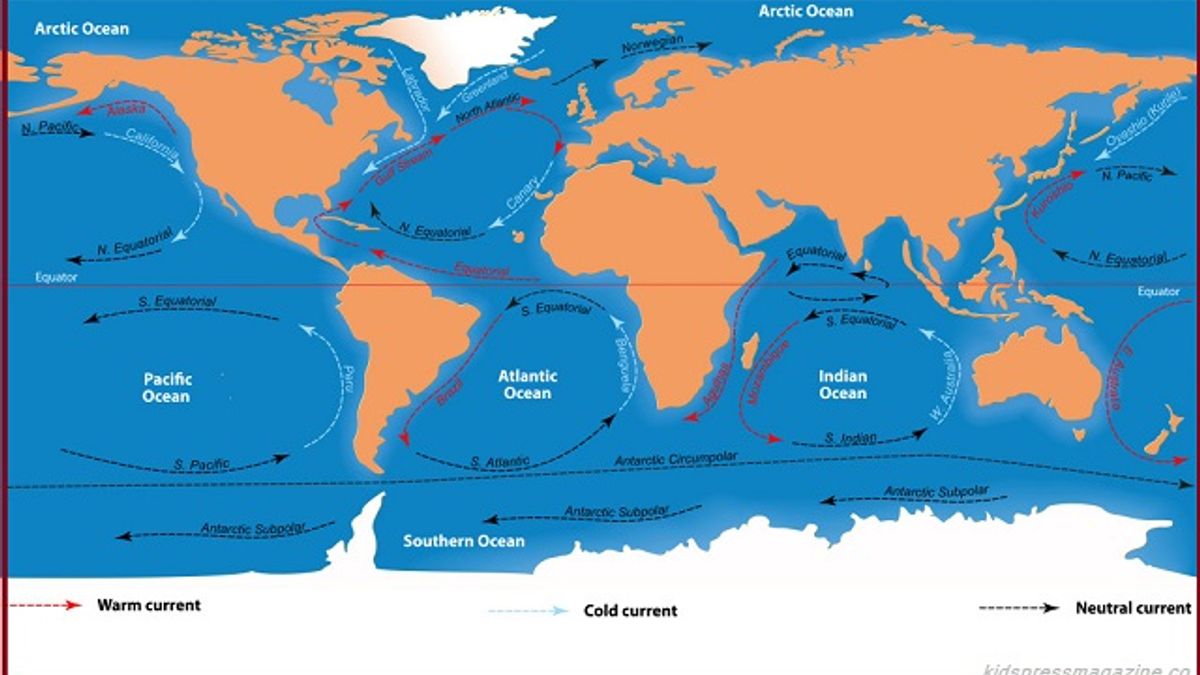 The general movement of a mass of Oceanic water in a definite direction is called Ocean Current. Drift current and stream are the classifications of Ocean Current which are classified on the basis of the direction of flow, speed and shape. There are four factors affecting the origin and flow of Ocean Currents i.e. Rotation and gravitational force of the Earth; Oceanic factors (temperature, salinity, density, pressure gradient and melting of ice); atmospheric factors (atmospheric pressure, winds, rainfall, evaporation and insolation); factors that modifying Ocean Currents (Direction, shape and configuration of coast lines, seasonal variations and Ocean bottom relief). It can be divided into two types- warm currents and cold currents. The currents flows from the equator to the poles are warm and those flowing from the poles to the equator are cold.

1. The continuous flow of ocean currents is a natural effort to bring a horizontal heat balance. When the ocean currents flow along the coasts modify the local weather conditions. Warm current raise the temperature of the coastal areas, whereas cold currents lower it.

2. Warm currents bring rain to the coastal areas because they supply moisture to the winds. North Atlantic Drift brings rainfall to the Western European parts and gives rise to a characteristic climate in which it rains throughout the year. Unlike warm currents, cold currents do not give rise to moisture laden winds and hence there is no rainfall in the coastal areas. These currents give rise to conditions which are the cause of desertification in the affected coastal areas. For Example- Kalahari Desert is the result of cold Banguela current, whereas the Patagonia Desert is the result of the cold Falkland current.

3. Cold polar currents bring large ice-bergs which are a source of fresh water. But these ice-bergs are very dangerous for the navigating vessels. For Example- the famous Titanic ship was drowned because of the iceberg brought by the cold Labrador Currents.

4. Ocean currents act as the distributing agents of nutrients. Oxygen and other elements necessary for the existence and survival of fishes. Ocean currents transport planktons from one area to the other. The planktons are useful food for the fishes. The favourable conditions for growth of planktons develop where the cold current and warm current meet. For Example- the cold Labrador Current and the warm Gulf Stream current met near Newfoundland where world famous fishing banks like Grand Bank and George’s bank have developed. The distribution of the anchovy’s fishes on the Peruvian coast is too related with the cold Peru or Humboldt Current because it brings planktons for these fishes.

5. The occurrence of fogs due to the convergence of warm and cold currents poses serious threats to navigation.

6. Ocean Currents act as major ocean routes which are followed by the navigating ships.

7. Warm currents keep the ports in the polar region operational because it makes an ice-free throughout the year. For Example- Most of the northern European ports remain ice-free due to the North Atlantic Drift and its branches. Norway is the most benefited region by this drift.

8. Ocean Currents plays important role in determining the monsoon of the Indian sub-continent.

9. There are tremendous potentialities of producing power from the ocean currents. For Example- Japan, Florida and Hawaii being considered for test projects in marine power generation. Ocean currents are also very important in the dispersal of many life forms. For Example, the life cycle of the European Eel.

10. Knowledge of ocean currents is essential in reducing costs of shipping, since travelling with them reduces fuel costs. In the wind powered sailing-ship era, knowledge of wind patterns and ocean currents is even more essential. For Example- Agulhas Current prevented Portuguese sailors from reaching India. In recent times, around-the-world sailing competitors make good use of surface currents to build and maintain speed.