On 12 November 2020, India participated in the 17th ASEAN-India Summit at the invitation of Vietnam, the current chair of ASEAN. The Summit focussed to create strategies and measures to recover the economic loses due to COVID-19 pandemic and the RCEP agreement was signed virtually by 15 countries. 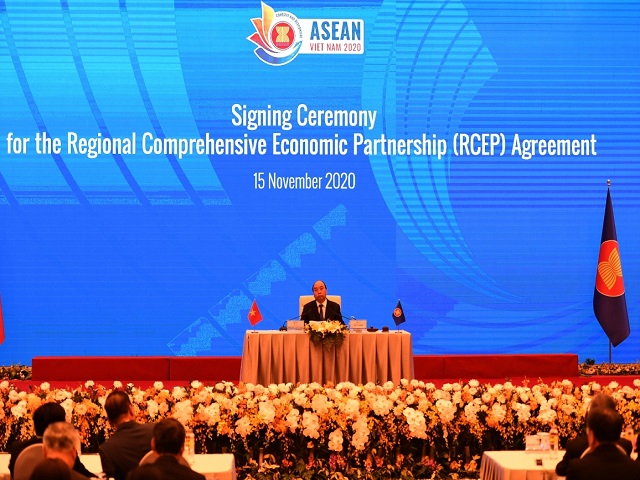 On 12 November 2020, Prime Minister Modi virtually participated in the 17th ASEAN-India Summit at the invitation of Vietnamese Prime Minister Nguyen Xuan Phuc, the current chair of ASEAN. The Summit saw the participation of all ten ASEAN members.

The 17th ASEAN Summit focussed to create strategies and measures to recover the economic loses due to COVID-19 pandemic.

Speaking at the Summit, Prime Minister Modi underlined the centrality of ASEAN in Act East Policy of India. He stated that a cohesive, responsive and prosperous ASEAN is central to India's Indo-Pacific Vision and contributes to Security And Growth for All in the Region (SAGAR).

He further underscored the importance of strengthening convergence between India's Indo-Pacific Oceans Initiative (IPOI) and the ASEAN Outlook on Indo-Pacific, to ensure a free, open, inclusive and rules-based Indo-Pacific region.

Speaking on the ongoing COVID-19 pandemic, he highlighted India's response and support to the International community and welcomed initiatives of the ASEAN members in fighting the pandemic.

4- India would explore ways to increase trade despite its exit from the 15-nation RCEP agreement in 2019.

5- The Summit also covered discussions on maintaining and promoting peace, stability, safety and security in the South China Sea, and ensuring freedom of navigation and overflight.

6- The importance of promoting a rules-based order in the region including through upholding adherence to international law, especially the United Nations Convention on the Law of the Sea (UNCLOS) was also highlighted.

7- India underscored the importance of diversification and resilience of supply chains for post-Covid-19 economic recovery.

8- India called for an early review of  ASEAN-India Trade in Goods Agreement (AITIGA), which is pending for a long time.

1- On 8 August 1967 in Bangkok, Thailand, ASEAN was set up with the signing of the ASEAN Declaration (Bangkok Declaration) by the founding fathers of ASEAN, namely Indonesia, Malaysia, Philippines, Singapore and Thailand.

2- It is a regional grouping, constituted to promote economic, political, and security cooperation.

3- ASEAN Members are as follows:

4- The Chairmanship of the ASEAN rotates annually based on the alphabetical order of the English names of Member States.

5- ASEAN member nations have a total population of 650 million people and a combined GDP of USD 2.8 trillion.

6- India is the 4th largest trading partner in ASEAN with about USD 86.9 billion trade.

List of Five Summits, India to participate in November 2020