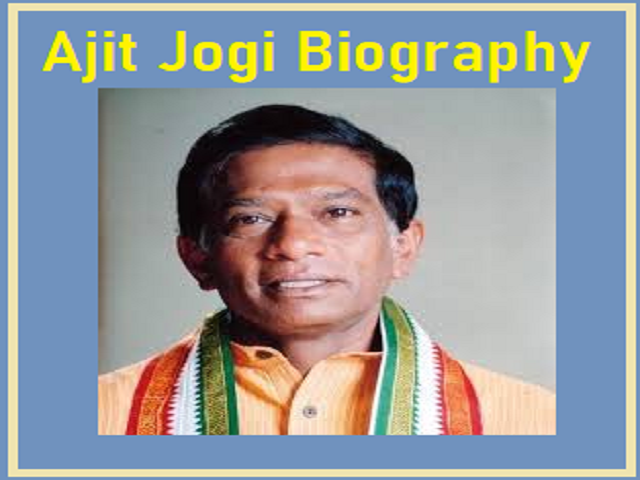 Ajit Jogi was an Indian politician and a member of Indian National Congress (INC) party till 2016.  He was a gold medalist in Mechanical Engineering. Mostly, he was associated with the welfare and development of the backward and weaker sections of the society, including the minorities, the backward classes, the Scheduled Castes, Scheduled Tribes, the leprosy patients, and the handicapped.

He was born on 26 April, 1946 in a village Pendra Road of Bilaspur District in Madhya Pradesh, India. His father name was Shri Kashi Prasad Jogi. On 8 October, 1975, he married Dr. Renu Jogi and both have a daughter and a son namely Anusha Jogi and Amit Jogi.

He studied Mechanical Engineering from the Maulana Azad College of Technology, Bhopal and earned University's gold medal in 1968. He also studied L.L.B. from Delhi University and V.U. (G.M) from Vikram University, Ujjain in Madhya Pradesh. He worked as a lecturer at the Government Engineering College, Raipur from 1967 to 1968. He got selected for the Indian Administrative Services and Indian Police Services. By profession, he was an educationist, a teacher, civil servant, social and political worker.

His hobbies and favourite pastime were reading, writing, and hunting which is now banned in India. He also liked swimming, gliding, trekking, horse riding and yoga. He had also written several articles on public administration, poems and stories that were published in newspapers like the Indian Express, The Times of India and The Hindustan Times.

- During 1986-87, he was a member of the All India Congress Committee (AICC) on Welfare of Scheduled Castes and Scheduled Tribes.

- He was a member of Committee on Public Undertakings.

- A Member of Committee on Industries.

- A Member of Committee on Railways.

- A Chairman of State SC and ST Commission (Madhya Pradesh).

- In 1989, he was a Central Observer, Congress Party for elections to Lok Sabha from constituencies in Manipur State.

- In 1995, he was a Central Observer, Congress Party Sikkim Assembly Elections.

- In 1995-96, he became the Chairman, Committee on Science and Technology, and Environment and Forests.

- In 1996-99, he was an Executive Committee Member, Congress Party in Parliament

- In 1997, he was an Observer, Delhi Pradesh Congress Committee Elections Member, A.I.C.C and

Member, Committee on Transport and Tourism

- From 1997-99, he was a Chief Spokesman of Congress Parliamentary Party.

- In October 2000, he became Chairman of Scheduled Castes, Scheduled Tribes and other Backward Classes Department, AICC.

- From 1998-2000, he was a Working President, Madhya Pradesh Congress Committee in charge of Chhattisgarh and Chairman of Central Election Committee Arunachal Pradesh Vidhan Sabha Election.

- In 2000-01, he was an Acting President of Congress Committee Chhattisgarh Pradesh

- In 2000-03, he was a Member of Chhattisgarh Legislative Assembly and became the first Chief Minister of the state.

- In August 2006, he was a Member of Home Affairs Committee.

- In August 2007, he was a Member of Home Affairs Committee.

- In 2008, he was a Member of the Legislative Assembly of Chhattisgarh, representing the Marwahi constituency.

Ajit Jogi: Some Activities and Achievements

- He was the President of the Students' Union at Maulana Azad College of Technology, Bhopal in 1967.

- He was a President of the Student Body of the Lal Bahadur Shastri Academy of Administration in Mussoorie during 1970 to 1971.

- He was also associated with several organisations organizations related with environment protection; development of tribal and folk art and culture; and youth education, welfare and employment.

- He worked for environment protection, tribal and folk art and culture of India; youth welfare, education and employment.

- In recognition of his services and as a social activist several villages irrigation tanks, roads and urban localities in Sidhi, Shahdol, Raipur, Indore, etc. have been named after him. He also worked for all round development of Chhattisgarh as a Chief Minister.

- He holds membership in:

President of the Residency Club in Indore

From 1971 to 1973, Madhya Pradesh Badminton Association

In 1996, for the 50th Anniversary Celebrations, Indian Delegation to the United Nations, New York

In 1996, Indian Delegation to the Centennial Olympic Games, Atlanta.

- From 1988 to 1990, he was a Chairman of the State Government Minor Forest Produce Committee.

- He was also the Governing Bodies Member namely:

Council of Indian Institute of Technology

- In 1989, he spread general awareness and mobilise support for the Congress Party by Padyatra covering 1,500 km in the eastern tribal belt of Madhya Pradesh.

- To stop the entry of MNCs in the Diamond Mining Sector and awareness among the tribes, he also organised Padyatra in the diamond belt from Manipur to Deobhag in the Raipur District, covering 185 km in January 1997.

- From 1974 to 1986, he also holds the All India record of the longest-serving Collector/District Magistrate for 12 years at the districts of Shahdol, Sidhi, Indore and Raipur of Madhya Pradesh.

- The Role of District Collector

- Sadi ke is mod par (an anthology of weekly columns written at the fin de siecle);

In 1984, conferred “Most Outstanding Man” of the State Award by Giants’ International.

Ajit Jogi worked towards the weaker section of the society, mainly Scheduled Castes and Scheduled Tribes, minorities and backward classes. Not only this but also helped physically challenged and leprosy patients, etc.