Arunachal Pradesh 34th Statehood Day: All you need to know 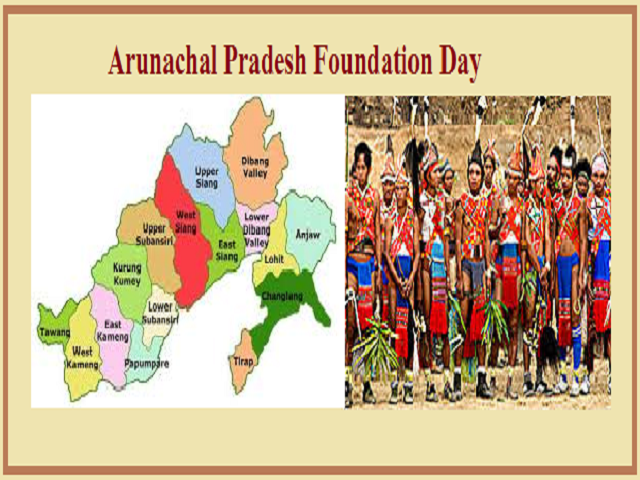 Earlier, in the British colonial era, it was known as the North-East Frontier Agency and the area was part of Assam. In 1972, it became the Union Territory of India.

The Capital of Arunachal Pradesh is Itanagar where the celebration will be held at IG Park. Home Minister Amit Shah will lay the foundation stone of the new headquarters of the Arunachal Pradesh Police. Industrial Investment Policy, 2020 will also be launched by Amit Shah and inaugurate the Joram Koloriang Road constructed by the Border Roads Organisation (BRO).

The name of the state is mentioned in ancient Hindu literature including the Kalika-Purana and in some epic poems like Mahabharata and Ramayana.

Arunachal Pradesh: Facts at a Glance

On 20th February, 1987, Arunachal Pradesh became a full-fledged State. It was known as the North-East Frontier Agency (NEFA) till 1972. On 20 January, 1972, it gained the status of the Union Territory and renamed as Arunachal Pradesh.

An elected Legislative Assembly was constituted on 15 August 1975 and the first Council of Ministers assumed office. In February 1978, the first general election to the Assembly was held. For proper administration, the State is divided into 16 districts. Itanagar in Papum Para district is the capital of Arunachal Pradesh. Let us tell you that Itanagar's name was kept after Ita fort meaning fort of bricks that was built in 14th century AD.

As the state name is mentioned in ancient literature and epic poems, this place is also known as the Prabhu Mountains of the Puranas. At this place, the sage Parshuram atoned for his sin, sage Vyasa meditated, King Bismaka founded his kingdom and Lord Krishna married Rukmini. The archaeological remains are scattered in several places of Arunachal Pradesh which make it rich in cultural heritage.

The Brahmaputra and its tributaries are the major rivers of the state. In the Tibet Autonomous Region of China, the Brahmaputra is known as Tsangpo and Dihang or Siang in Arunachal Pradesh where it flows towards east from Mansarovar Lake in Tibet before falling South through the Himalayas into north-central Arunachal Pradesh. Let us tell you the tributaries of Brahmaputra River are Dibang (Sikang), Lohit, Subansiri, Kameng, and Tirap.

Types of soil depend upon the terrain. Generally, it is acidic and in the mountainous region, it is subject to erosion. Major types of soils found are inceptisols, entisols, and ultisols. Rich alluvial soil is found around the river valleys that are good for agriculture.

Most of the population of Arunachal Pradesh is mainly dependent on agriculture that is on jhum cultivation. People are also encouraged for other cash crops cultivation like potatoes and horticulture crops like apples, oranges, and pineapples.

Several festivals are celebrated in Arunachal Pradesh and some of them are as follows: Mopin and Solung of the Adis, Lossar of the Monpas and Boori-boot of the Hill Miris, Sherdukpens, Dree of the Apatanis, Si-Donyi of the Tagins, Reh of the ldu-Mishmis, Nyokum of the Nishs, etc. The common ritual performed by the people of Arunachal Pradesh in most festivals is animal sacrifice.

In 1991, APMDTCL was set up for conservation and explorations of vast minerals. Later, APMDTCL took the charges of Namchik-Namphuk coal fields. There are two industrial Training Institutes at Roing and Daporijo to provide training to craftsmen in different trades.