Chips in Indian Passport (E-Passport) : All you need to know

Government of India is planning to launch e-passport which will have a chip embedded in it. This is to ensure the security of the passport holder's data. How e-passport will work, what are the features of e-passport? Let us find out! 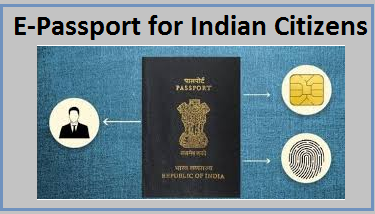 In near future e-passports will have a chip for advanced security features so that nobody can misuse passport. According to the Minister of State for External Affairs V Muraleedharan told that the chip will store personal details of an applicant embedded in the physical passport booklet.

The main aim to issue e-passport is that if anyone tampers with the chip, the system shall be able to identify and as a result the authentication of the passport will be failed. In other words, we can say that now it will be difficult to produce fake or counterfeit copies.

What is a passport?

It is an official document which is issued by the Government. It certifies the holder's identity and citizenship. And entitle them to travel under its protection to and from foreign countries. Or we can say that passport is a travel document issued by the government to its citizen that verifies the identity and nationality of the holder for the purpose of international travel.

What is an e-passport?

E-passport is also known as electronic passport which is nothing but a regular passport booklet consisting of an electronic chip in the cover. It provides an extra security against the fraud of passport.

- E-passport will be developed by IIT-Kanpur, National Informatics Centre (NIC) and India Press (ISP) and the Ministry of External Affairs officials.

- The tender will be in three stage and will see the procurement of the operating system of electronic contactless inlays. It is necessary for the manufacturing of e-passports.

- E-passport will have thicker back and frontier covers.

- At the back cover of the passport, a small silicon chip smaller than a postage stamp will be placed.

- At the immigration counters, e-passport will help in saving time because everything will be digitalised and will take second to read the information.

- Up to 30 international visits, data will be stored in the chip.

- The chip will have a memory space of 64 kilobytes.

- One more thing that the chip is also designed in such a way that the data present on the passport cannot be wiped remotely.

- When the tender and the procurement process is completed by the ISP, e-passport manufacturing will commence.

With these features the e-passport will be a bit heavier and thicker. But it will be more secure as tampering with the chip in any way would result in the failure of the authentication of passport.

- Let us tell you that in 2018, Ministry of External Affairs has issued over 1.12 crore passports and in 2017 more than 1.08 crore passports were issued in India through Passport Seva Project.

Do you know that with the issuing of e-passport, India will join around 120 other nations including the US, UK, and EU who have already adopted e-passports.

How passport is issued?

- Through Passport Seva online portal, an individual will register himself.

- After successful registration, a user ID is generated which is required to login the Passport Seva Online Portal.

- In the passport application form, it is required to fill the personal details.

- After completion of the process, submit it and required payment is done.

- After that, an appointment in the passport office is scheduled.

- Also, police plays an important role in timely delivery of the passport. According to government in 2018, the average time taken for police verification had come down to 19 days and to bring this period further down government is working.

So, now you may have come to know that e-passport will have chip embedded in it. Chip will be made up of silicon and placed at the back cover of the passport. No doubt it will advance security features. The personal particulars of the applicants will be digitally signed and will be stored in the chip which will be embedded in the physical passport booklet. With this no one can misuse the passport. It is a good step that government is taking.

What is PAN Card, PAN Number, Uses and Benefits