Colonel Santosh Babu Biography: In a recent stand-off with China at the Line of Actual Control (LAC), Commanding Officer of the 16th battalion of Bihar Regiment, Colonel Santosh Babu was martyred. His mortal remains have reached Telangana and the last rites will be performed today. 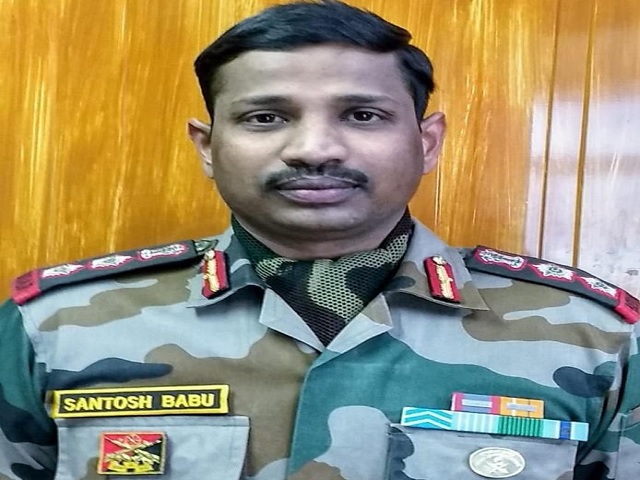 The mortal remains of Colonel Santosh Babu, the Commanding Officer of the 16th battalion of Bihar Regiment have reached in Telangana to perform last rites. The crowd raised slogans of "Santosh Babu amar hai" as the coffin was brought out of the ambulance by the army personnel.

The funeral will take place today at the family's own land. In the morning, the family members will perform their rituals and the last rites will be performed as per army honours. Keeping in view the COVID-19 pandemic, only 50 people are allowed to attend the last rites.

In a recent stand-off with China at the Line of Actual Control (LAC), Commanding Officer of the 16th battalion of Bihar Regiment, Colonel Santosh Babu was martyred. This was the first fatal clash between India and China since 1975. The Defence Ministry communicated the tragedy to her wife on Monday night in Delhi. She conveyed the same to her in-laws on Tuesday morning. Chief Minister K Chandrasekhar Rao was shocked over the martyrdom of Colonel Santosh Babu and conveyed his heartfelt condolences to Colonel Santosh’s parents, wife, children and other family members.

Colonel Santosh Babu was born in the year 1982 to Upender and Manjula in Suryapet, Telangana. He was a follower of Christianity. His father is a retired bank manager while his mother is a homemaker. Colonel Santosh Babu did his schooling from Korukonda Sainik School and was trained at National Defence Academy, Pune. He further studied at the Indian Military Academy, Dehradun.

Colonel Santosh Babu was married to Santoshi and the couple has two children-- Abhigna (Daughter) and Anirudh (son). His daughter is 8 while his son is 4 years old.

In the recent violent clashes with China at LAC (Line of Actual Control) in the Galwan Valley in the Eastern Ladakh region, Colonel Santosh Babu was martyred along with two other jawans. He was the Commanding Officer of 16 Bihar Regiment.

Colonel Santosh Babu joined the military unit at Galwan valley in the recent stand-off with China at LAC. He was leading the team which was removing the illegal tent set up by Chinese forces on the Indian side of LAC but was trapped and martyred at the age of 37 years.

Colonel Santosh was the only son of his parents. As per his parents, his transfer was due in September to Hyderabad. His mother said that she is grieving but is proud and happy at the same time as her son sacrificed his life for the country.

As per the official statement by the Indian Army, 'During the de-escalation process in Galwan Valley, a violent face-off took place last night with casualties. The loss of lives on the Indian side includes an officer & 2 soldiers. Senior military officials of the two sides are currently meeting at the venue to defuse the situation'.