Ionic compounds are also known as electrovalent compounds. The strong force of attraction developed between the oppositely charged ions is known as ionic bond. It consists of ions. In this article we will study about ionic compounds, its properties, examples in the form of questions and answers. 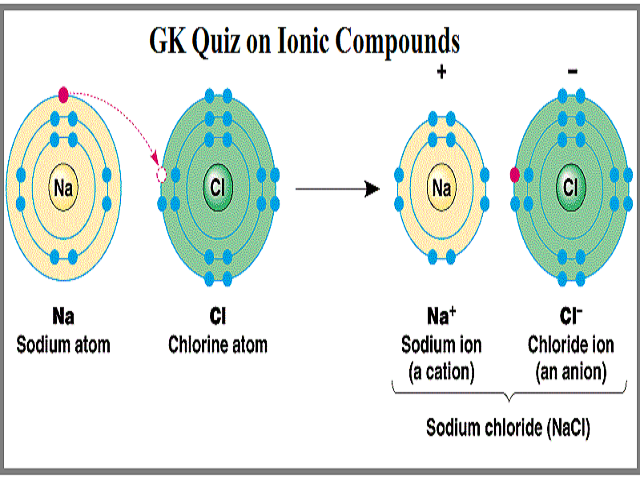 Let us see one example between metal and a non-metal:  In the formation of an ionic bond metal atom donates one or more electrons to the non-metal atom. By losing electrons, metal forms a positively charged ion or cation. Similarly, by gaining en electron non-metal forms a negatively charged ion or anion. Also, we know that positive ions and negative ions attract one another. The strong force of attraction developed between the oppositely charged ions is known as ionic bond.

Do you know why Oil and Water does not mix together?
6. Ionic compound are soluble in:
A. Ether
B. Alcohol
C. Kerosene
D. Water
Ans. D
Explanation: Ionic compounds are soluble in water but insoluble in organic solvents like ether, acetone, alcohol, kerosene oil etc.
7. What is an ionic bond?
A. Ionic bond is formed by sharing of electrons between two atoms.
B. It is a bond formed by the transfer of electrons from one atom to another.
C. Both A and B are correct
D. None of the above
Ans. B
Explanation: Ionic bond is formed by the transfer of electrons from one atom to another.
8. Name the ions present in Sodium Oxide compound?
A. Sodium ions
B. Oxide ions
C. Both A and B
D. Neither A nor B
Ans. C
Explanation: The ions present in Sodium Oxide compound are: Sodium ions and oxide ions.
9. Which of the following are electrovalent compounds?
A. Copper Sulphate
B. Calcium Nitrate
C. Magnesium Oxide
D. All of the above
Ans. D
Explanation: Electrovalent compound are ionic compounds and so all the options given in the question forms ionic bond.
10. What is the electronic configuration of calcium ion (Ca2+)
A. 2,8
B. 2,8,2
C. 2,8,4
D. 2,8,8
Ans. D
Explanation: The atomic number of calcium is 20 so its electronic configuration is 2,8,8,2 and so has 2 electrons in the outer most shell. Therefore to form calcium ion (Ca2+), calcium will lose 2 electrons and its configuration becomes 2,8,8.
From the above article we have learnt what are ionic compounds, how they are formed, what are the properties of ionic compounds etc.