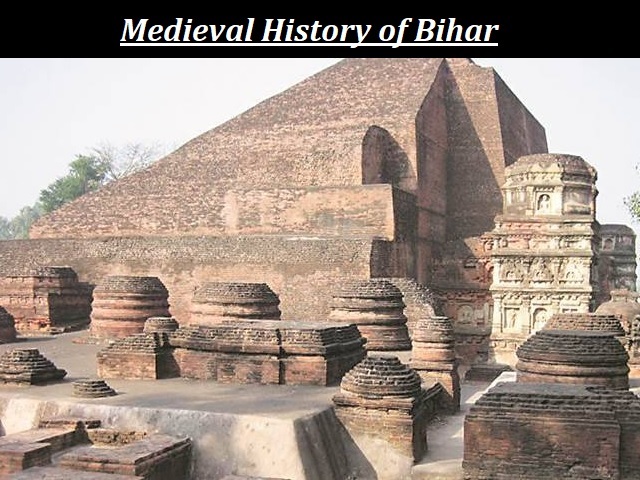 Medieval History of Bihar is commemorated by the foreign invasion and dynasty that ruined the glory of Bihar. The invasion and war of succession made the darkest age of all times because the invasion famed and defamed the great school of education in Bihar which could teach the students about the greatness of their culture and people laden with high taxes.

Mohammad Bin Bakhtiyar Khilji was one of the Military Generals of Qutb-ud-din Aibak who invaded some parts of eastern India at the end of the 12th Century and at the beginning of the 13th century. During his invasion, many of the Viharas and universities were sacked and thousands of Buddhist monks were massacred.

3. He established a town called Bakhtiyarpur.

4. He was assassinated by Ali Mardan and his mausoleum is in Bihar Sharif.

During slave rule, the local ruler was independent but they gave taxes to the rulers because they had control over Maner-Bihar Sharif, Bhojpur, Gaya, Patna, Munger, Bhagalpur, Santhal Pargana, Nalanda, Lakhisari and Vikramashila.

When Allauddin Khilji ascended on the throne in 1296 AD hesent Sheikh Mohammad Ismail to conquer Darbhanga. But Sheikh Mohammad Ismail was defeated by local ruler Raja Sakra Singh. Then again he invaded Darbhanga and made his allies. After the war treaty, the local king participated in the Ranthambore invasion. Later, Hatim Khan who was the son of Firozshah was made governor of Bihar between 1315- 1321 AD.

The invasion of Gayasuddin Tughlaq created chaos in the region because some local king like Harisingh fled from the region, some rulers like Sunar Gaon King Gyasuddin Bahadur revolted and defeated, and some rulers showed friendly gesture. But after all the chaotic situation created by the invasion, the Tughlaq Dynasty resurrects the ruling condition and made Ahmad Governor of the Tirhut region.

Some Tughlag coins have been found from Tirhut that show the ruling control over the region. It also provides valuable information on tax collection as land tax which was called Kharaj. During Tughlaq rule, Darbhanga was called as Tughlaqpur and also during this time, Bihar name was given. Malik Ibrahim was the most capable ruler of the Tughlag Dynasty in Bihar.

It came into existence after political changes in the Delhi when Sikandar Lodhi ascended on the throne. He made Dariya Khan Lohani as an administrator of Bihar who was an able administrator. Bahar Khan Lohani followed him and declared as independent ruler by adopting the title of ‘Sultan Mohammad’.

Jalal Khan, who was a son of Sultan Mohammad sworn as a ruler under the protection of Farid Khan or Sher Khan. Farid khan led the invasion in Bengal and successfully defeated and hence, he was given the title of ‘Hazrat-e-Ala’.

This dynasty was emerged after the decline of Pala dynasty and established a powerful state in Bhojpur, Saran, Champaran, Muzaffarpur and Palamu district.

This dynasty was emerged when Bhojraj killed Sahasbal of Cher. He is known as Santan Singh in Bhojpur. After him, region was ruled by Somraj followed by Harraj and Sangram Dev who made Dhaba as his capital.

Raja Narayana regained the glory of the Ujjain Dynasty and made Buxar as his capital till British came here.

The Golden era of Medieval Bihar was in zenith point during the rule of Sher Shah Suri. Before being called as Sher Shah, he was known as Farid Khan. He took the title of Sher Shah Sultan-e-Adil after the victory in the battle of Chausa.

Bihar was ruled by this dynasty after the advent of Akbar the Great, the Mughal Empire. Munim Khanam was made Governor of Bihar and in 1780, Bihar was declared as a province of Mughal Empire.

Aurangzeb had made his grandson Azim as Subedar of Bihar who rebuilt Patliputra and renamed it Azimabad. Farrukshiyar was the first Mughal ruler who sworn in Patna.

With the decline of Mughal, Bihar was ruled by Nawab of Bengal who allowed trade to flourish. Some of the greatest fairs (Mela) of sub-continent like Sonepur Mela were allowed to continue because it invites traders from far and near that will helps in economic prosperity.