What is the National Language of India?

India has no National Language as per the Constitution but has Hindi and English as the official languages. Read the article to know more about the Official Languages and Scheduled Languages of India.

"Normally, in India, a majority of the people have accepted Hindi as a national language and many people speak Hindi and write in Devanagari script but there is nothing on record to suggest that any provision has been made or order issued declaring Hindi as a national language of the country," Gujarat High Court while dismissing a PIL seeking direction for mandatory printing of details of goods such as price, ingredients used and date of manufacturing in Hindi on the grounds that it was the National Language of India.

India has no National Language as per the Constitution but has Hindi and English as the official languages. As per Article 343 of the Indian Constitution:

(1) The official language of the Union of India shall be Hindi written in Devanagari script.

(2) Notwithstanding anything mentioned in clause (1), for a period of fifteen years from the commencement of this Constitution, the English language shall continue to be used for all the official purposes of the Union of India for which it was being used immediately before such commencement:

(3) Notwithstanding anything in this article, Parliament may by law provide for the use, after the said period of fifteen years, of— (a) the English language, or (b) the Devanagari form of numerals, for such purposes as may be specified in the law.

The Official Languages Act, 1963, allowed for the continuation of English alongside Hindi in the Indian Government indefinitely until legislation is passed to change it. 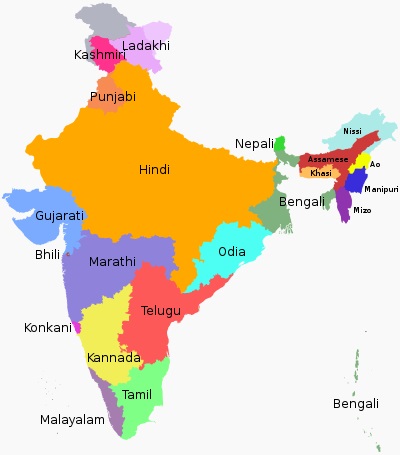 Read- 10 Most Spoken Languages in India by Number of Speakers

Schedules Languages of India: Areas where they are spoken and year of recognition

Of these languages, 14 were initially included in the Indian Constitution. The Sindhi language was added in 1967. Thereafter, three more languages-- Konkani, Manipuri and Nepali were included in 1992. Subsequently, Bodo, Dogri, Maithili and Santhali were added in 2004.

At present, there are increased demands for the inclusion of 38 more languages in the Eighth Schedule to the Constitution. These are as follows:

“As the evolution of dialects and languages is dynamic, influenced by socio eco-political developments, it is difficult to fix any criterion for languages, whether to distinguish them from dialects, or for inclusion in the Eighth Schedule to the Constitution of India. Thus, both attempts, through the Pahwa (1996) and Sitakant Mohapatra (2003) Committees to evolve such fixed criteria have not borne fruit. The Government is conscious of the sentiments and requirements for inclusion of other languages in the Eighth Schedule and will examine the requests keeping in mind these sentiments, and other considerations such as the evolution of dialects into language, widespread use of a language etc.," Ministry of Home Affairs on the inclusion of languages in the Eighth Schedule to the Constitution.

How many languages were initially added to the Indian Constitution?

14 languages were initially included in the Indian Constitution. The Sindhi language was added in 1967. Thereafter, three more languages-- Konkani, Manipuri and Nepali were included in 1992. Subsequently, Bodo, Dogri, Maithili and Santhali were added in 2004.

How many languages have been granted the status of Scheduled Languages of India?

What are the Official Languages of India?

Hindi and English are the two Official Languages of India.

What is the National Language of India?

As per the Indian Constitution, there is no National Language of India.