Optical Illusion for Testing Your IQ: Can you spot 3 Hidden Faces inside Twin Sisters Picture in 7 Secs?

Optical Illusion for Testing Your IQ: People with High Intelligence can spot the 3 hidden faces inside Twin Sisters Picture. Can you spot the three hidden faces within 7 seconds?

Optical Illusion for Testing Your IQ: Do you like to solve puzzles that tests your observation, deduction, and visual acuity skills? Then this optical illusion test is for you! If we go by the definition, an optical illusion is a deeply fascinating, mind-bending and shape-shifting image of an object or people or a drawing that challenges our way of perceiving things. There are several types of optical illusions such as physiological, physical and cognitive illusions. Some optical illusions are like riddles and visual challenges that are also a part of psychoanalysis as they throw some light on how your brain perceives things. One such clever illustration can be seen in an image where 3 faces are hiding somewhere in the twin sisters picture. 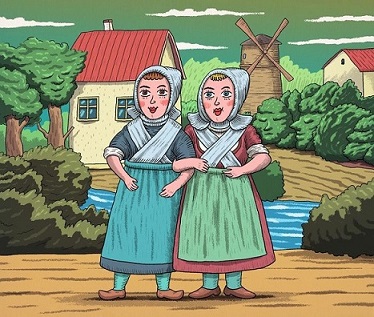 The above image has been designed as a brain teaser for children as well as adults. In this optical illusion, a twin sisters are standing in a farm water where a stream of water is flowing. Behind them there are trees, a windmill and houses are scattered around the farm. However, the there are three hidden faces that are hiding somewhere inside the farm.

Can you find the 3 Hidden Faces in 7 Seconds?

The three hidden faces are hiding in the trees behind the twin sisters. The first face is hiding on the left-side tree and the other two faces are hiding in the right-side trees in the farm picture. It has been claimed that people with good observation skills and above average intelligence level will be able to spot the three hidden faces in this optical illusion. Many research and studies have showed that the more you exercise your brain with mind puzzles, the smarter you tend to be.

Optical illusions always give some fascinating insight into how our brains work. In such type of puzzles, you need to appeal to the imagination and deduction rather than reason. This makes good exercise for people’s minds of all ages. So tell us, were you able to spot the three hidden faces inside this Optical illusion?