Pinarayi Vijayan Biography: CPI (M) veteran sworn in as Kerala CM for the second time in a row

CPI (M) veteran Pinarayi Vijayan took oath as Kerala CM for the second term in a row after he pulled off a landslide victory in the Kerala Assembly Elections 2021. 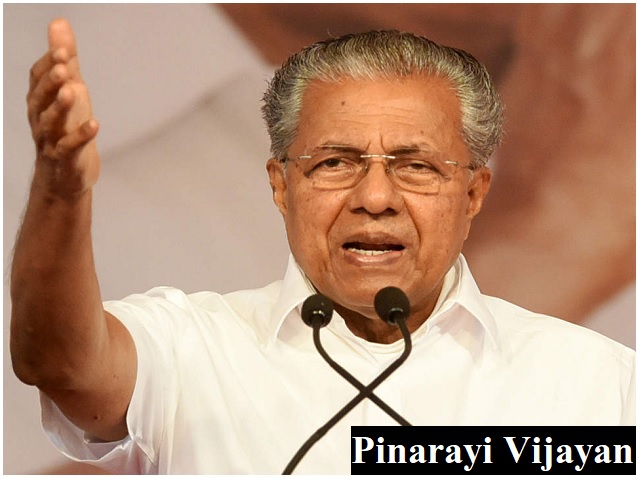 After scripting history by becoming the first Kerala CM to be re-elected after completing a full five years term in office, CPI (M) veteran Pinarayi Vijayan took oath as Kerala CM for the second term on 20 May 2021.

Thiruvananthapuram: Pinarayi Vijayan takes oath as the Chief Minister of Kerala, being sworn in by Governor Arif Mohammad Khan. pic.twitter.com/HyWRDh9u3u

The swearing-in ceremony was held in strict adherence to COVID-19 protocol at the Central Stadium in Thiruvananthapuram. Pinarayi Vijayan is the Chief Minister of the state since 25 May 2016.

Apart from serving as the Chief Minister of West Bengal, he previously held several key positions in the Government of Kerala such as Minister of Electric Power, and Co-operatives.

Pinarayi Vijayan (age 75) was born on 24 May 1945 in Pinarayi, Malabar District, Madras Presidency, British India to Koran and Kalyani.

Before joining Government Brennen College, Thalassery for the pre-university course, Pinarayi Vijayan worked as a handloom weaver for a year. He obtained a B.A. degree in Economics from the same college.

While studying at Government Brennen College, Thalassery, Pinarayi Vijayan got involved in politics through student union activities. Eventually, he joined the Communist Party of India (Marxist) in 1964. He served as the Kannur district secretary of the Kerala Students Federation (KSF) [present-day Students Federation of India (SFI)] and went on to become the state secretary and the state president of KSF.

Later, he joined the Kerala State Youth Federation (KSYF) [present-day Democratic Youth Federation of India (DYFI)] and became the president of the state committee. At that time, the communists in Kerala were organising political activities from different hide-outs. Pinarayi Vijayan was involved in such activities and was jailed for one and a half years.

He then moved on and served as the president of the Kerala State Co-operative Bank. During the Emergency imposed by the former Prime Minister of India, he was arrested and tortured by Police.

When M.V. Raghavan left CPI (M) over the 'alternative document' row, he became the Kannur district secretary of the party. Within three years, he became a member of the State Secretariat.

In 1970, he contested from the Kuthuparamba Assembly Constituency and defeated Thayath Raghavan of Praja Socialist Party by 743 votes.

In 1977 and 1991, he won again from the same constituency, each time with a higher percentage of votes.

In 1996, he contested from Payyanur Assembly Constituency and defeated K. N. Kannoth of the Indian National Congress by 28,078 votes. He served as the Minister for Electric power and Co-operatives in the E.K. Nayanar Ministry from 1996 to 1998.

Following the death of the incumbent Chadayan Govindan, Pinarayi Vijayan became the state secretary of the CPI(M) in 1998.

In 2002, he was elected to the Politburo of the CPI(M). On 26 May 2007, he was suspended from the Politburo, along with  V. S. Achuthanandan for public remarks on each other. However, he was later reinstated.

In 2016, he contested from Dharmadom Assembly Constituency and defeated Mambaram Divakaran (INC) by 36,905 votes. He became the Chief Minister of Kerala for the first time. He held the charge of Home Affairs & Vigilance Departments along with the other portfolios normally held by the Chief Ministers.

Pinarayi Vijayan as a Chief Minister

In a first in India, the Pinarayi Vijayan ministry introduced a yearly Progress Report to mark accountability and transparency of the ruling party. The report card mentions the evaluation and performance of the ministry as to the election manifesto released by the Left Democratic Front. His ministry made history by fulfiling 570 of 600 poll promises made in the election manifesto by December 2020.

His Ministry introduced four missions for building Nava Keralam in 2016. The project includes the following:

1- LIFE Mission: A project to solve the problems of all categories of people including homeless and landless. The project completed more than 2 lakh homes for the homeless.

2- Ardram Mission: A project to make the health sector public-friendly, affordable for the poorest, and state of the art infrastructure facilities. Under this mission, super speciality facilities were extended to district and taluk hospitals that were earlier limited to medical colleges.

3- Haritha Keralam Mission: A project for cleaner water bodies across the state. It was a participatory program on the lines of literacy mission, democratic decentralization and peoples planning. The mission involved the removal of solid waste, removal of wastewater and measures to increase the area of land under cultivation.

4- Education Mission: A project to upgrade 1000 Government schools into international standards during the first phase and steadily improved the infrastructure for the education in Kerala. After the implementation of this project, Kerala became the first fully digital State in the country in the field of public education. The government schools have hi-tech classrooms as well as labs.

In a first in India, Pink Patrol, an all-woman police squad was introduced for the security and safety of women and children in public places.

2- SNC Lavalin Controversy: The Comptroller and Auditor General of India report stated that the deal Vijayan was struck in 1998 with Lavalin, a Canadian firm, for the repair of three generators, had cost the state exchequer a staggering Rs 375 crores. A CBI enquiry was ordered by the Kerala High Court into the case. The CBI special court discharged Pinarayi Vijayan and the others accused from the list of accused in the SNC-Lavalin Case and held that there's no proof of dishonest and fraudulent intentions, abuse of official position and cheating.