'Royal Bengal Tiger' became the National animal of India in 1973 after the inception of the Project Tiger in 1973. The total number of tigers in India has increased to 2967 in the year 2018. Madhya Pradesh has highest number of tigers i.e. 526 in India followed by the Karnataka with 524 tigers. 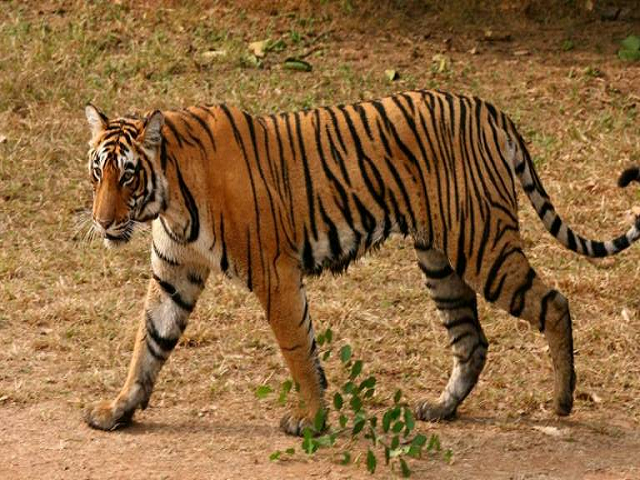 Project Tiger was started in the year 1973 in view of the dwindling tiger population in India. Since the start of this program, the number of tigers in India started increasing. 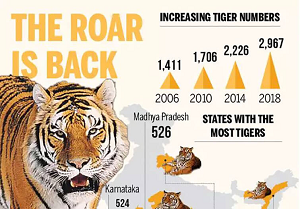 The combination of stamina, strength, agility and tremendous power has made the tiger as the national animal of India.

Some Tiger Reserves in India are- i. Tiger is called the Lord of the Jungle and displays India’s wildlife wealth.

ii. It belongs to the species of Panthera Tigris.

iv. Since 2010, it has been classified as endangered by the IUCN.

v. There are eight sub-species of tigers such as Royal Bengal, Indo-Chinese, Sumatran, Amur or Siberian, South China, Caspian, Java, and Bali. The last three have been hunted to extinction.

vi. The white tiger is a recessive mutant of the Bengal tiger, which is reported in the wild from time to time in Assam, Bengal, Bihar and especially from the former Madhya Pradesh( Rewa).

ix. Tigers have very strong legs like horses. It has been observed that a shot tiger can die standing even while bleeding to death.

x. It is observed that about half the tiger infants do not survive till adulthood. A newborn cub remains completely blind for the first week of its birth.

xi. Unlike lions, tigers do not fight over preys. Two male tigers have been seen sharing a prey. When several tigers are sharing a prey, it is observed that the male tigers wait for the females and infants to finish eating unlike any other predatory animal.

xii. An adult tiger can leap a distance of more than six metre and jump up to five metre vertically.

xiii. One blow of a tiger's front paw is strong enough to break a bear's skull and even break its spine. The condition of humans can be imagine easily now!

xiv. Each tiger has over 100 stripes on its body but no two tiger have the same stripe pattern.

xv. White tigers are not a different species. They are white in colour because some of the regular tigers are born with less pigmentary cells on their skin, making them look white.

xvi. Tigers, unlike other cat animals, like playing in water. They are excellent swimmers and fishers too. A tiger can swim for many kilometres and hunt for fish. So the steps taken up by the government has increased the number of total tigers in the country significantly. I hope that in the coming years the biodiversity wealth of India will get richer.

What is Air Quality Index and how is it calculated?