Article 370:Special Status of the Jammu and Kashmir

Article 370 in the part XXI of the constitution of India provides a special status to the state of Jammu and Kashmir. The special status provided the state with considerable autonomy and most of the decision was taken by center and in consent with the wishes of the state government, excluding external affairs, defence, communications and ancillary matters.

Main Features of the Accession
Though, envisaged to be of very temporary arrangement, it went on to define the special treatment to the state of Jammu and Kashmir as elaborated below:

1. Under the agreement, the state surrendered defence, communications and external affairs.

2. State was also provided with autonomy to draft its own constitution through its separate constituent assembly.

3. Article 370 was incorporated in Indian constitution temporarily to accommodate above features.

4. The state of J&K was specified in the category of Part B states in the original constitution (1950).

5. Laws on Union and concurrent list will be made by centre only with the consent of state of J&K

Article 1 will also be applicable.

Why Governor’s Rule is imposed in Jammu & Kashmir only?

Below mentioned are the various parameters under which special treatment to Jammu And Kashmir was provided: 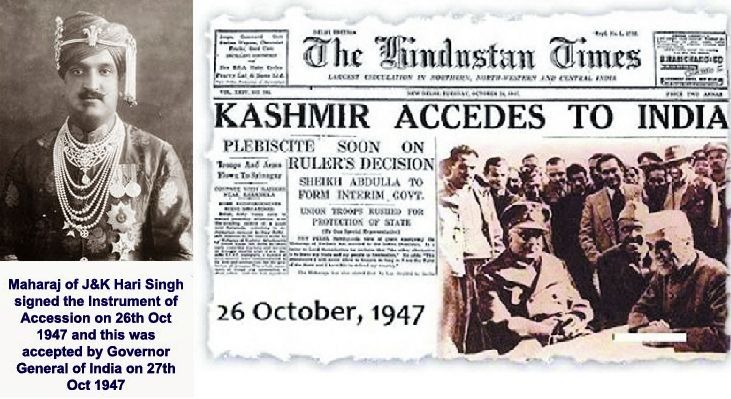 1. Its name, area or boundary cannot be changed without the consent of state legislature.

2. Part VI of Indian constitution dealing with state government is not applicable.

3. Residuary power belongs to state, except in prevention of activities involving terrorist acts, questioning and disrupting the sovereignty and territorial integrity of India and causing insult to the national flag, national anthem and the constitution of India.

4. Fundamental right to property is still granted in the state.

5. Special rights are granted to permanent residents of state with regard to public employment, acquisition of immovable property, settlement and government scholarships.

6. Directive Principles of state Policies and Fundamental duties are not applicable.

7. National emergency on the ground of internal disturbance will have no effect except with the concurrence of state government.

9. High Court of Jammu and Kashmir cannot issue writs for other than Fundamental rights.

10. The denial of citizenship rights of migrants to Pakistan is not applicable.

11. Fifth schedule and sixth schedule of Indian Constitution are not applicable.

13. An amendment made to the Constitution of India does not apply automatically to the state unless extended by Presidential Order.

14. President rule can be applied only on the ground of failure of constitutional machinery of state constitution and not of Indian constitution.

15. Consent of State legislature is also imperative in case of international treaties or agreements.

Thus, the relation between Jammu and Kashmir and India must be harmonized at the earliest in order for India to attain glory. It cannot bear the brunt of boiling Kashmir if it wants to develop and prosper in the contemporary world. The panacea lies in addressing the aspirations of all the stake holders on priority basis without compromising the integrity and security of India. India will develop if all its organs and its geography develop.

What were the reasons behind India-Pakistan War and its effects?

What are the demands of Kashmiri from Government of India