The Uttar Pradesh Prohibition of Unlawful Religious Conversion Law, 2020 is a law enacted by the Government of Uttar Pradesh, India to prohibit unlawful conversion from one religion to another by misinterpretation, force, undue influence, coercion, allurement or by any fraudulent means or by marriage. 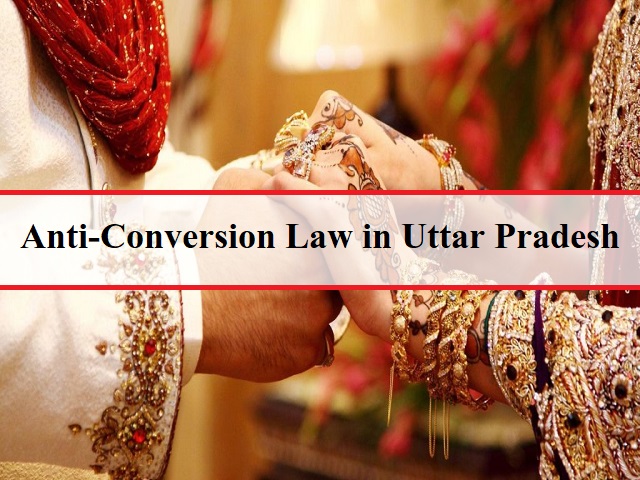 2- Aim: To provide for the prohibition of unlawful conversion from one religion to another by misinterpretation, force, undue influence, coercion, allurement or by any fraudulent means or by marriage.

i) Allurement- Temptation in the form of a gift, gratification, easy money or material benefit, employment, free education in any reputed school run by any religious body, better lifestyle, divine displeasure and so on.

ii) Coercion- To compel an individual to act against his/her will, using psychological pressure or physical force causing bodily injury or threat.

iii) Conversion- To renounce one's own religion to adopt another religion.

iv) Force- To threat someone in any way.

v) Fraudulent means- Impersonation of any kind-- false name, religion, surname and so on.

viii) Religion- Any organised way of worship pattern, faith, belief, lifestyle prevailing in any part of India and defined under any law or custom for the time being in force.

ix) Religion convertor- Person of any religion who performs any act of conversion from one religion to another such as Father, Maulvi, Karmkandi, etc.

X) Undue influence- Unconscientious use of power or influence by one person over another to persuade the other to act in accordance with the will of the person exercising such influence.

xi) Unlawful conversion- Conversion which is not in accordance with law of the land.

4- Prohibition of Conversion from one religion to another: The law prohibits every person to convert or attempt to convert another person from his own religion to another by use or practise of misinterpretation, force, undue influence, allurement, marriage or by any fraudulent means and no one should abet, convince or conspire the said conversion.

It is to be noted that any person who reconverts to his/her immediate previous religion, it is not deemed to be a conversion under this law.

5- First Information Report: Any aggrieved person and the people related to the person by blood, marriage or adoption have the right to lodge an FIR against the said conversion.

i) Imprisonment- Whosoever contravenes this law will face at least one-year imprisonment which may be extended to five years.

Whosoever contravenes this law with reference to minor, woman or people belonging to SC or ST tribe, will face at least two years jail term which may be extended to ten years.

Whosoever contravenes this law with reference to mass conversion, will face at least three years jail term which may be extended to ten years.

ii) Fine- People carrying out the prohibited conversion will be liable to pay Rs. 15,000 fine.

Whosoever contravenes this law with reference to minor, woman or people belonging to SC or ST tribe, will be liable to pay Rs. 25,000 fine.

Whosoever contravenes this law with reference to mass conversion, will be liable to pay Rs. 50,000 fine.

i) Any person who wishes to convert to another religion shall declare (in the form prescribed in Schedule-I at least sixty days in advance) that the conversion is with his/her free consent and without any force, coercion, undue influence or allurement.

ii) The religious convertor shall inform at least one month in advance about such conversion (in the form prescribed in Schedule-II).

Upon receiving the information, the said officer will conduct an enquiry to real intention, purpose and cause of the proposed religious conversion. If the proposed conversion contradicts the provisions of this law, it would be illegal and void.

iii) The person who contradicts the provisions of subsection (i) will face a minimum of 6 months jail term which may be extended to three years along with a fine not less than Rs. 10,000.

The person who contradicts the provisions of subsection (ii) will face a minimum of 6 months jail term which may be extended to three years along with a fine not less than Rs. 25,000.

i) The converted person shall send a declaration (in the form prescribed in Schedule-III) within sixty days of the conversion to the DM of the district in which the person resides.

ii) The converted person shall appear before the DM of the district within 21 days of filing the declaration to establish his/ her identity and to confirm the contents of the declaration.

11- Parties to offence: If an offence is committed under this law, the below-mentioned parties will be guilty of the offence and will be charged as if he actually committed the said offence.

(a) Whosoever actually commits the crime.

(b)  Every person who does or omits to do any act to enable or aid another person to commit the offence.

(c) Any person who guides, convinces or procures any other person to commit the offence.

12- Burden of Proof: The burden of proof as to whether a religious conversion was effected through misrepresentation, force, undue influence, coercion, allurement or by any fraudulent means or by marriage, lies on the person who has caused the conversion and, where such conversion has been facilitated by any person, on such other person.

During British Raj, some of the Indian princely states such as Kota, Patna, Surguja, Udaipur and Kalahandi passed laws against religious conversions in an attempt to preserve Hindu religious identity in the face of British missionaries. These laws are as follows:

In 2019, the Uttar Pradesh State Law Commission under Justice Aditya Nath Mittal compiled a report on unlawful religious conversions and proposed a draft titled 'to provide freedom of religion by the prohibition of conversion from one religion to another by misrepresentation, force, undue influence, coercion, allurement or by any fraudulent means or by marriage and for the matters connected therewith or incidental thereto'.

Supreme Court on Marriage and Conversion:

1- The Apex Court of India in its several judgements has held that faith, the state and the courts have no jurisdiction over an adult’s absolute right to choose a life partner.

2- Intimacies of marriage lie within a core zone of privacy, which is inviolable and the choice of a life partner, whether by marriage or outside it, is part of an individual's 'personhood and identity'.

3- India is a 'free and democratic country' and any interference by the State in an adult’s right to love and marry has a 'chilling effect' on freedoms.

4- The absolute right of an individual to choose a life partner is not in the least affected by matters of faith.

In the 2014 judgement, Allahabad High Court stated that if conversion "is resorted to merely with the object of creating a ground for some claim of right" it would be "a fraud upon the law". This judgement was quoted by UP's Chief Minister Yogi Adityanath as one of the bases for the new law. However, the Allahabad HC later commented on the same judgement and overrode it, stating that it was "not a good law".

21-year-old Uwaish Ahmed was arrested in Barailley against unlawful conversion in Uttar Pradesh. An FIR was lodged against him by Tikaram Rathore (a resident of Sharifnagar village) in Deorania Police Station on charges of allegedly trying to coerce a 20-year-old Hindu woman to convert her to his religion and marry him, The Hindu reported.

Mr. Tikaram alleged that the accused had developed a friendship with his daughter during their education and wanted to 'coerce, coax and allure her into converting'.

Farm Laws 2020: Everything you need to know about the new agriculture reforms in India

On 31 October 2020, UP's Chief Minister Yogi Adityanath announced that his government will pass a law to curb 'Love Jihad'. The law is known as 'The Uttar Pradesh Prohibition of Unlawful Religious Conversion law, 2020'.

What are the laws related to 'Anti-conversion Law' of UP?

What is Uttar Pradesh's Anti-Conversion Law?

The Uttar Pradesh Prohibition of Unlawful Religious Conversion Law, 2020 is a law enacted by the Government of Uttar Pradesh, India to prohibit unlawful conversion from one religion to another by misinterpretation, force, undue influence, coercion, allurement or by any fraudulent means or by marriage.
Comment ()