Amarnath Yatra every year begins in the month of July according to the Shravan month in Hindu calendar. This is the only time in the whole year when Lord Shiva appears on the earth in the unique form of an ice Lingam. Millions of devotees trek through the daunting mountains to Amarnath ji Shrine in South Kashmir. There are many interesting and attractive stories related to the Amarnath cave. Let us find out 10 interesting facts about Amarnath Yatra, routes, dates and story related to Amarnath shrine. 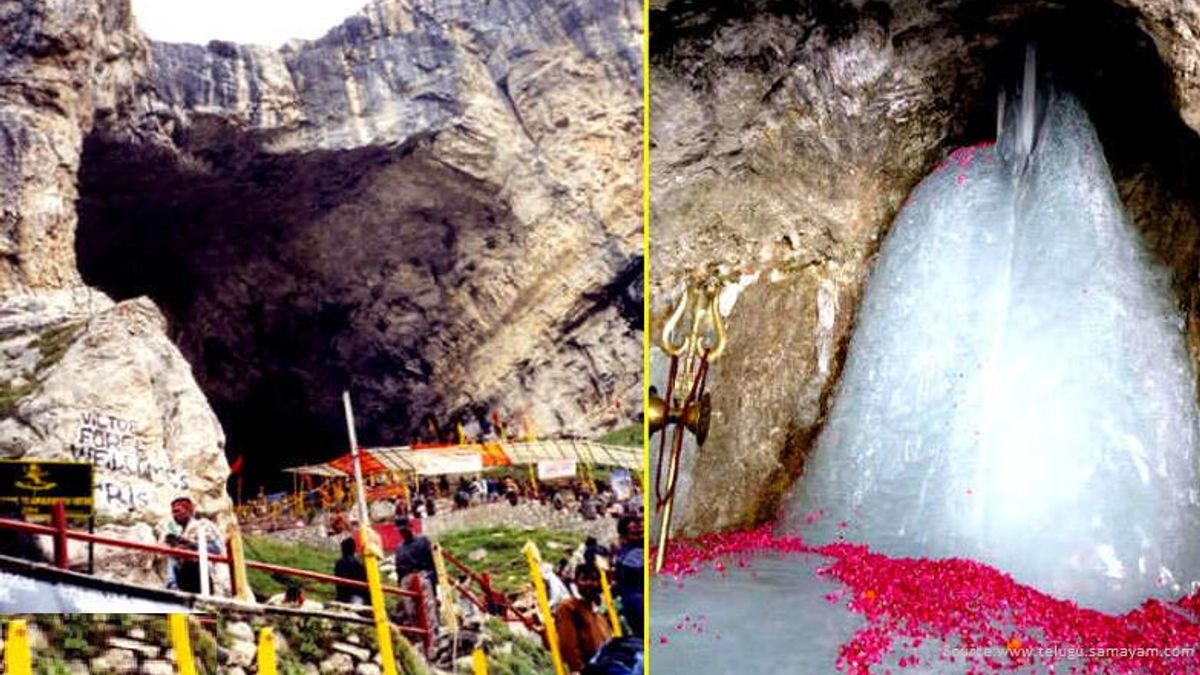 Amarnath cave is one of the main religious places of Lord Shiva. Every year thousand of devotees from all around the world come to visit Lord Shiva here. The Shivalinga made of ice in the cave is about 10-12 feet high and is the symbol of people’s faith and trust. At Amarnath Yatra that is while reaching the temple which is located high in the snow capped mountains devotees faces extremely difficult rough weather and terrain and shows their undying devotion for Lord Shiva.

Do you know that Amarnath shrine is located in the Himalayan region of South Kashmir? It is about 141 km from Srinagar and is situated at an altitude of 3,888 meters (12,756 feet). There are two routes through which we can reach the Amarnath shrine that is via Pahalgam and Baltal. Pahalgam is about 92 km from Srinagar and about 93 km from Baltal. After reaching Pahalgam or Baltal, further travel has to be done with the help of foot or by horse mule.

The Amarnath Yatra began early Sunday (30 June, 2019) morning with Jammu and Kashmir governor's advise K.K.Sharma flagging off from the Yatra Niwas camp in Jammu the first convoy of 93 vehicles carrying 2,234 pilgrims. The Amarnath Yatra will conclude on 15 August, coinciding with Raksha Bandhan.

There are several interesting and mesmerizing stories related to the Amarnath cave. So, let us see 10 interesting and astonishing facts about Amarnath Yatra, routes, dates and its registration process in detail:

1. The length of the Amarnath cave (inward depth) is 19 meters and the width is 16 meters. This cave is spread over an area of approximately 150 feet and is about 11 meters high. The significance of this cave was not only by the creation of natural Shivalinga but also here Lord Shiva told the story of immortality to Goddess Parvathi. Therefore, it is believed that Lord Shiva remains in the Amarnath cave. Goddess Parvathi Peeth is located in the cave and is one of the 51 Shakti Peetas. It is also believed that Bhagwati Sati's throat/neck fell here near Pahalgam.

2. Do you know that in Kashmir there are 45 Shiva Dham, 60 Vishnu Dham, 3 Brahma Dham, 22 Shakti Dham, 700 Naga Dham and innumerable pilgrimages, but Amarnath Dham is the most important. According to the Purana, ten times as per Linga Darshan and Pooja in Kashi, hundred times from Prayag and thousand times more than Naimisharanya are considered as Amarnath Darshan. Even we got the references about this from Braungesh Sahita, Nilamata Purana, Kalhhan's Rajatarangini etc. In Kalhan's 'Rajatarangini', there is a saga the ruler of Kashmir. He was a great devotee of Shiva who used to worship the Shivalinga of snow in the forests. Let us tell you that the Shivalinga of ice is not available anywhere in the world except in Kashmir.

3. The most surprising thing is that the Amarnath cave is the houses of a natural lingam made up of snow. The lingam waxes and wanes with the lunar cycle and this is considered a miracle of nature and the power of Lord Shiva. The cave also has two more ice lingams, each one representing Goddess Parvati and Lord Ganesha. It is believed that the cave is nearly 5000 years old. The lingam here is called swayambhu lingam as it is said to have appeared here on its own.

It is believed that this cave was discovered by a shepherd named Buta Malik, who met the saint here. The saint gave him a bag of coal. When he reached home, he was very surprised because the coal was converted into gold coins. When Buta went back to thank the saint, he found the shrine of Amarnath over there.

5. The story of Amarnath cave

According to the scriptures, Lord Shiva told the story of immortality to Goddess Parvati after insisting his wife Parvathi to reveal the secret of immortality. Then, Lord Shiva decided to proceed towards the cave because the problem of telling the story of Amarkatha was that no other living being should hear the story. But pigeon's egg was there in the cave and it is said that the pair of pigeons born from the egg had become immortal and can be seen in the cave even now.

But while going to the cave Lord Shiva did few things which were great according to his devotees. Because of these few things, the entire way to the cave became blissful.

Now, let us study about the Amarnath Yatra that is what all things were done by the Lord Shiva on the way to the cave.

6. According to the mythology, Lord Shiva took the Pahalgam route to reach the cave.

When Lord Shiva took Parvati to the cave to tell the story of Amarkatha, he first left Nandi, his vahana at this place which later called as Pahalgam. It is 92 kilometres from Srinagar and is surrounded by mountain peaks.

Chandanbadi
The next place after Pahalgam is Chandanbadi. It is 16 kms away from Pahalgam. According to beliefs, Lord Shiva did a very unique thing here. This place is also known as Chandramoli because Lord Shiva sacrificed the moon from his head here. The moon then waited for the Lord Shiva to return here. That is why the name of this place became Chandanbadi.

Pissu Top is slightly ahead of Chandanbadi. The importance of this place is related to Amarnath's philosophy. According to this, for Darshan of Amarnath, there was a huge fight between the Gods and demons. At that time with the help of Lord Shiva, the gods i.e. Devas defeated the demons. A mountain was formed with the dead bodies of the demons. Since then this place is known as Pissu Top.

The next destination after the Pissu top is Sheshnag. Lord Shiva had dropped the snake from his neck here. There is a lake of blue water, which proves that this is the place of Sheshnag. It is 12 kms away from Chandanbadi.

Why Makar Sankranti is celebrated?

This place is about 4 to 5 kilometers from Sheshnag. It is at an altitude of 14,000 feet. It is believed that Lord Shiva had left his beloved son Ganesha here. There are many waterfalls and beautiful scenes at this place.

This is the final destination of the journey. Amarnath cave is located at an altitude of 13,500 feet. The 3 km route to the cave is covered with snow. After crossing the river of ice, the cave can finally be seen. The cave is about 100 feet long and 150 feet wide. In this Cave, the Shivalinga is formed of natural ice and here only Lord Shiva told Goddess Parvati the secret of immortality.

10. Along with Shivalinga in Amarnath cave, two more ice lingams are formed, each one representing Goddess Parvati and Lord Ganesha. Every year the devotees visit Amarnath for the entire month of Sawan from Aashadh Purnima till Raksha Bandhan. According to the legends, Lord Shiva himself visits in the Amarnath cave on the full moon day of Raksha Bandhan. The responsibility of management of Amarnath Yatra has been taken by the Amarnath Shrine Board, which provides all kinds of facilities to the pilgrims on their way to Amarnath Cave.

No one below the age of 13 years or above the age of 75 years and no lady with more than six week’s pregnancy shall be Registered for the Yatra.

Every Yatri has to submit Application Form along with Compulsory Health Certificate (CHC) to obtain Yatra Permit for the Yatra. The List of Authorised Institutions / Doctors for issuing Compulsory Health Certificates (CHC) for Shri Amarnath Yatra is constantly updated and made available online and the application form and CHC is free of cost available to teh applicant yatri.

For the Yatra Permit, the Applicant-Yatri has to submit the fommowing documents to the Registration officer:

So these are the 10 interesting facts related to the Amarnath cave and Amarnath Yatra with some attractive stories of Lord Shiva.