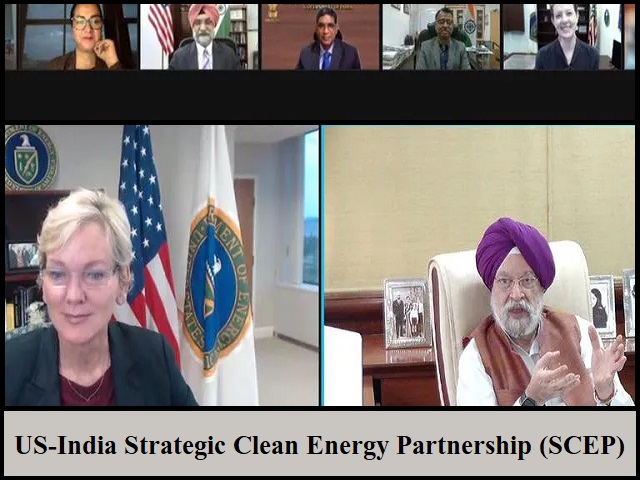 On 9 September 2021, the revamped U.S. - India Strategic Clean Energy Partnership (SCEP) was launched during a virtual ministerial meeting held between India's Petroleum and Natural Gas Ministry and the U.S. Ministry of Energy.

The SCEP is in line with the U.S. - India Climate and Clean Energy Agenda 2030 Partnership announced by both countries at the Leaders’ Summit on Climate held in April 2021.

2- The two sides reviewed the progress, major accomplishments and highlighted new areas for cooperation across the aforementioned pillars.

3- A new India-U.S. Task Force on Biofuels was announced to further the scope of work on cooperation in the biofuels sector.

4- Both sides agreed to expand the scope of the work to include smart grid and grid storage as part of the second phase of the Partnership to Advance Clean Energy (PACE)-R initiative anchored on the Indian side by the Ministry of Science and Technology.

5- The meeting also checked the progress of the India-U.S. Civil Nuclear Energy Cooperation.

Significance of the revamped partnership

It will intensify the efforts and take advantage of the complementarities that exist between the U.S. and India such as advanced technologies of the U.S. and rapidly growing India’s energy sector, through a cleaner energy route with low carbon pathways.

2- Under this Task Force, the two sides agreed to continue to develop better understandings of methane abatement.

1- Six task forces have been constituted to carry out research and modelling in different areas.

2- Joint Committees have also been set up to deliberate on Energy Data Management, Low Carbon Technologies and Just Transition in the Coal Sector.

"Both sides will strengthen the electric grid in India to support large-scale integration of renewables, including through smart grids, energy storage, flexible resources, and distributed energy resources, and ensure reliable and resilient grid operations, as well as promoting energy efficiency and conservation measures," as per a statement from the Ministry of Petroleum and Natural Gas.

Women’s Reservation Bill: 25 years on, the bill awaits a nod