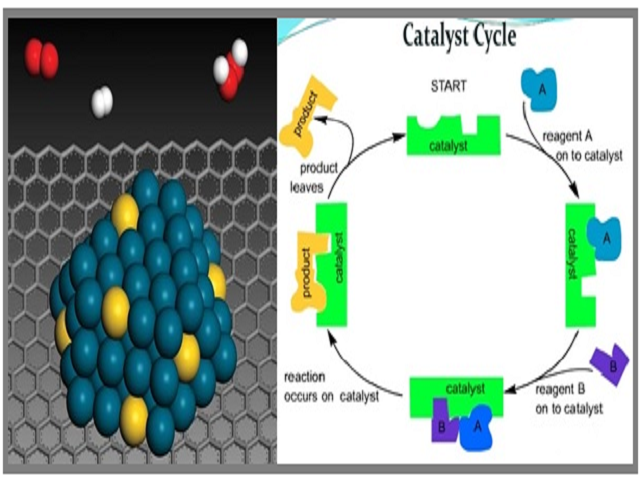 Jons Jacob Berzelius discovered the chemical phenomena of catalysis in 1835 and he confirmed that the rate of reaction can be affected by the presence of any chemical substance.

Example: If KClO3 be heated at extremely high temperature, the released oxygen gas emerges very slowly, but if in small amount MnO2 be mixed up then even at moderate temperature oxygen gas is released fastly.

There are various types of catalyst but usually, there are four types which are significant and important-

(iii) Auto catalyst: When any product forms during any chemical- reaction act like the catalyst for the same chemical reaction then it is called an auto catalyst. The compressed condensed nitrogenous substance found to be in microbes or microorganism through which the process of fermentation is performed is called an enzyme. This is present in the cells of every living creature and it is responsible and fully accountable for the various metabolic activities taking place in the living beings.

Enzymes are sometimes called biochemical catalysts. Thus enzymes are condensed substances like protein and these act like contact catalysts and provoke the decomposition process to complex high organic substances into a simpler substance. The enzymes are very exclusive and they perform a single activity of the time. The activities of enzymes are abruptly diminished or vanished in the presence of any toxic substance at high temperature. At ordinary temperature enzyme functions optimally.

List of some common man-made Polymers and their Uses