What is congenital blindness and schizophrenia? 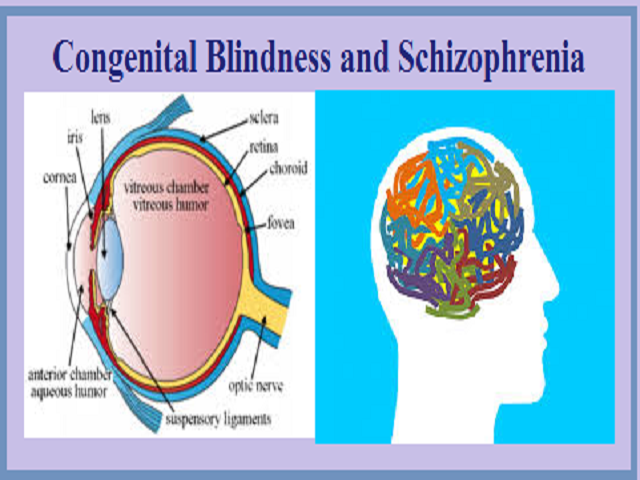 Blindness is a state in which a person not able to see or lacks vision. Or we can say that blindness is a loss of vision that cannot be corrected with glasses or contact lenses. We can't ignore that blindness, congenital, early or late is a significant problem in the whole world. Blindness may be caused due to genetic mutations, birth defects, premature birth, nutritional deficiencies, infections, injuries, etc.

In this article, we will study about congenital blindness and schizophrenia.

What is congenital blindness?

Congenital blindness is a group of diseases and conditions occurred in childhood or early adolescence (below 16 years), if left untreated may result into blindness or severe visual impairment that further result into permanent blindness later in life.

It has been seen that more than 60% cases of blindness among infants are occurred due to inherited eye diseases like congenital (present at birth), cataract, congenital glaucoma, retinal degeneration, optic atrophy, and eye malformations.

Do you know how human brain works?

Schizophrenia is a chronic brain disorder or mental disorder that usually appears in late adolescence or early adulthood. It can lead to delusions, hallucinations, and other cognitive difficulties. This disease can be a lifelong struggle. Commonly it strikes person in between the ages of 16 and 30. In males, symptoms appear slightly at a younger age than females. In various cases, defects or disorders develop slowly and a person not able to distinguish it for many years. In some cases, it also strikes suddenly and develops quickly.

How researchers are trying to find out that congenital blindness appears to offer protection against schizophrenia?

No person who was born blind has ever been diagnosed with schizophrenia which is surprising as congenital blindness may result from infections, brain trauma, or genetic mutation. These are the factors that are independently associated with a greater risk of psychotic disorders.

According to a researcher Pollak “Vision gives us a lot of information about the world around us, and is an important sense that helps link together with other sensory cues, like sound and touch”.

If a person sees the world is off then it will be difficult to predict, correct errors and build a model of the world. And when people have a problem with vision, the brain makes more predictions to explain them. That is if a person not able to see anything, then he or she would not be able to build up those false representations of the world around and later on may lead to the problems in thinking.

Researcher Pollak told that they are trying to find out that there must be something different in the representation and the stability of the internal world in congenitally blind people. Further, he stated, “this stability, in a way, is keeping itself protective against the kind of mistakes and false interferences that you get in schizophrenia and psychotic disorders".

Therefore people born blind are mysteriously protected from schizophrenia. Research for this is still going on.