A sinking fund is a kind of fund in which an amount is deposited at regular intervals that can be used to repay the debt in the future. It is called Debt Remittance Fund. There are only 23 states in India have created a sinking fund. Read this article to know the meaning, objectives, and example of a sinking fund.

What is the Sinking Fund?

A sinking fund is a kind of fund in which a fixed amount is deposited at a regular interval. So the sinking fund is like a recurring deposit. After some years this fund turns into a huge collection of funds that are further used to repay the previous debt taken by the government or a company.

It is also called Debt Remittance Fund because the amount deposited in it is used to repay the debt in the future and the government or company does not have to suffer much in repaying the loan in the maturity year of the loan. This is also like a recurring deposit account in the bank.

The 12th Finance Commission (2005-10) had recommended the creation of a sinking fund. This fund is separate from the Consolidated Fund of State and Public Accounts. This Finance Commission also said that the money deposited in it should be used only to repay the debt of the state government and it is not for any other purpose.

What are the Objectives of a Sinking Fund?

If we talk in the context of a state government, a sinking fund is made so that after the full tenure of the old government, the financial burden could be reduced for the new government.

As we know that governments keep changing in a democracy, if the incumbent government incurs too much debt on itself, then the responsibility of its repayment will fall on the new government to be formed in the future.

Therefore, every state government deposits 1% to 3% of its total debt in a consolidated sinking fund to repay the due loan / due bond payment on maturity date in the future and the government has not declared a defaulter.

If, for example, the government of Uttar Pradesh issued Rs 200 crore bonds for a period of ten years (2020 to 2030). This means that the government will have to pay 200 crore rupees to these bondholders in 2030 (interest is not taken into consideration for convenience).

Thus it is clear that with the help of this consolidated sinking fund, the state government has fulfilled its responsibility without any hassle.

Reserve Bank relaxation to states regarding the Sinking Fund:- 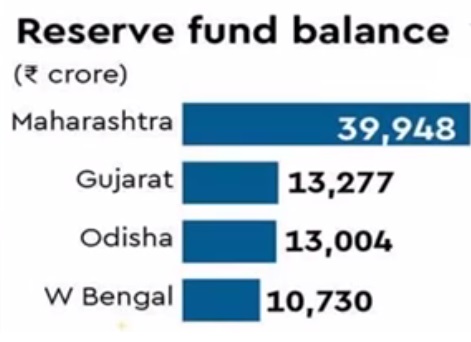 Now due to Coronavirus outbreak states do not have funds to repay their old debts. So these states have urged the RBI to raise 13,300 Crores or 45% of their debt from this sinking fund. The RBI has granted this facility to states only till 31 March 2021.

The states that have accumulated the most money in this sinking fund will be the biggest beneficiary of this relaxation. See in the table below that out of the total Rs1.30 lakh crore, Maharashtra has deposited Rs 39,948 crore alone. This means Maharashtra will get the most benefit from this relaxation.

Hopefully, after reading this article, you must have understood what is a sinking fund and how it is used by the states to repay its old debt?

How Much debt on the Indian Government?