How Much debt on Indian Government?

The status report on Government debt for 2018-19 states that the total public debt of the country has increased to 68.6% of GDP by March 2019, which in simple terms has gone up to Rs.13 trillion or Rs. 1.3 crores. Read this article to know the exact amount of debt on the Indian government from 2014 to 2019.

Today there is hardly any country in the world that has not taken loans (internal or external loan) to run its country. Actually, the main reason behind this is that the main objective of the government is to increase the welfare of the citizens of the country.

The government of India can take loans from both inside and outside the country.

1. Internal loan:- The loan which is taken within the country itself, is called an internal loan. This loan is taken from commercial banks, insurance companies, Reserve Bank of India, corporate houses, and mutual fund companies etc.

The Department of Economic Affairs of the Ministry of Finance released a report in April 2020 titled; Status Report on Government Debt for 2018-19. It has been reported in this report that the total public debt of the country has increased to 68.6% of the gross domestic product by March 2019, in other words, it is Rs.13 trillion or Rs. 1.3 crores.

The formula for calculating for this deficit is as follows;

Keep in mind that this loan of the Government of India also includes the loan taken by the state governments in India.

Debt on the Indian Government is as follows;

How much debt on India during the Modi government since 2014?

It means; since the Narendra Modi has taken oath as the Prime Minister of India; external debt on the country has been increased by 118 billion dollars.

An increase in the external debt is not a good sign because the county needs to repay this debt in foreign currency, i.e. dollars and other foreign currencies.

Having internal debt over the country is not as dangerous as foreign debt. That is why; the Government of India raises about 80% of its total debt within the country with the help of the Reserve Bank and the governments of the Indian states have taken about 94% of their total debt from internal sources.

The biggest sources of internal loans to the Government of India are commercial banks (40% of the total internal debt), 24% by insurance companies, and 15% by the Reserve Bank of India. 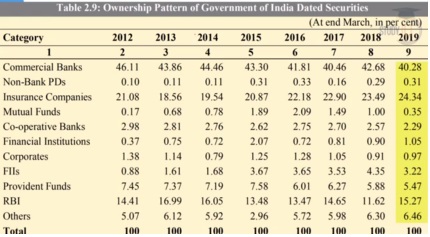 What is the comfortable limit of Debt:-

According to the World Bank estimates, countries that have external debt more than 77% of its GDP faces problems in the long run. If the external debt increases one more percent after the limit of 77% of GDP; it reduces the GDP growth rate of that country by 1.7%.

Hopefully, after reading this article, you must have understood how much foreign debt is taken by India, and what is the safe limit of external debt?

To read such more interesting articles click on the link given below;