The Nord Stream gas pipelines 1 and 2, which have been the cause of geopolitical tensions between Russia and Germany, reported unexpected gas leaks on Tuesday, September 27, 2022.

The Nord Stream gas pipelines 1 and 2, which have been the cause of geopolitical tensions between Russia and Germany, reported unexpected gas leaks on Tuesday, September 27, 2022. Denmark’s troops have released a video which shows bubbles racing to the surface of the Baltic Sea above the pipes as a result of the gas leak that has generated a surface disturbance of over one thousand meters in diameter.

The official investigation by European Nations is underway, as there are suspicions that the gas leak was “deliberate” and “an act of sabotage.”

Read on to find out where the Nord Stream Gas Pipelines are located. What is their geo-political significance? And how did the leak happen?

Where Are The Nord Stream Gas Pipelines Located?

The Nord Stream Pipelines 1 and 2 are two underwater natural gas pipelines beneath the Baltic Sea in Europe that link Germany with Russia. The Nord Stream 1 pipeline travels toward Finland from Vyborg, which is in northwest Russia. It then crosses the Gulf of Finland and runs along the Baltic Sea to the German seaport of Lubmin. It was the longest subsea pipeline in the world that provides natural gas until its length was surpassed by Nord Stream 2. Russia met around 40% of the natural gas demands of the European Nations and the EU in 2021 using this pipeline.

For visual reference, below is a graphic representation of the location of the Nord Stream pipeline 1. 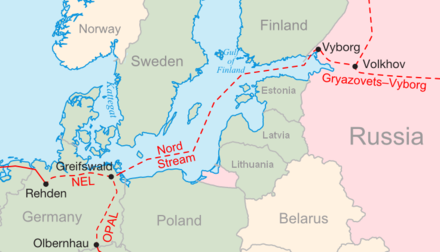 The Nord Stream 2 pipeline was finished in 2021 by Germany. It runs parallel to the Nord Stream pipeline 1. It originates at Ust-Luga, which is close to Estonia in northwest Russia. It is the longest subsea pipeline in the world that provides natural gas. It is 1,234 kilometres long. The European section of the pipeline starts in northwestern Russia, just outside the Baltic Sea port city of Ust-Luga.

For visual reference, below is a graphic representation of the location of the Nord Stream pipeline 2.

Russian state-owned enterprise Gazprom is the largest stakeholder in Nord Stream AG, which owns and manages Nord Stream 1. The proprietor and manager of Nord Stream 2 are Nord Stream 2 AG, a subsidiary of Gazprom. With Nord Stream's combined capacity from Nord Stream 1 and 2, around 110 billion m3 of gas is estimated to be produced annually.

What Is The Significance of The Nord Stream Pipelines 1 And 2?

Nord Stream 1 and 2, which are between Russia and Germany under the Baltic Sea, have been controversial for more than ten years, starting with the construction of Nord Stream 1 in 2011 by the two nations.

Germany is Europe's largest economy, and its energy prices are amongst the lowest. Due to the inexpensive gas supplies provided by Nord Stream 1, this has been made practical. Additionally, this increases the competitiveness of German-made items in the global market. Germany's economy could be in danger if anything happens to the pipelines. For political, economic, and security reasons, many see this pipeline as a tool of Russian dominance and fear that it strengthens Putin's hand.

Germany built Nord Stream 2 to double the imports of natural gas from Russia so it could address the demands of its citizens better. However, the Russo-Ukrainian war put a halt to things, and Germany halted the usage of Nord Stream 2.

Because of the war, Russia has been using energy as a weapon, and since then, its supplies have been running low. Now, Germany has been heavily dependent on imports of energy from Russia to satisfy its energy demands. Because of the war and the halted supply of energy, it is under extreme stress.

Following a significant reduction in pressure in the two pipes, the Nord Stream gas pipelines 1 and 2 reported unexpected gas leaks on September 27, 2022, a Wednesday. In a video that was made public by Danish forces, bubbles can be seen racing to the surface of the Baltic Sea above the pipelines as a result of the gas leak, which has caused a surface disturbance with a diameter of more than a thousand meters. The cause of the leaks is still unknown.

Analysts and experts are saying that leaks of this nature are extremely uncommon. They are not likely to take place accidentally. For now, technical problems, poor maintenance, or even sabotage are being considered as potential reasons for the leak. An official investigation by the European Union is underway.

Allegations of the leaks being an “act of sabotage” by Russia are also being made. However, there is no concrete evidence regarding the allegations.

According to the U.S. Secretary of State Antony Blinken, preliminary assessments of the damage to the Nord stream pipelines 1 and 2 appear to point to sabotage to affect the energy stability of Europe.

Russia, in a recent development, has said that it is deeply disturbed by the news of the Nord Stream pipeline leak.

How Will The Nord Stream Pipelines Impact The World?

The Nord Stream pipeline 1 and 2 leaks could have severe consequences on the environment. There is a danger of combustion, as the leaking gas could ignite over the water. If any vessel enters the region where the leaks have occurred, it might lose propulsion.

The escape of the greenhouse gas methane would have a negative influence on the climate, but the leak would only have an impact on the ecosystem nearby.

What is the diameter of the Nord Stream pipeline?

The pipelines have an internal diameter of 1.153 meters.

How much gas is leaking from Nord Stream?

The leaks are releasing an estimate of more than 500 metric tons of methane per hour, as per the reports.

Where is the Nord Stream leak?

In the Baltic Sea near Denmark.

Official causes are still unknown, but the EU is suspecting Russia of deliberate sabotage.
Get the latest General Knowledge and Current Affairs from all over India and world for all competitive exams.