Why Speed and Velocity are not always equal in magnitude? 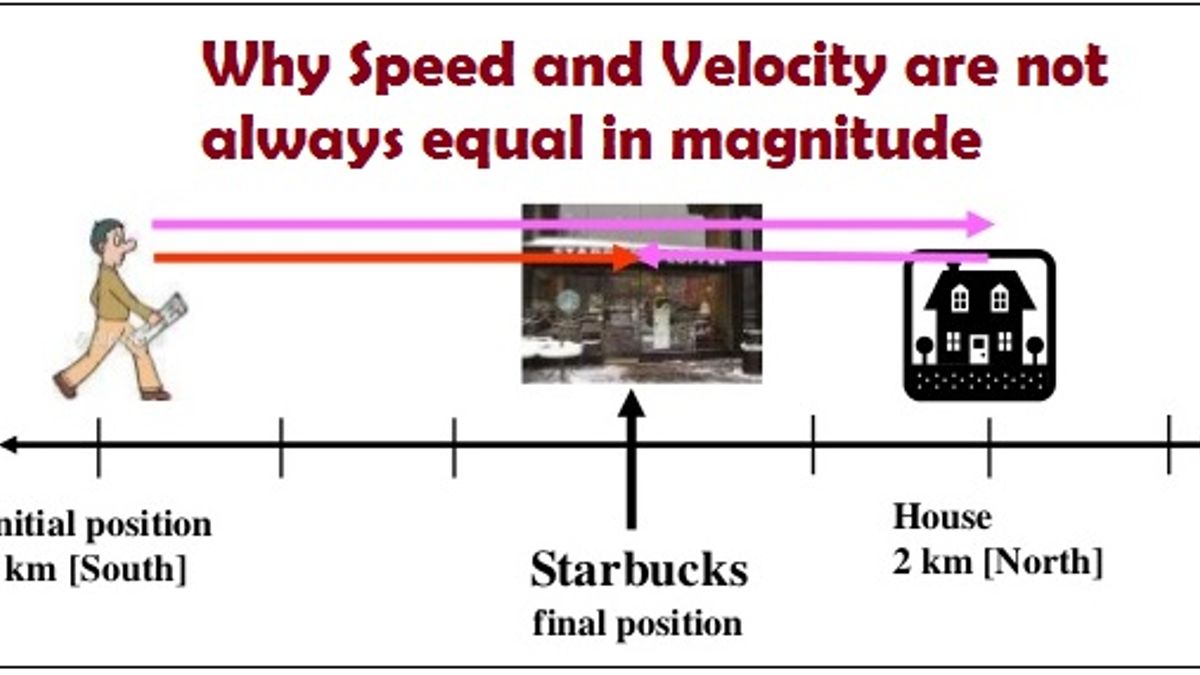 Why Speed and Velocity are not always equal in magnitude

This will be clearer with the help of an example. Suppose a boy runs a distance of 200 metres in 100 seconds in going from his home to a shop in the East direction in a straight line.
We can calculate the speed of boy i.e. = Distance travelled/Time taken
= 200m/100s = 2m/s
It is important to note here is that the boy runs in a straight line path or in a specified direction, therefore, the displacement will be equal in magnitude to the distance travelled. The displacement will actually be 200m towards East.
Thus, the velocity of boy can be calculated as: Displacement/Time taken
= 200 m towards East/ 100s
= 2m/s towards East
In this case the magnitude or size of speed and velocity of the boy is equal i.e. 2m/s.
Note: The magnitude of speed and velocity of a moving body is equal only if the body moves in a single straight line.

What is the difference between Uniform and Non-Uniform Motion?
But if a body does not move in a single straight line, then the speed and velocity of the body are not equal.
For more clarity we will see an example: Suppose the boy first runs a distance of 200 metres in 100 seconds in going from his home to the shop in East direction, and then runs a distance of 200 metres again in 100 seconds in the reverse direction from the shop to reach back home. 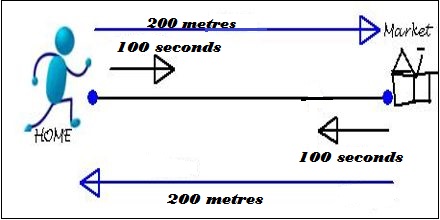 Now, the total distance travelled is 200m+200m = 400m and total time taken is 100s+100s=200s.
Therefore, Speed of boy = Distance travelled/ Time taken
= 400m/200s = 2 m/s
The boy runs 200 m towards East and then 200 m in opposite direction i.e. towards West and reaches at the starting point at home itself. So, the displacement which is distance travelled in a given direction will be 200m – 200m = 0. And the total time 100s +100s = 200s
So, the velocity of the boy = Displacement/ Time taken
= 0m/200s = 0m/s
This means that when a boy first runs at a distance of 200 metres towards East in 100 seconds and then changes the direction and runs the same distance but in reverse direction i.e. towards West in same time, then, his average speed is 2m/s but his average velocity is 0 m/s. So, in this case the magnitude of speed and velocity of the boy is not equal. This happened because boy does not move in a single straight line. He has changed the direction of motion after reaching the shop.
Thus, we can conclude that the average speed of a moving body can never be zero, but the average velocity of a moving body can be zero.