CBSE Term 2 Board Exam 2022: Board Issues Notice Regarding Fake News About Major Changes in Exam Pattern

CBSE Term 2 Board Exam 2022 date sheet is expected to be released soon. Amid speculations on the CBSE 10th, 12th exam pattern, the Board has issued a Public Advisory, warning everyone of misleading news. Get details here 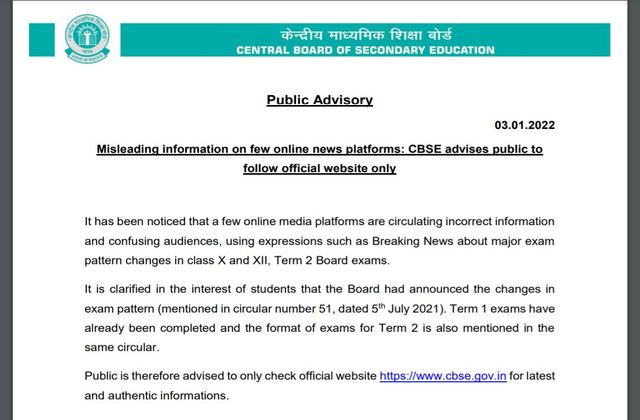 CBSE Term 2 Board Exam 2022: As per the updates, the Central Board of Secondary Education (CBSE) has released a public advisory warning everyone of misleading news. As per the notice released, the CBSE has warned students against fake news about major exam pattern changes in CBSE Class 10 and 12 term 2 board exams.

The CBSE clarified that there are no new changes in CBSE term 2 exams and that the board will follow the pattern announced on 5th July 2021. The Board has asked everyone to only consult the official website - cbse.gov.in.

The official notice reads, "It has been noticed that a few online media platforms are circulating incorrect information and confusing audiences, using expressions such as Breaking News about major exam pattern changes in class X and XII, Term 2 Board exams."

The notice further reads, "It is clarified in the interest of students that the Board had announced the changes in exam pattern (mentioned in circular number 51, dated 5th July 2021). Term 1 exams have already been completed and the format of exams for Term 2 is also mentioned in the same circular."

Several online media platforms have started publishing expected dates for CBSE Term 2 date sheet. Taking into account the newly issued Public Advisory, students and stakeholders are informed that CBSE has not released any information on board exam dates and syllabus.

This is not the first time CBSE has issued a circular on fake and misleading news. On 14th December, the CBSE warned students against fake news claiming that the board will award up to six as grace marks due to the error in CBSE Class 12 accountancy exam conducted on 13th December. On 9th September, CBSE had clarified that the rumour that the board is sending questions papers for Class 9 and 11to schools is fake.

CBSE Term 2 Board Exams 2022 for classes 10, 12 are scheduled to be conducted in March-April 2022. Expressing its concern over fake information circulating online related to class 10, 12 syllabus, exam dates and results, CBSE has said that all such information is being circulated only to mislead audiences.

Also Read: CBSE Term 2 Board Exam Date Sheet for Class 10th, 12th To Be Released Soon, Know How To Download