Have a look on the discussion over the important points for the CBSE Class 12 Biology chapter 3, Human Reproduction.

The weightage for the Bio chapter 3, Human Reproduction, in the board exam is 12 marks. Each definitions and concept is followed by the solved and unsolved questions. You can also find the various categories questions like short, very short and long answer type.

Have a look on the Highlights of important terminologies and questions :

Q. 1.   Given below are the events in human reproduction. Write them in correct sequential order. Insemination, gemetogenesis, fertilisation, parturition, gestation, implanation.

Q. 3. At what stage of life is oogenesis initiated in a human male? When does the oocyte complete oogenesis?

Ans. At after the Puberty stage of life is oogenesis initiated in human female. When oocyte change in to Graafian follicle. The process off oogenesis is complete.

Ans. (i)  Spermatogenesis in Males (Human).

Q. 5. What are fertiligin molecules.

Q. 7. What are major components of seminal plasma.

Ans. Seminal fluid is the secretion of accessory sex glands of male i.e. of seminal vesicles, prostate gland and Cowper’s glands. It is rich in fructose, calcium and certain enzyme.

Q. 8. How many eggs do you think were released by the ovary of a female dog which gave birth to 6 puppies.

Ans. The ovaries of a female dog must have released 6 eggs, each of which gets fertilized and so six zygotes are formed, each of which develops in to a puppy.

Q. 1. How is the foetus with Rh positive blood affected if the mother is Rh?

Ans. This disorder pertains to compatibility of blood group and Rh factor, Rh is a protein (antigen) in RBCs of 85% of people (Ru+). They are called Rh+ and other who lack it are Rh-. Rh factor was first discovered in Rhesus monkey marriage between Rh- woman and Rh+ man result in Rh+ foetus. It causes the formation of antibodies against the Rh actor in the development of child. First pregnancy is usually without problem but the subsequent pregenancy proves to be fatal for the child because of  the antibodies already present in mother. Antibodies damage haemoglobin and brain of the child, this result in Erythroblastosis foetalis.

Q. 2. Name any one enzyme that coagulates milk protein in a human adult. Mention the sources and site of action of that enzyme and the products formed.

Ans. Enzyme that coagulates milk is rennin. It is secreted by gastric–gland of mucous membrane of the stomach of human beings. If acts in the stomach and coagulates the mile i.e., converts casein to caseinogens (insoluble protein).

Q. 3. What forms the corpus luteum? Name the hormones secreted by it.

Ans. Egg cell (ovum) of human female after maturation gets covered by a thick layer of yellow lipids (fats). It is called corpus leutum. It secretes the progesterone this progravid phase prepares itself for implantation.

Q. 4. What structure forms the ‘corpus luteum’ and at what stage? Name two hormones secreted by it.

Ans. On the 15th day of onset of menstrual cycle, a matter red ovum (egg cell) is released. Ovum covered by a number of layer and a yellow fat layer forms corpus leutum. It releases (secretes) progesterone.

Q. 5. Draw the diagrammatic section of seminiferous tubules with levels. 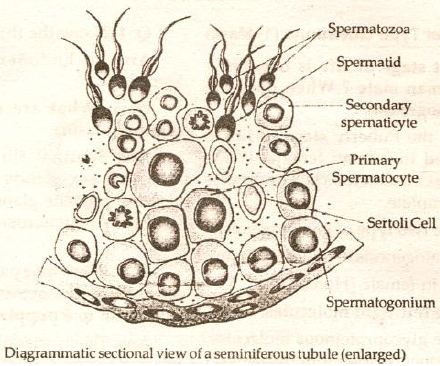 Q. 6. Draw the sectional view of female pelvis with levels. 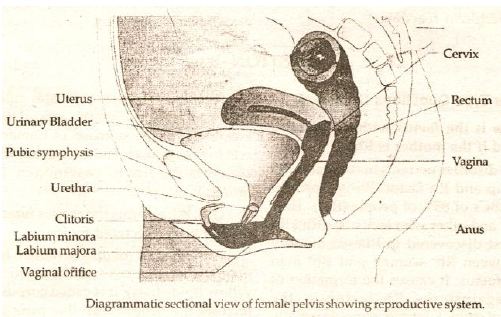 Q. 1. Draw the labeled diagramme of foetus within uterus? 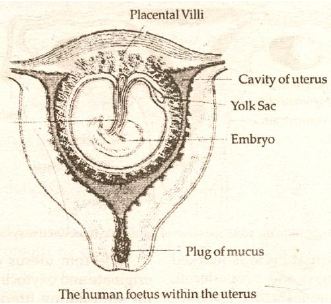 Q. 2. Draw a labeled diagramme of the microscopic structure of a  human sperm? 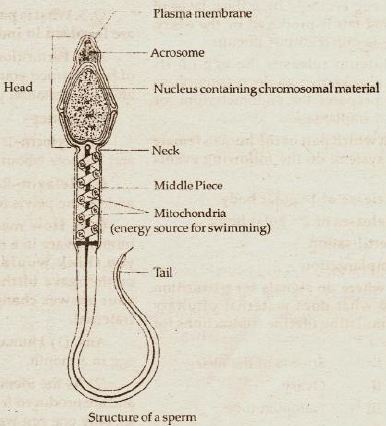 Q. 3. Why is second half menstrual cycle called secretary phase in human female. List the changes that occur in uterus during the phase. 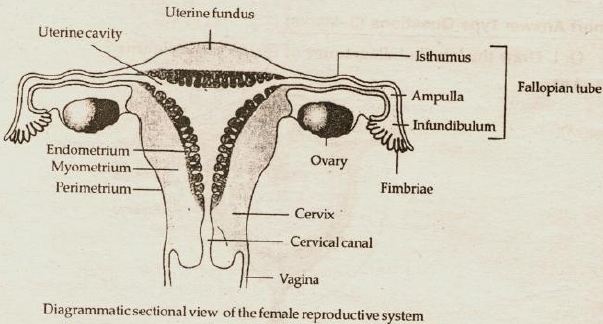 Second half of menstrual cycle is marked by the secretion of estrogen and progesteron, hence called secretory phase. During secretory  phase which is under the control of progesterone and estrogen, egg enclosed by a thick layer of yellow coloured fats in producted by the ovary. This structure is called corpus luteum. Corpus luteum releases the egg on its rupture. It is also known as Regressing-phase as this phase prepares the endometerium for pregnancy and implantation.

Q. 4. (a) In which part of the human female reproductive system, do the following events take place?

(b) From where do signals for parturition originate and what does maternal pituitary release for stimulating uterine contractions for child birth?

(b) From uterus do signals for parturition originate and oxytocin maternal pituitary release for stimulating uterine contractions for child birth.

Q. 5. What is parturition? Which hormones are involved in induction of parturition.

Ans. Parturition is the process of expelling of fully formed young from the mother’s uterus after the gestation period.

Oxytocin- It stimulates forceful of uterus and induces labour pain.

Q. 6. How many eggs are released by a human ovary in a month ? How many eggs do you think would have been released the mother gave birth to identical twins, would your answer change if the twins born were fraternal.

Ans.  Human ovary produces only one egg in a month. As the identical Twins are monozygotic and are produced from two parts of same zygote so, only one egg was released from the ovary. As the fraternal twins are dizygotic and are produced from two different zygotes which is possible only if two eggs are released from the ovaries in a months.

Q. 7. In our Society the women are often blamed for giving birth to daughters, canny u explain why this is not correct.

Ans. It is not correct to blame the woman for giving birth to daughters because a female homogametic sex and produces only one type of eggs, each having 22 autosomes and one X chromosomes. On the other hands, a male is a heterogamety ex as produces two type of sperms that is 50% with X chromosome and 50% with Y chromonsomes, the sex of baby depends upon the type of sperm fusing with the eggs, so sex of baby is determined by father and not mother.

Q. 1. (a) when and where does spermatogenesis in a human begin to take place.

(b) With the help of schematic labeled diagrams trace the development of mature spermatozoa in human male.

(c) Describe the structure of a human sperm.

Ans. (a) In testis, the immature male germ cells (spermatogonia) produce sperms by spermatogenesis that begins at Puberty. 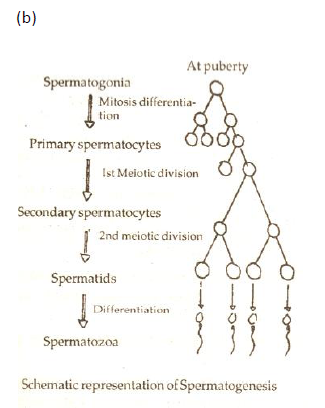 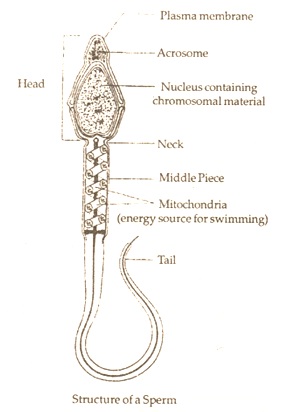 Q.2. (a) Draw a labeled diagram of a sectional view of human seminiferous tubule.

(i) time of initiation of the process.

(ii) products formed at the end of the process. 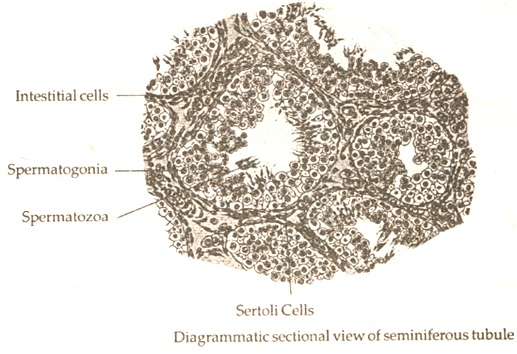 Q. 3. The events of menstrual cycle are represented below, answer the questions from the following diiagramme. 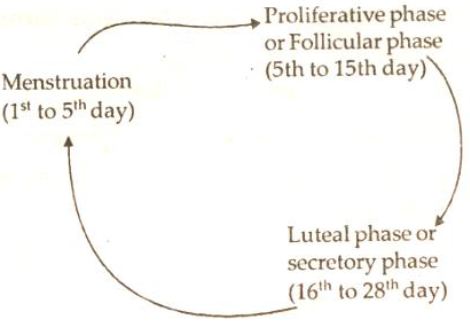 (i) State thee levels of FSH, LH and Progesterone simply by mentioning high or low, around

(ii) In which of the above mentioned phases does the egg travel to the fallopian tube?

(iii) Why is there no menstruation upon fertilization?

(ii) In proliferative Phase or follicular phase egg travel to the fallopian tube.

(iii) No, Menstruation upon fertilisation. Because when the menstrual cycle stop and there is no menstruation. In absense of fertilisation, the corpus Luteum degenerates and this condition called menopause.

Q. 4. Give a schematic representation of oogenesis in humans. Mention the number of chromosomes at each stage. Correlate the life assesses of the individual with the stages of the process.

Ans. (i) It is formation of Ova in the Graffian follicles of ovary and has following phases. 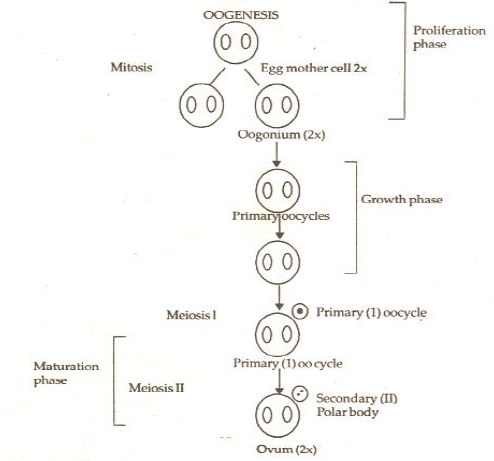 Multiplication phase-The egg mother cell multiplies by mitosis to form oogonia which grow in the follicles.

(ii) Growth phase-In it an oogonium grows in to a large primary oocytes by getting nourishment from follicle cells.

Now the follicle ruptures to release secondary oocytes Meiosis II occurs after sperm entry and forms the haploid large ovum and a small polar body. Polar bodies have no function and degenerate. 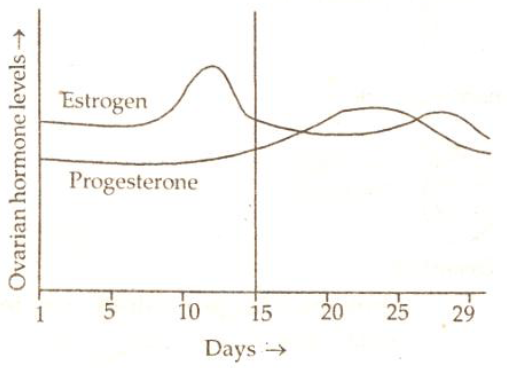 (a) Read the graph given above and correlate the uterine events that take place. according to the hormonal levels on

(2) Specify the sources of the hormones mentioned in the graph.

(b) Describe the structure of ovum fertilisation and passage 'n fallopian tube.

Ans. (a) (i) Estrogen first increase and then decreases but progesterone almost remains constant.

(b) (i) Secretion of estrogen' by the growing follicles. 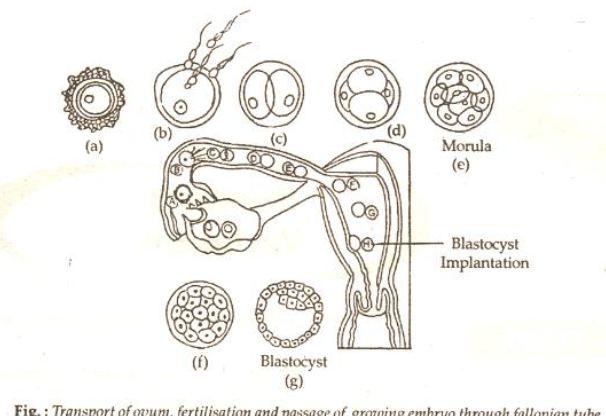 (ii) Difference between Blastulation and gastrulation.

(iii) Mention the function of fallopian tube.Uterus and Vagina.

(iii) Fallopian tube: These conduct the ovum towards the Uterus and Ovum may be fertilized by a sperm in it.

Uterus: The fertilized ovum at the blastocyst stage gets implanted on the wall of the Uterus and develops into the growing foetus   during pregnancy.

Vagina: It receives the semen from the male during mating. During child birth, it conveys child to the outside.