Important MCQs from CBSE Class 9 Science Chapter 6 - Tissues are provided here to prepare for the objective type questions for the Science Annual Exam 2020.

Important MCQs on Class 9 Science Chapter 6 Tissues are provided here with answers. Students must solve these questions to brush up their fundamental concepts so that they may get prepared to attempt the objective type questions correctly in the Science exam.

Check below the important MCQs on Class 9 Chapter - Tissues

1. Tissue is a group of similar kind of cells specialized to perform a particular function in the body. Therefore presence of tissues in a multicellular organism ensures:

(b) Division of labour

Answer: (b) Division of labour

2. Given below is a diagram showing the structure of a neuron tissue. 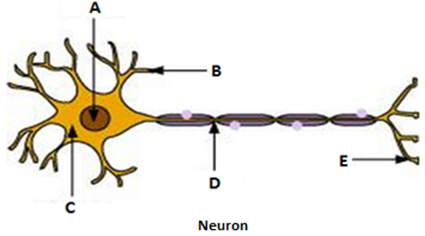 Choose the correct labeling for the parts A, B, C, D and E.

3. Lysosome is a cytoplasmic organelle containingenzymesthat break down biological polymers.  Lysosomes function as the digestive system of the cell. It is also called the suicide bag of the cell because:

(a) It causes any cell to commit suicide

(b) Its enzymes digest the cell itself

Answer: (b) Its enzymes digest the cell itself

4. While doing work and running, you move your organs like hands, legs, etc. Which among the following is correct?

Answer: (d) Skeletal muscles contract and pull the tendon to move the bones

5. Cardiac muscleis one of the three major types of muscles, the others being skeletal and smooth muscles. It is found in the walls and histological foundation of the heart. Which one of the following statements is not related to the cardiac muscles?

(a) They muscles show rhythmic contraction and relaxation throughout life.

(b) They do not work according to our will, so they are called involuntary muscles.

(c) They are non-striated, multinucleated and branched muscles.

(d) The contraction and relaxation of the heart muscles help to pump and distribute blood to    different parts of the body.

Answer: (c) They are non-striated, multinucleated and branched muscles

6. In a test of biology a figure of smooth muscle labeled as A, B, C and D for different parts of the muscles. Four students P, Q, R and S in a way to attempt the question named the four parts as given below. But only one student could name all the four parts correctly. 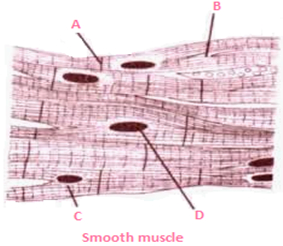 Which of the following options is the answer written by that student?

7. Which of the following statements is incorrect?

i. Parenchyma tissues have intercellular spaces.

8. Xylemis the specializedtissue of the plants that transports water and nutrients from the soil to the upper parts like stems and leaves of plant and provides mechanical support to them. It is composed of four different types of the cells. Which of the following is not one a type of cell found in xylem tissues?

9. A person met with an accident in which two long bones of his hand were dislocated. Which among the following may be the possible reason for this?

(b) Break of skeletal muscles tissue

10. Tiny pores are found on the surface of the leaves of plants. These pores are called stomata. These stomata surrounded by the kidney shaped guard cells provide many vital functions to the plants. 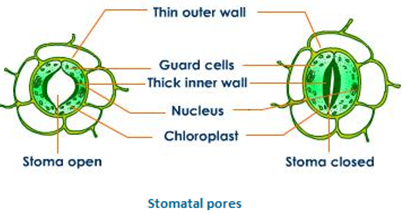 Which of the following functions is not served by the stomata for the plants?

(a) Exchange of gases, particularly CO2 and O2, with atmosphere

(b)  Loss of water in the form of vapours during transpiration

(c) Helps to create pressure for the water to rise upward, by its process of transpiration

(d) Helps the leaves to carry out the process of photosynthesis

Answer: (d) Helps the leaves to carry out the process of photosynthesis

11. Epithelial tissue always has an exposed outer surface and an inner surface anchored to connective tissue by a thin, non- cellular structure called the

12. Meristemetic tissues are those which help in increasing the length and girth of the plan. Which of the following statements given below is correct about the meristematic tissue?

(c) It is composed of single type of cells

(d) It is composed of more than one type of cells

Answer: (b) It is made up of cells that are capable of cell division

13. Connective tissues are the tissues that help to bind or connect other tissues in the body. They have widely spaced cells embedded in a matrix having a variety of proteins, polysaccharides and mineral salts. Can you identify the connective tissues among the following?

14. Simple epithelium is a tissue, which form the outer protective layer of the skin of the animal body, is composed of cells which are

(a) Hardened and provide support to organs

(b) Continuously diving to provide to form an organ

(c) Cemented directly to one another to form an irregular layer

(d) Loosely connected to one another to form an irregular layer

Answer: (c) Cemented directly to one another to form an irregular layer

15. If the tip of the sugarcane plant is removed from the field, even then it keeps on growing in length. It is due to the presence of: