Get here Important MCQs on Class 9 Science Chapter 5 - The Fundamental Unit of Life to help you prepare for the upcoming Science Annual Examination.

In this article, we are providing you the MCQs on Class 9 Science Chapter 5: The Fundamental Unit of Life with answers. All these questions will help you revise the important topics and concepts for the objective type questions which will appear in Class 9 Science paper under the CBSE Annual Exam.

Check below the important MCQs on The Fundamental Unit of Life Class 9:

(d) The concentration of water molecules does not matter.

2. Which of the following statement marks as a difference between plant cell and animal cell?

(a) Plant cells have cell wall which animal cells do not.

(b) Plant cells do not have vacuole while animal cells do have.

Answer: (a) Plant cells have cell wall which animal cells do not.

3. Endoplasmic reticulum one of the cell organelles, exists as a membranous network that extends from outer membrane of nucleus to the plasma membrane making a connection between them. 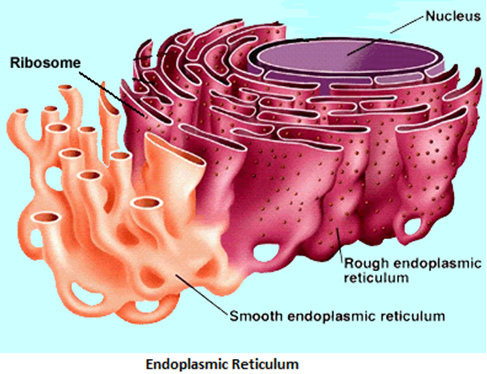 Which of the following statements is not related to the endoplasmic reticulum?

(a) It behaves as transport channel for proteins between nucleus and cytoplasm.

(b) It transports materials between various regions in cytoplasm.

(c) It can be the site of energy generation.

(d) It can be the site of some biochemical activities of the cell.

Answer: (c) It can be the site of energy generation.

4. Osmosis is a process by which molecules of a solvent tend to pass through a semipermeable membrane from a less concentrated solution into a more concentrated one. Can you pick out the option among the following which does not belong to this process?

(a) The movement of water across a semipermeable membrane is affected by the amount of substances dissolved in it.

(b) Membranes are made of organic molecules such as proteins and lipids.

(c) Molecules soluble in organic solvents can easily pass through the membrane.

5. The nucleus controls all the activities of the cell and acts as a site of DNA material and protein synthesis. It is composed of some components which all together give the nucleus its functionality. Here is shown a figure of nucleus with some of its components labeled as A, B, C and D. can you name these components correctly? 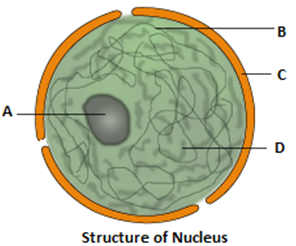 6. You must have observed that a fruit when unripe is green but it becomes beautifully coloured when ripe. According to you what is the reason behind this colour change.

(a) Chloroplasts change to chromosplasts

(b) Chromosplasts change to chromosomes

Answer: (a) Chloroplasts change to chromosplasts

7. Rahul’s mother was going to make pickle. For this she cut the vegetables into small pieces and put them in the sun for few hours. Rahul was observing all her activities very curiously and asked his mother if why she had put the salted vegetables in the sun. among the following what might be the most appropriate answer for his question?

(a) So that the pickle may get extra flavour.

(b) So that the cut vegetables may absorb the vitamin d as a nutrient from the sun rays.

(c) So that the vegetables may lose all the water by diffusion and evaporation and become dry.

(d) So that the salt may get evenly and properly absorbed by the vegetables.

Answer: (c) So that the vegetables may lose all the water by diffusion and evaporation and become dry.

8. The process of plasmolysis in plant cell is defined as:

(a) Breakdown of plasma membrane in hypotonic solution.

(b) Shrinkage of cytoplasm in hypertonic medium.

Answer: (b) Shrinkage of cytoplasm in hypertonic medium.

9. Mitochondria are the sites of respiration in the cell. They oxidize carbohydrates and fats present in the cell to produce carbon dioxide, water and a lot of energy. The energy so released is stored in the form of ATP molecules. Since mitochondria in the cell are used to synthesize energy so, they are also called:

(a) Energy currency of the cell

(b) Energy generator of the cell

(c) Kitchen of the cell

(d) Power house of the cell

10. Cell is the structural and functional unit of life. The word cell is derived from the Latin word ‘cellula’ which means “a little room”. Can you name the scientist who coined the term cell?

11. In a test, a teacher collected the answers written by four students as the definition of osmosis as given below. Read carefully and select the correct one.

(c) Movement of solvent molecules from higher concentration to lower of solution through a permeable membrane.

12. Among the following statements which one is incorrect?

(a) Golgi apparatus is involved with formation of lysosomes.

(b) Nucleus, mitochondria and plastid have DNA, hence they are able to make their own structural proteins.

(c) Lysosomes are called the suicide bags as they eat up their own cells.

Choose the correct option among the following:

14. A vacuole is a space or cavity within the cytoplasm of a cell, enclosed by a membrane and typically containing fluid. They are a kind of storage sacs that are very large sized in plant cell as compared to that in the animal cell.

Which among the following is not a function of the vacuole?

(a) They help to store the toxic metabolic by-products of the plant cell.

(b) They provide turgidity and rigidity to the plant cell.

(c) They help to maintain the osmotic pressure in the cell.

(d) They help the plant in its growth by the process of cell division.

Answer: (d) They help the plant in its growth by the process of cell division.

15. The proteins and lipids, essential for building the cell membrane, are manufactured by: