D-Block elements/ Transition elements: Properties and explanation of How and Why?

Every year questions are being asked in nearly all the competitive examinations like NEET, JEE, UPTU, WBJE, etc. from d-block element. Get the complete notes on the d block elements or transition elements and their important characteristics with why and how explanations.

Every year questions are being asked in nearly all the competitive examinations like NEET, JEE, UPTU, WBJE, etc. from d-block element.

D-block elements occupy the space between the s-block (most electro positive) and p-block (most electro negative) in the periodic table. Since they bridge the two blocks and show a transition in the properties from the metals to the non-metals, they are also called Transition elements. 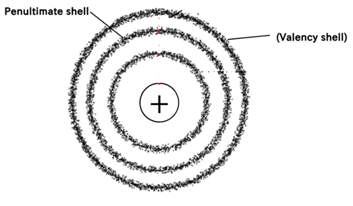 Any element which has incompletely filled d-orbital in its ground state or in one of the most common oxidation state.

The configuration must be d1 to d9

if the configuration is d0 to d10 , it cannot be a transition element

So, from above explanation, these all 3 elements are not transition elements

As we move from left to right, atomic radius decrease first because of increment of effective nuclear charges and after that it becomes constant (due to the poor shielding effect of d-electrons) and then after it starts increasing towards end because of the e-- e- repulsion which are higher as compare to the increase in the effective nuclear charge.

So, the trend of change of the atomic radius within the transition series is: decrease, constant and then increase

Transition elements can form alloy because of almost same size, so one atom can take the place of other atom in the crystal lattice.

The energy gap between : (n-1) d and ns orbital is very small so, electron from both the orbital can participate in bonding and therefore they can show variable oxidation states

Density is also high because of presence of unpaired electrons

Enthalpy of atomization is high in transition elements and the reason is again the presence of unpaired electrons.

Eg: when we will move from left to right means from Sc to Zn, the enthalpy of atomization will increase till Mn and then decrease towards the end that is Zn.

So moving from left to right, the number of unpaired electrons will increase till Mn and then decrease till Zn.

Because of their small size, high charge and presence of vacant d-orbital

Reason:  due to the defects in the crystal lattice

Eg: In hydrogenation reaction, Ni-Pt and Pd are being used as catalyst

In contact process, V2O5 is used as catalyst which is transition compound

Transition elements shows variable oxidation states and it is possible when they will form the intermediate during the reaction.

Concept: lower the ionization energy of the transition element, more will be the stability of transition compounds

Let’s compare the +4 oxidation state for Ni and Pt.

Let us discuss the electrode potential and oxidation state:

Concept: Lower the electrode potential; grater will be the stability of higher oxidation state of the metal in aqueous solution.

Eg: let us see the Electrode potential of few transition elements given below

Arrange the given metal ions according to their stability?

In case of Mn+3/ Mn+2, Mn+2 is having d5 configuration which is half filled and because of the same, this configuration is more satiable and hiving highest E0 value

Let’s have a look on the few questions based on the oxidation states.

Q. Why Cu+ is unstable in aqueous solution?

Ans: it undergoes disproportionation reaction (same species gets oxidised as well as reduced)

Then why Cu+2 is more stable than Cu+ , although the ionization energy of Cu+2 is much higher than Cu+

Conclusion: here we have covered all the important features of d-block elements and also discussed the few important questions. It is very important to get the clear concept about the topic of this chapter.

For such informative notes and other study material in English and Hindi language, keep visiting jagranjosh.com

Rajasthan Board: Class 10 and Class 12th

Maharashtra Board: Class 10 and Class 12th