Writing a jingle on the topic of Jeans was the last thing Meghna thought she would be doing as part of her undergraduate course in Electrical and Electronics Engineering at SRM University, Chennai! She was one of the 4625 studentswho took a new online test to evaluate employability skills: Soft skills, Reasoning, Verbal and Quantitative aptitude and Communication skills, as part of a new Learning Management System (LMS) designed and developed by the university,  ‘empower srm’, that was launched on 26 March, 2014.“It was convenient to access, user friendly, and fun to learn personality development this way, certainly better than learning from a book”, said Meghna, who went on to win one of the prizes in the jingle writing test.

‘empower.srm’ is the university’s new tool to prepare students to face the real world, leading up to campus placement and beyond. After all these transferable skills become part of ones DNA and remain as indelible parts of one’s persona, giving shape and meaning to  one’s journey through career and life in general.A positive personality disposition and strong communications skills is sure to pip one to the finishing line over someone who does not possess these traits. 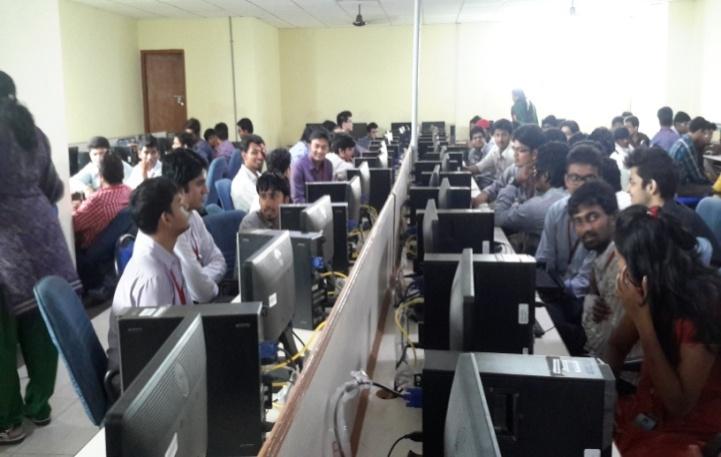 How long can the nation afford to ignore the stark reality of what lies buried underneath this harsh statistic: that of the 550,000 engineering graduates passing out each year, anywhere from 10 % to 25 % are not readily employable by any technology firm in the country? (NASSCOM study).How long before the USD 1 billion a year investment made by the USD 60 billion outsourcing industry to train these graduates from the many campuses that they recruit from each year, will begin to hurt?

Even with record placements of over 4000 graduates each year, SRM had to scale up the grooming process to cater to the nearly 7000 students who flock to join the university each year. The Career Development Centre (CDC) has been offering PersonalityDevelopment courses as part of the curriculum, covering every dimension of the skills needed for gainful employment: Soft skills, verbal and quantitative aptitude and communication skills. These have to go in tandem, progressing seamlessly over a significant part of the students’ academic journey, over 6 semesters, or nearly three-fourths of the total time spent at the undergraduate degree level.

What ‘empoer.srm’ does is that it provides for scale of operation that no other platform is able to, by using ITas an enabler for reach, distribution and numbers. It also had to provide for an inbuilt evaluation system.In such a scenario, the classroom becomes irrelevant, as access is through mobile, tablet or PC/laptop. A significant spinoff  is the time saved from classroom teaching, freed up for other activity to take place, like round table discussions among peers and the faculty.“The students have wholeheartedly welcomed this shift as it gives them time to hone and build their spoken and presentation skills. They also welcomed the fact that the tests have been aligned to the placement process, but with a soft touch, aimed at building their skills”, shared Dr Mythili, Head, Career Development Cell, and the architect of the project. That the content for soft skills has been tested with help from the first year students, gives the process greater applicability and acceptance.

The new platform was formally launched by Dr.Athulan, CTO of Systems Insights, on 26 March 2014. To make the learning process more interesting and competitive, the top 25 best entriesreceived the ‘Best Creative Award’ from the chief guest who spoke about the importance of creativity and innovation in learning.“LMS will be instrumental in shaping the soft skills of the students, and how they would always have the choice of the content and the topic they want to learn”, remarked Dr Athulan.

That the LMS will be the new torch bearer of career development at the university has been underscored by the enthusiastic response of the students to this new way of learning, built through customizing content in-house, and integrating with open source software. The content is focused on tapping the creativity of the students, as for example ‘Tweet a Story ‘had to be completed in 199 characters, in an interesting and engaging way.Results are made available soon after the test is taken, providing for immediate benchmarking, thereby enabling the students to conduct self-evaluations, identify their weak areas and work towards improvement.The LMS is now an integral part of the university’s curriculum blending personality development programme stretching over six semesters, to enhance the employability skills of students and to prepare them to face the real world after they complete the course. Also on the cards is a video based self-learning module leading to preparation of their cv’s, in time for the placement process. The student will remain the focal point of new innovations in learning and preparing them for careers in the 21st century.