Banking General Awareness section is the vital section for any bank recruitment exam. It is considered one of the scoring sections in bank exams. In order to help in your preparation, here the banking team of jagranjosh is providing top five banking news of last ten days.

Banking General Awareness section is the vital section for any bank recruitment exam. It is considered one of the scoring sections in bank exams. To crack this section, candidates need to update their current affairs of the national and international importance along with the banking industry.

In order to help in your preparation, here the banking team of jagranjosh is providing top five banking news of last ten days. Candidates who are appearing for IBPS PO Mains exam must go through the below notes.

Prime Minister Narendra Modi announced that 1000 and 500 rupees notes will cease to be legal tender from midnight 8-9 November 2016.

Mr. Modi in his announcement appealed that those who are in possession of these notes can deposit the notes in their accounts in banks and post offices from 10 November to 30 December 2016. He also said that those who are unable to deposit the notes within the deadline for some reasons can change them till 31 March 2016 by furnishing ID proof (Aadhaar card and PAN card).

Besides, he also announced that new currency notes of 500 and 2000 rupees denomination will be introduced.

The major objective behind the Government's decision to ban the existing currency denomination is to curb black money in the market and cease out face currencies.

The Reserve Bank of India on 8 November 2016 issued new series of notes for 500 rupees and 2000 rupees denomination with improved features and newer sizes. Both the designs will be very friendly towards the visually-impaired by having features which make it accessible for all sections.

The RBI said, 2000 rupees note, which is a first under the denomination, will be called as the 'Mahatma Gandhi (New) Series' and has a design of the low-cost mission to Mars, the Mangalayan, on the reverse. It said that the base colour of the note will be magenta.

The salient features of the banknotes will be as under:

• See through register with denominational numeral 2000.
• Latent image with denominational numeral 2000.
• Denominational numeral २००० in Devnagari.
• Portrait of Mahatma Gandhi at the centre.
• Micro letters ‘RBI’ and ‘2000’ on the left side of the banknote.
• Windowed security thread with inscriptions ‘भारत’, RBI and 2000 on banknotes with colour shift. Colour of the thread changes from green to blue when the note is tilted.
• Guarantee Clause, Governor’s signature with Promise Clause and RBI emblem towards right.
• Denominational numeral with Rupee Symbol, 2000 rupees in colour changing ink (green to blue) on bottom right.
• Ashoka Pillar emblem on the right.
• Mahatma Gandhi portrait and electrotype (2000) watermarks.
• Number panel with numerals growing from small to big on the top left side and bottom right side.
• For visually impaired.
• Intaglio or raised printing of Mahatma Gandhi portrait, Ashoka Pillar emblem, bleed lines and identity mark.
• Horizontal rectangle with 2000 rupees in raised print on the right.
• Seven angular bleed lines on left and right side in raised print.

Reverse (Back)
• Year of printing of the note on the left.
• Swachh Bharat logo with slogan.
• Language panel towards the centre.
• Motif of Mangalayan.
• Denominational numeral २००० in Devnagari.
• Dimension of the banknote will be 66 mm × 166 mm. 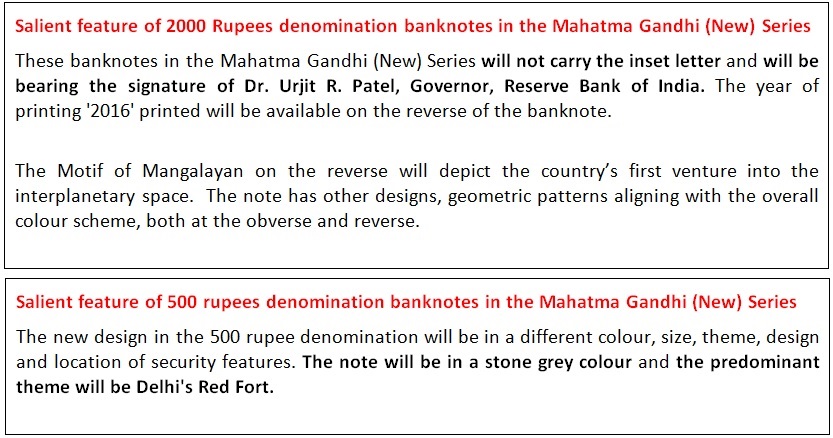 Highlights of the Debt Recast of HCC

• Under this debt recast of HCC, 52 percent of the debt was found to be sustainable and can be serviced as per original terms and conditions including interest rate and tenure.
• Out of the remaining 48 percent debt, 1000 crore rupees debt will be converted into equity for banks, which could eventually give them 25 percent stake in the company’s post-scheme equity capital.

About Scheme for Sustainable Structuring of Stressed Assets (S4A)

• The S4A scheme was launched by RBI to resolve the corporate debt problem and strengthen the lenders’ ability to deal with stressed assets.
• Under this scheme, a company’s debt is bifurcated into two parts sustainable and unsustainable based on the cash flows of the company’s project.
• The sustainable debt cannot be less than 50 percent of existing debt and will have to be serviced over the same terms as that of existing facilities.
•  The unsustainable debt can be converted into equity, Optionally Convertible Debentures or Redeemable Optionally Convertible Preference Share with clearly spelt out terms.
•  Banks can sell this stake or equity to a new owner who will have the advantage of getting to run the business with a more manageable debt.
• Under this scheme, RBI also constituted advisory body called Overseeing Committee (OC) to review the resolution plans submitted by the Banks.

Reserve Bank of India (RBI) on 27 October 2016 permitted startups to raise external commercial borrowings (ECBs) of up to USD 3 million in a financial year. Under this, Funds can be raised with a minimum maturity of 3 years.

The move is aimed at boosting innovation and promoting job creation. The RBI said while issuing norms for ECB route for startups that the borrowing should be denominated in any freely convertible currency or in Indian Rupees (INR) or a combination thereof.

• In case of borrowing in INR, the non-resident lender, should mobilise INR through swaps/outright sale undertaken through bank in India.
• The regulator has not prescribed any cost-ceiling or restriction on the end use of the funds raised. Such conditions are applicable to borrowings by companies across most other sectors.

Who can be a Lender?

As per the RBI notification, lender/investor shall be a resident of a country who is either a member of Financial Action Task Force (FATF) or a member of FATF-Style Regional Bodies.

5. CVC asked banks to report frauds of Rs one crore and above

The Central Vigilance Commission (CVC) in October 2016 asked the public sector banks to share their reports relating to all loan frauds involving funds over one crore rupees. Till date, such reports were shared with the Reserve Bank of India (RBI) only.

With this, the banks will have to report the modus operandi of all the alleged frauds to the CVC, which will share these details with other banks to prevent such cases being repeated.

Besides, the commission also decided to call regular monthly meetings of senior officials of Reserve Bank of India (RBI), CBI and banks to monitor probe in suspected bank frauds of 50 crore rupees and above.