Indian Geography portion is the most critical part and covers most of the syllabus for the IAS Prelims Exam. So, Geography should be prepared from standard sources. Here, we are providing some questions from standard books.

Indian Geography is so vast in its syllabus that it covers most section of the General Studies for the IAS Prelims Exam. The candidates cannot overlook the geography portion because there are various aspects of geography which can be of significant help in the overall General Studies Preparations. So, it’s advisable to prepare geography from standard sources starting with NCERTS.

Orientation of geography is mostly scientific and hence only the candidates having comprehensive understanding of the subject can answer all the questions of geography for the IAS Prelims Exam.

Q1.Which type of volcanic eruptions is responsible for Deccan Trap formations in the Indian peninsular region?

Flood Basalt volcanoes contains highly fluid lava that flows for long distances.. There can be a series of flows with some flows attaining thickness of more than 50 m. Some parts of the world are covered by thousands of sq. km of thick basalt lava flows Individual flows may extend for hundreds of km.

The Deccan Traps from India, presently covering most of the Maharashtra plateau, are a much larger flood basalt province. It is believed that initially the trap formations covered a much larger area than the present.

Q2. Which of the following statements is correct regarding the type of volcanic eruptions?

Basaltic eruptions are characterized by low gas content and low viscosity magmas. If the viscosity is low, non-explosive eruptions usually begin with fire fountains due to release of dissolved gases. They occur at mid-oceanic ridge and hot spot volcanism. Basalt is highly fluid –mobile and spread across quietly.

When magma reaches the surface of the earth, it is called lava and it flows downhill in response to gravity as it’s in liquid state. Different magma types behave differently as lava flows, depending on their temperature, viscosity, and gas content.

Explosive or andesitic eruptions are favored by high gas content and high. Explosive bursting of bubbles will fragment the magma into clots of liquid that will cool as they fall through the air.  These solid particles become pyroclasts (meaning - hot fragments) and tephra or volcanic ash, which refer to sand- sized or smaller fragments.

They occur at volcanic arcs and volcanic mountains. Andesitic is less fluid mobile and solidifies at short distance due to intense pressure developed inside.

Q3. Which of the following term regarding intrusive volcanic landforms are correctly matched?

d)  All are correct.

Laccoliths are large dome-shaped intrusive bodies with a level base and connected by a pipe-like conduit from below.

Lopoliths are formed when the lava moves upwards, a portion of the may tend to move in a horizontal direction wherever it finds a weak plane and develops into a saucer shape concave to the sky body.

Phocoliths are wavy mass of intrusive rocks found at the base of synclines or at the top of anticline in folded igneous country.

The near horizontal bodies of the intrusive igneous rocks are called sill or sheet, depending on the thickness of the material.

Dykes are formed when the lava makes its way through cracks and solidifies almost perpendicular to the ground.

Calderas are the most explosive volcanoes. They are usually so explosive that when they erupt they tend to collapse on themselves rather than building any tall structure. The collapsed depressions are called calderas.

Flood Basalt Provinces are volcanoes outpour highly fluid lava that flows for long distances. There can be a series of flows with some flows attaining thickness of more than 50 m. The Deccan Traps from India, presently covering most of the Maharashtra plateau, is a much larger flood basalt province.

Dykes are formed when the lava makes its way through cracks and solidifies almost perpendicular to the ground. It gets cooled in the same position to develop a wall-like structure.

Click Here for geography quiz on interior of the earth

Q5. Which of the following is not the reason to induce as earthquake?

a) Reemergence of old fractures in the craton.

d) All the above can be probable reason to induce quakes.

Mostly earthquakes are caused due to plate boundary interactions like compressive, divergent and transverse boundary.

Earthquake-like seismic waves can also be caused by explosions underground. These explosions may be set off to break rock while making tunnels for roads, railroads, subways, or mines. The largest underground explosions, from tests of nuclear warheads (bombs), can create seismic waves very much like large earthquakes.

Q6. Consider the following statements regarding the types of earthquakes:

In the areas of intense mining activity, sometimes the roofs of underground mines collapse causing minor tremors. These are called collapse earthquakes. Ground shaking may also occur due to the explosion of chemical or nuclear devices. Such tremors are called explosion earthquakes.

The earthquakes that occur in the areas of large reservoirs are referred to as reservoir induced earthquakes.

Q7. Which of the following statements regarding measurement of earthquakes are correct?

a) The point directly above the focus on the surface is called the epicenter. It the first point to obverse the waves.

b) The richer scale relates to the energy released during quake.

c)  The intensity scale relates to the amount of damage caused.

d) All statements are true.

The release of energy occurs along a fault. Rocks along a fault tend to move in opposite directions. As a result, the blocks get deformed and eventually, they slide past one another abruptly. This causes a release of energy, and the point where the energy is released is called the focus of an earthquake, alternatively, it is called the hypocentre. The point on the surface, nearest to the focus, is called epicentre. It is the first one to experience the waves. It is a point directly above the focus.

Q 8.Which of the following statement regarding the Pacific Ring of Fire are correct?

a)  The Ring of Fire is a direct result of plate tectonics that is the movement and collisions of lithospheric plates.

b)  It is the most seismically active region of the world as about 90% of the world's earthquakes occur along the Ring of Fire.

c)  The active seismic region of the Indian Himalayas also considered as part of pacific ring of fire.

In the horseshoe shape, it is associated with a nearly continuous series of oceanic trenches, volcanic arcs, and volcanic belts and plate movements. It has more than 75% of the world's active and dormant volcanoes and about 90% of the world's earthquakes occur along the Ring of Fire. 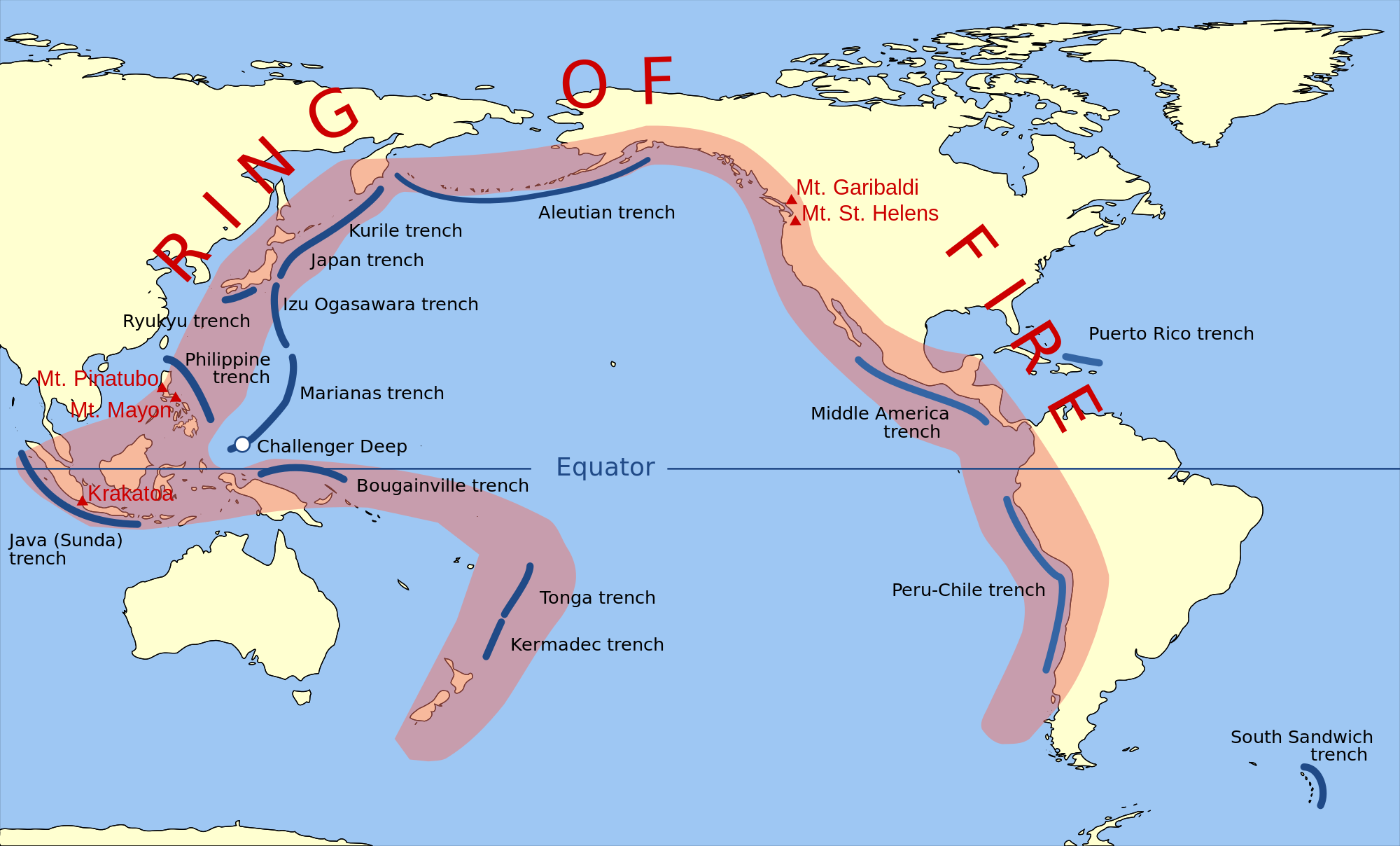 The Ring of Fire is sometimes called the circum-Pacific belt. The next most seismically active region (5–6% of earthquakes and 17% of the world's largest earthquakes) is the Alpide belt, which extends from Java to the northern Atlantic Ocean via the Himalayas and southern Europe.

Q9. Consider the following statements regarding the geological phenomenon tsunami?

The most relevant reason/ cause of tsunamis are large earthquakes at the seafloor, when large slabs of rock are forced to move past each other suddenly causing the overlying water to move. The resulting wave moves outwards and away from this event. Underwater landslides can cause tsunami, and so can land which slumps into the ocean.

The phases of tsunami are shown in the below image: 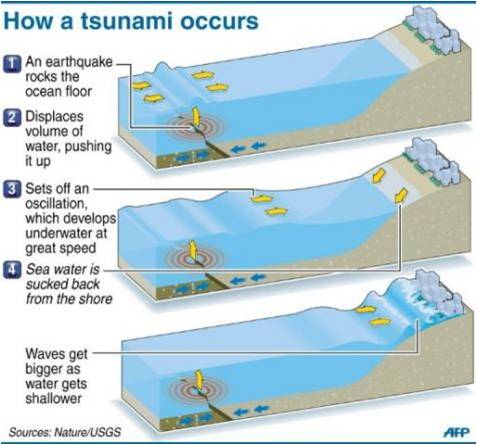 Q10. Match the following famous places with type of volcanism:

The basaltic highly mobile magma from deep interior is erupted on a fixed hot spot as plate move forming the Island arc in the direction of plate movement. Examples of these island arcs are Hawaii, Reunion, Kurile, Aleutian etc

The Breaking up of Mediterranean plates into multiple blocks causes frequent interactions and andesitic eruption for examples Mt. Etna and Mt. Vesuvius.